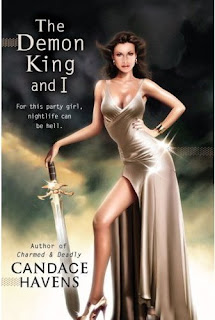 The Caruthers sisters are heiresses with privilege, wealth, beauty, and brains. But these party girls have something extra. As the Guardian Keys, possessors of an ancient family secret, they hold the fate of the world in their hands.

Gillian, the eldest, is a sensation in the art world – this world, that is. In her other world she’s the Assassin, a knockout who snuffs out dimension-jumpers who foul up her personal space. She never expected to join forces with one. But when a plague of murderous demons plunges the earth in darkness, she has no choice but to get a little help from a being who knows his stuff.

Gillian and her 3 sisters are rich, very powerful figures in society but they’re also these Guardians that keep Earth safe. When beings from other worlds come through a portal into our world they are alerted and the being is either ushered back to their world or they are killed. Each sister is in charge of a different world. For Gillian it is the demon world.

Gillian meets the demon king when she is summoned by him. The new king, Arath, is more human looking than any species of demon she’s ever seen. He’s extremely powerful which he proves time and again.

When a “darkness” (evil) is detected and things start going haywire on earth the sisters must work together to try to fix things. There have been murders on earth and thefts of jewels and artifacts. While they are fixing things on earth, Arath is doing his part on the demon world to try and figure out who is directing this evil. During the time all of this is happening Gillian is fighting an attraction to the new king.

So my thoughts: Yes these sisters were powerful humans fighting for justice in the universe but for a secret that was supposed to be held closely to their family too many people knew about it. Also I thought the “romance” between Gillian and Arath was kind of forced on the reader. They definitely had the attraction thing going on but they really hadn’t had that much time together – next thing you know Gillian’s in love. If they hadn’t brought up love and just made her caring for him it would have been much more believable to me.

Now I did like Arath but there wasn’t enough of him in the book for my liking – he kept popping in and out and we really didn’t get to know him well. I also liked Gillian’s brother, Bailey, but again, he wasn’t in it enough. The sisters – they were ok but I didn’t really form an attachment to them in any way. I’m not sure I’ll want to read any subsequent books.

I was really looking forward to reading this book but it just didn’t end up working for me. There were good parts of the book, but IMO, not enough.

3 responses to “Guest Review: The Demon King and I by Candace Havens”