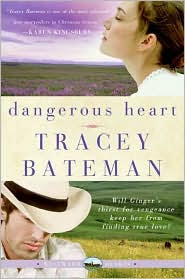 In the conclusion to Tracey Bateman’s riveting Westward Heart series, Ginger struggles between her desire for revenge and her newfound faith, which requires forgiveness. For the past seven years, Ginger Freeman has had one goal: find Grant Kelley and make him pay for allowing her brother to die. When she finally tracks Grant down on a wagon train headed west, it’s just the chance she’s been waiting for. But will new friends, the promise of a new life out west, and her faith in God win over revenge?

This is the last book in the Westward Heart series and I was intrigued enough from the blurb that I wanted to check this out. I think I should have read the other books first because I couldn’t understand Ginger’s attraction to Grant at first. I mean, this is what I knew about Grant and Ginger. Ginger held Grant responsible for the death of her older brother. Ginger thinks up this mighty revenge plan to make Grant pay for killing her brother, or letting her brother die as it is, it takes her 7 years but finally she’s gonna get that sucker. She sees him and she follows him and his little wagon thingy that he’s apart of and she gets herself hired on or added onto the wagon train party heading to the promise land and she gets close to everyone on the wagon train and then finds God.

Part of finding God is forgiving others and now she’s gotta find out what’s more important to her, revenge or avenging her brother’s death or forgiveness.

Seeing Ginger struggle with her feelings for Grant and then her father’s band of outlaws trying to get her back with them made for an interesting story but I found that it didn’t hold my attention. I don’t think that I’m cut out for Christian fiction. I like some, I really like some of it but this wasn’t one that I’d be weeping for joy to show off to my friends. I was pretty bummed that I didn’t like this book as much as I thought I would.

There were times that I wanted to shoot Ginger with her own rifle and then there were times that I just didn’t get Grant’s appeal but for those of you out there who enjoy Christian fiction, (if there are any out there, I doubt they read this blog…or do they?) I recommend you read the first two books in this series before starting this book. This book was really slow to pick up and hard to stay focused on. The characters were lukewarm and didn’t really grab me and the storyline could have been executed better but it wasn’t the worst book ever, I’d say this book was a low C, so about a 2.75 out of 5.

This book is available from Avon. You can buy it here.