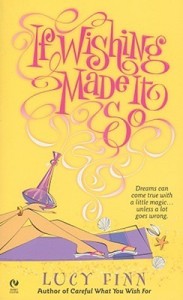 Once voted the girl most-likely-to-succeed, Hildy Caldwell is now the one in the biggest rut. She has let her world get very small: a tiny cottage in rural Pennsylvania, two cats, and a ho-hum job. As for love? Nobody has ever measured up to her football hero high school sweetheart. If only she could meet him again . . .
Knowing that’s wishful thinking, Hildy splurges on a summer rental on Long Beach Island, one of the Jersey shore’s prettiest spots. There, she hopes the wind might blow a handsome man her way. Instead, she finds an abandoned bottle-with a two-thousand-year-old, meddlesome genie inside! Magic and mayhem follow, along with what Hildy’s been wishing for: a meeting with the man she has never stopped loving.
With the genie’s help, Hildy’s dreams might come true. But spells and enchantment have a dark and dangerous side. And Hildy could lose everything-unless she finds out that true love is the best kind of magic.

THOUGHTS/OPINION:
So Hildy finds a genie in a bottle. The problem is, the bottle that Hildy found was accidentally left behind by James Torelli aka Jimmy the Bug, a mob boss who wants his bottle, and his genie, back. Jimmy’s got plans for the genie and pretty much will do anything to get that bottle back.

In the meantime Hildy has run into her old flame from high school, thanks to the genie, and is hoping that things will finally work out between them. Unfortunately Michael is already engaged. In between dodging Jimmy the Bug and Michael’s fiance Hildy and Michael fall back in love.

Hildy throughout the book was not my favorite person. She did get better as the book went along but she just rubbed me the wrong way. She was kind of abrasive at times when I thought she should be softer. She did have a kind heart, she just had a weird way of showing it. Wait, she sounds like me. Lol

Michael was an interesting character. He wanted to see Hildy again, but yet when his fiancé put their wedding announcement into the paper without discussing it with him (they had been engaged for 5 years) he just kind of went with it. He didn’t seem to get a backbone until later in the book and even then I had a hard time thinking that he wasn’t letting people walk all over him. Maybe I’m just so used to the uber-alpha male that reading about a beta didn’t do anything for me. IDK.

Anyway, in the end everyone lived happily ever after, which is always how I like my books to end. Well, at least they lived Happy for Now…for some reason it didn’t seem like a strong enough relationship to stand the test of time. I could be wrong, it’s been known to happen!

Was the author new to you and would you read something by this author again?
Completely new to me. At this point I think I’d have to pass on another book by her.

Are you keeping it or passing it on?
Pass

Did you enjoy the book? Eh…it was mildly entertaining.

Would you recommend this book to others? Probably not

8 responses to “Guest Review: If Wishing Made it So by Lucy Finn”