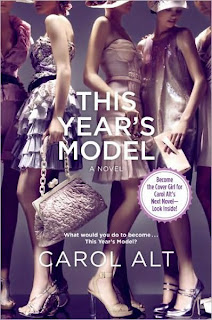 Supermodel Carol Alt takes us on a wild ride through the glamorous, cutthroat world of fashion and fame—in a biting, witty, and absolutely authentic novel that rocks the world of high-end modeling!

Tall, beautiful, practical Melody Ann Croft of Morristown, New Jersey, is busting her behind as a waitress and wishing there was an easier way to earn money for college. When a customer claiming to be a fashion photographer insists she could become a model, Melody is skeptical—and totally shocked when dropping his name actually opens agency doors. Signed up before her head has even stopped spinning, she’s got a new name—Mac—and is off to her first shoot. Could this be that “easier way” at last?

But in modeling, nothing’s easy. Mac faces demanding diva photographers with their body-torturing, day-long sessions, and jealous rivals whose flawless beauty hides sharp claws. There are rumors and lies, lecherous model-collecting playboys, rock stars and drugs, and the most perilous pitfall of them all . . .straight male models! Temptation is everywhere, and even a level-headed Jersey girl may have trouble keeping her footing on the long, hard climb up.

The last book about a model I read, I absolutely detested. You could read my review for that book, here. So I had a really, really hard time trying to drum up any enthusiasm to start this book. You see, this book is about Melody Ann Croft and she’s a waitress from Morristown, New Jersey and one night she gets this loony guy at her table that starts spouting off about how she should be a model and blah blah blah and then hands her his business card and leaves some phone numbers for her to contact with and to tell them he sent her and they’ll take care of her.

Melody Ann already has a plan though, she’s going to go to college, premed and she’s got a scholarship in the works. Despite having a plan and all, Melody can’t help but give the numbers a shot and the next thing she knows, she’s thrown into the fashion world without a hitch.

This book is pretty fast paced, I just found it pretty farfetched that a regular, normal young waitress’ life would change that drastically practically overnight. I can see some random photographer giving her his card and telling her to call but I don’t see her becoming an overnight success the way that this book painted Mac to be. It was the only thing that seemed pretty out there for me.

Reading this book is like being dumped head first into the fashion world, into modeling. It shows us all of the cutthroat business that goes on between models, the constant dieting to stay waif like and stick thin and it shows us all of the perks of becoming a supermodel and it shows us everything we’ve ever wanted to know about that side of the business, the alcohol, the drugs and all the icky stuff that I don’t care for.

After reading this book, I realized that I’m not a fan of the modeling business/lifestyle. I’m not a fan of the celebrity lifestyle, the one that is drug infested and drowning in alcohol. It’s just not my thing but I didn’t not like Mac the way I couldn’t stand Janey from Trading Up. Mac dealt with the issues that kept cropping up everywhere the same way I would probably handle everything. She made some mistakes but she learned from them and I thought it was admirable.

I liked Mac. I liked the way that she thought and I liked her personality. She wasn’t insanely naive or a total pushover, she was just a normal girl going through some very life changing situations and she was making the best of it the only way she knew how…by wading through the murky waters and hoping for the best.

This book was left with a cliffhanger so I’m pretty sure there will be another book following this one. Am I tempted to read it? A little bit, am I going to read it? Probably. Should you read it? Definitely….but I must warn you, dear readers, this is a chick lit book but it’s a pretty decent chick lit book.

This book is available from Avon. You can buy it here.

4 responses to “Review: This Year’s Model by Carol Alt.”