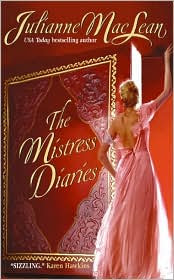 A proper lady would never let herself become his mistress . . .

I was mighty intrigued to read this story after reading the blurb, the very short blurb. It certainly piqued my interest and it took me no time at all to dig right into this book. It was one of those books that you just didn’t want to put down.

We have Lady Cassandra Colchester, who is a widow and wants one wild, reckless night with the mysterious stranger from the ball and as luck would have it, he wants it too so they do the wild monkey dance and he leaves without a backward glance, dashing any hopes she had of a future together. She deals with Vincent’s leaving well enough until she finds out that she’s pregnant and she’s kicked out of her late husband’s family and then disowned by her own family. Now she’s pregnant and all alone and she’s trying to get in touch with Vincent, the father of her baby but he wants nothing to do with her and he just keeps ignoring her.

And she raises their daughter all on her own with the help of her landlady. Cassandra is deeply in love with her young daughter, June Marie Colchester and will do everything in her power to make sure that she is taken care of so when she goes under the impression that she’s about to die, she swallows her pride and she goes to Vincent’s estate with the intention of asking him to take responsibility of their child, since she won’t be able to for very long.

Vincent is thrown for a loop when she shows up on his doorstep with a baby, claiming that the baby is his.

He’s never forgotten their night together, he’s had plenty of one nighters but the night with Cassandra was burned into his memory which scared the hell out of him because he knew that if he stayed with her, he’d make another ass of himself and fall in love with her or something equally stupid. Love has already claimed him once and made an utter fool of him, he will not be that dumb again.

But seeing Cassandra again makes him do all kinds of crazy things like draw up a contract binding her to him, taking responsibility for her and their young daughter. He finds himself drawn to Cassandra and smitten with his daughter. And as he gets to know his daughter, he gets to know her mother as well and he really likes what he sees and talks to and all that other junk.

Vincent was a straight ass throughout most of this book, not in a bad or annoying way, just a straight ass. It was like a defense mechanism he used to keep others at bay. If he keeps others at bay, they can’t get close enough to him to hurt him the way that Mary Ann and his brother did all those many years ago. Watching him slowly fall for Cassandra was great though. It didn’t happen over night, it wasn’t rushed, it just happened at a good pace and it was totally believable and I really enjoyed them together.

Cassandra was no fool, she learned her lesson and she wasn’t going to let Vincent get away with the way he treated her before. She voiced her displeasure with him at every opportunity and she steeled herself against his charms as best as she could and it worked for a bit until they became friends and her reserve where he was concerned fell to the wayside.

These two were a great couple. I really enjoyed reading about their journey to true love but I had issues with Vincent not making Cassandra his wife and instead making her his mistress and I really had trouble with Cassandra allowing herself to become his mistress. It pissed me off that he would ask her to be his mistress, knowing about her last marriage and everything. It didn’t sit right with me and that effected my grade for this book because even after I finished the book, I couldn’t get over that, but aside from that, this was a really fast book to wile away the hours of the night. It was an enjoyable book and I’m glad I read it. I wasn’t too disappointed in the book as a whole, so I would totally recommend it to you readers out there who wants to read a good, solid historical read. I’d like to see how others liked this book, it was a good read, seriously.

7 responses to “Review: The Mistress Diaries by Julianne MacLean.”