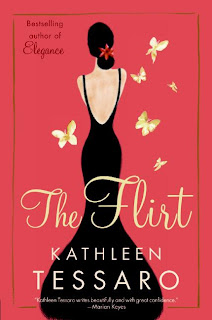 Tantalizing words written on an ivory card. It is the first clue that will lead an intrigued and intriguing London lady on an odyssey of sensual experience designed to awaken her romantic nature.

Out-of-work actor Hughie Venables-Smythe has found a profitable new outlet for his talents. He is hired, often by distraught husbands, to flirt with wives who are feeling neglected in their relationships. His current seductive campaign is focused on Olivia, the spouse of a narcissistic billionaire, and the lady is responding quite nicely to the cream-colored missives he secretly leaves for her. So nicely, in fact, that Hughie decides to employ a similar technique—and shockingly similar messages—in his pursuit of his own heart’s desire: the aloof and charming lingerie designer, Leticia. But the canny, professional flirt’s brazen anonymous intrusions into the lives of two women are about to set in motion a series of remarkable events that no one could have anticipated—setting the stage for shocking revelations about love, friendship, and domestic bliss.

This book had a cute cover and a pretty good blurb so I was interested in reading it. After having read it though, I can’t honestly say if I liked it or not. It’s a good storyline, something that I thought I’d enjoy but I found that as I was reading this, I missed the romance of ONE couple. This story follows a bunch of people who’s lives intermingle with each other. They’re all connected into this big story and it wasn’t that bad of a story but because there was so many characters in this story, I found it hard to connect with all of them and instead only conntected with one of them.

The one character that I really connected with was Rose but we didn’t see as much as I wanted to see from her. I wanted more with her, I wanted to know more about her, I wanted to get to know her son Rory a lot more and I wanted just more of her storyline. I enjoyed her personality and I guess because I’m a single mother myself, I wanted to see how she lived and how she worked and loved and all of that. I wanted her with Hughie right from the very beginning and the long sluggish read toward the end just wasn’t enough for me. I wanted THEIR story. But I never got it and I guess that’s why romance will always be my number one genre to read because I love me a good happy ending and though in this case, I kinda sorta got it…I want more than a kinda sorta, put it together yourself kind of happy ending.

I want to see why these two are perfect for each other even though I knew it. I knew they were perfect because the way they met was too cute. The crush we see Rose having on Hughie was what good romance is about.

Seeing them get their happily ever after. In this story, lots and lots of things happen and Rose’s storyline kind of gets lost in the shuffle. That bummed me out because I didn’t like Leticia. She was too cold, too hard for me to relate to and I just didn’t care for her character. I felt bad for her when we find out why she is the way she is but by that time, I was already set against her. Not any fault of the author, really, it’s just I found it too hard to like her. I liked Sam and thought that he was better suited for Leticia then Hughie was but I didn’t care too much for Sam anyway since I was more engrossed in Hughie.

And then there was Hughie, the main guy of the whole book. He was great, if you like the hottie who’s too broke to buy his own meals and STILL eats out every week. No money for food? EAT AT HOME but that’s not the way Hughie rolls. His good looks pretty much get him everything and everywhere. I enjoyed his character but was frustrated to hell and back because he was going after the wrong girl, spent all this energy going for a girl that was just so wrong for him.

The whole his Dad thing and his Mom thing was totally weird because it wasn’t natural, it didn’t really ring true for me. You spent all this time with this guy and then think, oh wow…it would be cool if they were related and then BAM! They are! It made me roll my eyes more than it made me smile.

All in all, this book was just an okay read for me. I’m having a hard time recommending it to you guys but since most of you guys hardly read chick lit then I guess it’s not a big deal anyway. But still, I read this book and after the slow pick up, the story just wasn’t that entertaining to me. I read on because I wanted to know what happened between Rose and Hughie and was sorely disappointed, mostly because it was more breezed over then anything else. I’m thinking that this isn’t the author’s fault but my own fault because I was reading this book, wishing that it was a romance and it wasn’t.

So, *sigh* I don’t think this book is going to get a second read anytime soon but I’ve certainly read worse books than this.