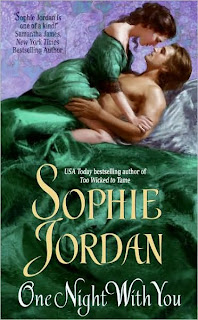 Anything can happen after dark . . .

Tired of being treated like a servant by her own family, Lady Jane Guthrie finally has a chance to escape . . . at least for one night. Attired in a daring gown, she arrives at a scandalous courtesans’ masquerade ball looking forward to her few hours of freedom. But when she sees Seth Rutledge, her skin begins to tingle with anticipation. Many years ago, Seth broke her heart by falling for her beautiful, title-hungry sister. But now here he is, right in front of her, offering her his lips . . .

Embittered by war, Seth returns home to inherit the title that would have once won him the woman of his dreams. Though duty demands he wed, he’s convinced passion no longer has a place in his life . . . until a masked siren sets his heart aflame. Desperate to find her again, he has no idea it’s his childhood friend Jane—and that after one night together their lives will never be the same.

Jane has been widowed a year. She’s ready to move on with her life. Her late husband’s brother and wife aren’t ready for to come out of mourning though. They’ve made her their own personal little slave.

One night, she sneaks out to attend a masquerade with her friends. It is there she sees the boy she once loved, Seth. But Seth is not the same boy she once knew and loved. Life, war and Jane’s sister has made him a bitter man. He see’s the masked Jane and because infatuated with her. The happen to meet in a room, (Jane is trying to escape from her brother in law, Desmond. He doesn’t realize it’s her and if he does, Jane will be in trouble) and Seth names her Aurora. Jane does nothing to correct him.

She later runs into Seth and his sister Julianne at the park. Julianne is excited to see Jane again ands asks her over to tea. Jane accepts but she has to sneak out. Because she’s kind of hesitant Seth sees it as something against his sister. Julianne is blind. Something he feels responsible and blames himself for.

Julianne explains Seth is looking for a bride. The only bride who will do is someone who likes Julianne. Should anything happen to him, he wants to know his wife will look after Julianne. When he was presumed dead, their cousin tried to have Julianne locked up in asylum. Seth doesn’t want that happening her again.

Jane learns that Seth is going to Vauxhall to look for a bride. She decides to attend as Aurora and have one night with Seth. And boy does she have that one night with Seth. She ends up preggers. She tells Seth about the baby therefore revealing herself and Seth is upset. He accuses her of planning the thing. No, she says. I mean, she did plan to be with him but not to end up pregnant. She believed herself barren.

Seth claims they will marry. However, their is a marriage of convince. He tells her he expect nothing from their marriage. Jane realizes she’s stuck in another loveless marriage after she seeks his company one night. Of course, Seth being man becomes frustrated and changes the rules on her. She will share his bed.

For the most part I did enjoy the book until the end. It just happened to fast and it didn’t satisfy me. Seth was a major butthead to Jane. Jane is finally sick of his treatment and leaves. He catches up with her, says he’s sorry and that he loves her. that’s it. Nothing else. She goes home with him. I’m sorry, i need more than that. I want the grand gesture. I want Jane to make Seth squirm. But it didn’t happen.

5 responses to “One Night With You by Sophie Jordan”