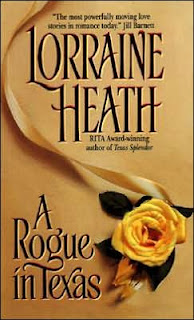 Isabel’s review of A Rogue in Texas (Rogues in Texas #1) by Lorraine Heath.

When Grayson Rhodes leaves London’s beau monde, he sets out to seek his fortune. Sure, he’s the illegitimate son of a duke, but he needs to move on and make his way in the world. But did he expect to end up working Texas farmland for the widow Abbie Westland? She’s nothing like the ladies from the society balls, and she has more mystery to her than any barefoot contessa. For her part, Abbie’s convinced that this British dude is just a slacker circa the mid-1860s. Lorraine Heath rides the range with A Rogue in Texas , a delightful read from beginning to end.

Grayson is a bastard. Because he is a bastard, he will not inherit his father’s estate. So Gray and his friends, Kit and Harry (second sons), go to Texas to make their way in the world. Actually, their fathers send them there. Because they know as second sons, they won’t really have anything in England and this is a good opportunity for them. That or they just want their sons to grow up and become men. The boys agree to travel to England. What they don’t know is all the hard work they’ll have to do. Their job: picking cotton.

Gray and Abbie find themselves falling in love with each other. However something from the past comes back and threatens their future.

Yes, I enjoyed reading this book. My SIL had loaned me a few books by Lorraine Heath and they were all right. Someone, can’t remember who, told me the westerns were much better. They were right. Much better.

I liked Gray because although he wanted Abbie so much, he let her call all the shots. He let her grow to trust him. He was also hardworking. His friends wanted to turn around and leave, but Gray was determined to do what he was set out to do. I liked how he kept wanting Abbie to relax. He would watch her making sure everyone else was taken care of, but never took care of herself.

I liked Abbie. She was a hard working woman. She doesn’t take to Gray at all, thinking he won’t be able to pull his weight. She was also in a way devoted to her deceased husband. She didn’t love him but she did care for him. She knew he had his faults but would always tell Gray, “He gave me a roof over my head and food in my belly.” She accepted the land came first with her ex hubby. By being with Gray, she learned what is was like to be wanted and loved.

Abbie is kind of.. skittish about men touching her. There is a scene where Gray falls in the mud. He pulls Abbie down with him, thinking it would be funny since she was laughing at him. She gets all freaked out. There is another scene where her brother comes up from no where and Abbie gets startled. The way she acts, you would think her hubby was rough with her or even raped her.

He didn’t per say. He would just tell Abbie, “I need you” and that was it. I would say her ex hubby was just dumb when it came to a woman’s needs. Now I can see where that would make Abbie not like sex but not to be fearful of a man’s touch.

My question: Did I miss something? Was she beaten or raped? Was it so subtle that I missed it? Or is just a matter of that was how Abbie dealt with that situation?

I kind of predicted some things. Like, when Abby and Gray got engaged, I knew something would come up to bring chaos to that. And then I figured how that mess would be tidied up. I’m not one to figure these things out either.

Conclusion: I did enjoy reading this book. A few things bothered me but it wasn’t anything major. I look forward to reading the other books in this series.

7 responses to “Review: A Rogue in Texas by Lorraine Heath”