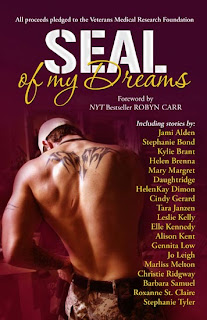 My Google Reader sure has been good to me today because I came across this scrumptious looking cover thanks to HelenKay Dimon who posted about it on her blog. What an awesome way to give back to the people who serve this country to keep us safe. I know that I will definitely be buying a copy for myself and maybe some copies to giveaway here on the blog as well.

All proceeds from the sale of this book will go toward the Veterans Medical Research Foundation so really, do the soldiers a good and get yourself a copy, won’t you?

The book comes out on November 11, 2011 so you have a bit of a waiting period but with the list of amazing authors that took part in putting this book together, I’m sure you won’t be sorry. For the price of one book, you’ll be getting stories from the likes of:

For more information, check out SEAL of My Dreams: A Charity Anthology. Sexy SEALs for heroes and a whole lot of great writers in one book? I’m in….are you?

It’s going to be a great release month for August and here’s just a few of the books that I’m looking forward to.

1. Burning Up by Susan Andersen.

Though it’s been years since the infamous Macy O’James stepped foot in Sugarville, Washington, everyone remembers what she supposedly did. The tiny town is still buzzing about her crime and lack of punishment.

Now back to lend her family a hand, Macy vows to hold her head high—especially at her high school reunion. But forget about the hottest man in Sugarville escorting her. Though she and fire chief Gabriel Donovan generate enough sparks to burn down the town, he’s a law-abiding, line-toeing straight arrow. So not her type.

But maybe—just maybe—he can change her mind about that.

I’ve been curious about Burning Up for a while now because I still haven’t read a Susan Andersen yet but I’m thinking I’m going to make this book my first. I hope it’s a good one. I LOVE the cover.

2. Love Me if You Dare by Carly Phillips.

When hostage negotiator Rafe Mancuso takes a bullet to save Sara Rios, his former partner, his actions make him a bona fide hero—and New York City’s newest most eligible bachelor. Then Rafe admits that Sara is much more than just another woman he’s rescued. Suddenly, a firestorm of gossip turns him into exactly what he doesn’t want to be: the Bachelor Blog’s newest hot topic. His only solution is to leave town and get himself out of the spotlight…and sexy, jaded Sara out of his mind.

NYPD officer Sara Rios has Rafe to thank for saving her life, and Rafe to blame for the media chaos surrounding her. She wants to throw herself back into duty at full throttle, but until her injuries heal, she’s on leave and in search of her rescuer. From the moment she finds Rafe and meets his large, boisterous family, she’s hooked. But mutual attraction doesn’t always mean happily-ever-after, and these two have a long way to go to find their fairy-tale ending….

I enjoyed the first book in this series and can’t wait to own a copy of this one as well. Rafe sounds like a total dream boat and I enjoyed getting to know Sam in the first book. If you remember, Sam is Coop’s best friend and she gets her story told in this book so be on the look out for it.

Pia was your typical popular girl in high school – she made friends easily, cheered on the squad, and had her share of dates with the school jocks. But she’s always had a hard time committing to something, or someone. So when her best friend Crystal succumbs to cancer, Pia is devastated, but also shocked by the inheritance her friend has left her – her frozen embryos! Pia’s in a quandary. It’s not like she can just throw them away. But is she really capable of being responsible for another human being? For once, Pia throws caution to the wind and decides to embrace Crystal’s legacy. But as she struggles with her decision, another complication arises that Pia is totally unprepared for. She finally meets the man of her dreams…and her life becomes more confusing than she ever thought possible.

I really enjoyed the other two books in this series and can’t wait to own a copy of my own for this one. Pia is one of those characters that I’ve come to care about through out the length of this series and I can’t wait for everyone to be able to read her story. Also, Raoul from Sweet Spot is back and he gets his own happy ending, how can you not be excited for that?

4. Wicked Delights of a Bridal Bed by Tracy Anne Warren.

To her surprise, Lady Mallory Byron finds herself walking down the aisle with the last man she ever expected to ask for her hand . . . .

Everyone knows the Byron brothers are “mad, bad and dangerous.” Now their sister shockingly discovers she’s the newest talk of the Ton when she marries the scandalous Earl of Gresham. Faced with a tragic loss, she’d sought comfort from him as a family friend. But soon consolation turned to passion, scandal—and a wedding! In the bridal bed, she finds pleasure beyond her wildest dreams. But can nights of wicked delight change friendship into true love?

Charming rakehell Adam, Earl of Gresham, has secretly loved Mallory for years. He lost her once to another man, but now he has a second chance to win her love—and plans to do so by any means necessary. Will Mallory’s heart give him what he so dearly desires? Or is the past too much to overcome?

5. Maybe this Time by Jennifer Crusie.

Andie Miller is ready to move on in life. She wants to marry her fiance and leave behind everything in her past, especially her ex-husband, North Archer. But when Andie tries to gain closure with him, he asks one final favor of her before they go their separate ways forever. A very distant cousin of his has died and left North as the guardian of two orphans who have driven out three nannies already, and things are getting worse. He needs a very special person to take care of the situation and he knows Andie can handle anything…

When Andie meets the two children she quickly realizes things are much worse than she feared. The place is a mess, the children, Carter and Alice, aren’t your average delinquents, and the creepy old house where they live is being run by the worst housekeeper since Mrs. Danvers. What’s worse, Andie’s fiance thinks this is all a plan by North to get Andie back, and he may be right. Andie’s dreams have been haunted by North since she arrived at the old house. And that’s not the only haunting…

What follows is a hilarious adventure in exorcism, including a self-doubting parapsychologist, an annoyed medium, her Tarot-card reading mother, an avenging ex-mother-in-law, and, of course, her jealous fiance. And just when she thinks things couldn’t get more complicated, North shows up on the doorstep making her wonder if maybe this time things could be different between them.
If Andie can just get rid of all the guests and ghosts, she’s pretty sure she can save the kids, and herself, from the past. But fate might just have another thing in mind…

I’ve already squealed in delight on my book watch for this book but still, I GOTTA HAVE THIS ONE!

There are so many other books coming out but these are the ones that are fresh in my mind right now.

So share with me, which books are you guys most looking forward to in August?

…seen a cover of a book and immediately, you had to read it because you loved it that much? That’s how I feel about this cover: 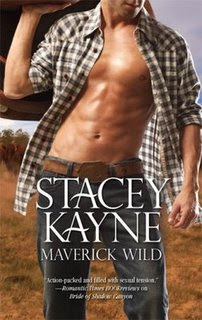 So tell me, or rather, show me the covers that made your mouth water and made you want to rush to the bookstore to get the book just so that you can have that precious cover in your collection.

This book is available from Harlequin. You can pre-order it here.