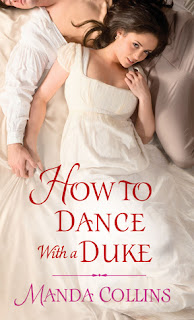 Holly‘s review of How To Dance with a Duke (Ugly Ducklings, Book 1) by Manda Collins

What’s a wallflower to do when she’s suddenly in need of a husband? Use all the pluck and moxie she can muster to get what she wants…

Miss Cecily Hurston would much rather explore the antiquities of Egypt than the uncharted territory of marriage. But the rules of her father’s exclusive academic society forbid her entrance unless she weds one of its members. To clear her ailing father’s name of a scandalous rumor, Cecily needs to gain admission into the Egyptian Club—and is willing to marry any old dullard to do it.

Lucas Dalton, Duke of Winterson, is anything but dull. He’s a dashing and decorated war hero determined to help Cecily—even if that means looking the other way when she claims the dance card of Amelia Snow, this season’s most sought-after beauty. But Lucas has a reason for wanting Cecily to join the Egyptian Club: His brother went missing during one of Lord Hurston’s expeditions to Egypt. An alliance with the explorer’s bluestocking daughter could bring Lucas closer to the truth about what happened…or it could lead him to a more dangerous love than either he or Cecily could have imagined…

This was an ok read. I enjoyed the pace of the story once I got past the first few chapters. Cecily bothered me quite a bit with her “act first, think never” attitude. I understand wanting to have your opinion valued. I even understand wanting to be in control if your own life. I do not, however, understand stupid actions that place you in danger at every turn. Her insistance that she be included in every aspect of the investigation bordered on the ridiculous at times. When she wasn’t insisting that she should could take care of herself, she was pushing Lucas away to save herself heartbreak. Again, I understand self-preservation. But it got old after awhile.

Lucas was definitely the stronger character. He was suffering the loss of his brother and the need to find out what happened to him, but he still did his best to take care of those around him. As the son of a vicar (he was never meant to inherit), his principles were simple and attractive. It isn’t very often that we find a duke who has morals and values. His fascination with Cecily was easy to understand, since she was the only girl in London who wasn’t interested in him because of his title.  I think part of the reason I was so frustrated with Cecily was because I came to care for Lucas very much. I wanted her to value him as much as he valued her.

Aside from the heroine, I enjoyed the story. I liked the premise. That the story didn’t revolved around fully around the ton was a point in its favor. Collins relied a little heavily on certain stereotypes, but as a light read it worked. In the end I believed in Cecily and Lucas as a couple and wanted to see them settle in happily ever after.

I won’t be rereading this anytime soon, but I do plan to read the other books in the series.