In The Seduction of His Wife, USA Today bestselling author Janet Chapman introduced the Knights, an ambitious logging family whose fortunes and hearts are tied to the rugged mountains of Maine. Now, Ethan Knight is drawn into the family business . . . and deep into temptation.

When Ethan agreed to work at a sawmill his family is purchasing, he didn't foresee getting fired on his first day. He should be mad at the fiercely outspoken female foreman, but something about her seems disconcertingly familiar -- even though Ethan is sure he'd remember meeting a stunning beauty like Anna Segee before.

Anna has never forgotten Ethan -- or the schoolgirl crush she had on him before her father whisked her off to Canada. Now the shy, gangly girl is grown up and back in Oak Grove with a new name, new confidence, and a newly inherited mill of her own. Her superb reputation in a male-dominated industry hasn't come easy, but even harder will be ignoring the sexy man Ethan has become. . . .

So Anna Segee comes back to Oak Grove after many years away getting to know her long lost father and facing the life that she walked away from. The life her Grandfather, Samuel Fox left behind in his car accident.

Fox Run Mills is her inheritance, the one thing that her Grandfather left behind for her. Against her Father’s wishes, Anna returns to Oak Grove to make a life of her own, one that didn’t involve her over protective Father and pesky brothers making every decision for her, fixing every little aspect of her life for her. She came back to make a name for herself and live on her own two feet.

It should have been easy but Ethan Knight, her long ago Knight in Shining Armor keeps putting a cramp in her style. You see, he’s living in a spare cabin on her land and she’s his landlord. But the cabin isn’t up and running to his liking so he’s taking it out on her, which means he’s sleeping in her bed and she’s sleeping on the couch because she was in a car accident that Ethan saved her from. He drives her home, sets her up on the couch and he, himself shacks up for the next couple of nights while she’s recuperating from her ordeal, sleeping in her bed. He takes care of her and becomes the kind of man that she ran away from. The kind that boss her around, makes decisions for her, tells her what’s good for her and she hates it…

…almost as much as she kinda likes it.

When these two get into it, they really get into it. It was funny to see them yelling at eachother and arguing just because they love to be going at each other. They had fun razzing eacho ther and I enjoyed reading all about their little squirms.

At the beginning of this book I wanted more Ethan. I wanted to see what happened to him in the past (which was talked about in The Seduction of His Wife) that made him the way he is today. I wanted to know why he was so cynical where women were concerned. I wanted all the mysteries of TSoHW brought to light and I wanted to love Ethan more than Alex…why? Because even in Alex’s book, I knew I was going to love Ethan more. He was more mysterious, held my attention more than Alex did and I loved me some Alex.

Janet Chapman didn’t disappoint me at all because I DID love Ethan more than Alex.

Anna Segee was a capable heroine, it was great to see her making a life for herself apart from the family that babied her from the time she was brought into their family. She did well enough with the rebuilding of her Grandfather’s Legacy and I loved her friendship with Jane. I loved seeing her make Ethan jealous with the men at the dance, I loved it all the more because Ethan wasn’t all that jealous, he was so sure that she’d be going home with HIM that night and well, after all that, it was just so great. I love Ethan’s Knight in Shining Armor complex. It suits him well.

It was so good to see Ethan’s family in the book and meeting and seeing Anna’s family was a great addition to the book and i was super happy with the entire book.

I know that Nicole liked Alex’s book better than this book (only slightly but still) but I didn’t. I loved Ethan and Anna’s story better than Alex and Sarah’s. It might be because I have forgotten a lot of A&S’s story and E&A’s story is fresh in my mind, but I liked the depth of this story, the flow of this story and the overall presentation of this book.

It was a good read and I’m so glad that I finally picked it up. For those of you that read and loved Alex’s book, I would totally recommend this book for you to read as well. 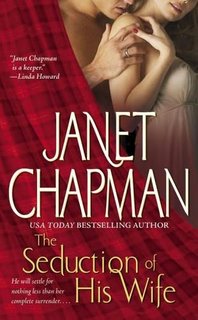 Rowena’s review of The Seduction of His Wife (The Knight Brothers #1) by Janet Chapman.

He set out to seduce her for all the wrong reasons — but found himself falling in love with her for all the right ones.
Alex Knight is dead — or so everyone thinks. A widowed logger baron with a risk-taking streak, he took on a South American engineering project and was reported dead after a rebel attack. So when he turns up back in Maine very much alive, his grieving family is shocked. But the biggest shock is Alex’s, when he discovers he’s now married — to a woman he’s never met.

Sarah Banks is ready for a change from running a quiet Bed & Breakfast, and working for the Knight family offers not only a bigger opportunity, but also the family life she yearns for. So she’s glad to help secure custody of Alex’s orphaned children, whom she’s come to love, by marrying their father by proxy before he’s legally declared dead. But when Alex returns, the sexy, determined woodsman upends all of Sarah’s plans. Because suddenly she’s married to a passionate stranger with an easy smile…and tumbling headlong into a fiery dance of seduction.

This book had me all warm and fuzzy all over. I didn’t want to finish reading it but couldn’t help myself, I just zipped through this book like my life depended on how fast I can read it. I absolutely loved this book and loved the characters. I loved the setting, the storyline and I loved the Knight family.

Alex was a fanastic hero. And the way he was trying to be the best hero for Sarah totally won me over because you don’t meet many guys who will willingly read a romance novel and then try to seduce his wife with the things he learned in the book.

It was so cute.

I loved Sarah, I thought she was a great heroine and she was perfect for Alex, but not just Alex. She was perfect for little Tucker and Delaney. She needed them just as much as they needed her. She loved the Knight family with all that she had and she took good care of them. It was fabulous to read about the love she had for them and the love that was returned unto her.

I loved Grady and his manipulative ways. I loved the fierce devotion he had for his sons and grandkids and I love how his heart was still big enough to love his new daughter in law, Sarah. I won’t tell you guys how the storyline is, since Jazz already took care of that, but I really did like this book and I know you guys will too. Delaney was great, the whole fishing scene was too cute and I’m so glad that Delaney stuck with her “Mom”…it was so great and then Tucker’s determination to see his Dad’s marriage to his Mom as right and real, just stole a little piece of my heart. Gosh this was good.

I loved the Knight brothers. Alex, Ethan and Paul were fabulous characters. I loved the togetherness that they had between them. They were brothers, they were friends and they respected each other and they reminded me of the Quinn brothers from Nora Roberts but they stood apart on their own. Solid heroes, solid men and I ate their page time up.

Overall, this book was a book that I enjoyed a great deal even though it’s not the most popular of books. I haven’t heard too many people who enjoyed this book but I don’t care, I love it enough for the entire world. It was the bomb!

This book is available from Pocket. You can buy it here or here in e-format.