All of London is abuzz with the return of the utterly alluring, recently widowed Diane Benchley. Will she remarry? What will she do with her late husband’s fortune? Society is shocked by her announcement—at the Grand Ball, of all places!—that she plans to open an exclusive gentleman’s gaming club in the family mansion. But no one is more stunned than the Marquis of Haybury, Oliver Warren.

Years ago, Oliver and Diane shared a private indiscretion. Now Diane threatens to reveal Oliver’s most ungentlemanly secrets…unless he agrees to help her. A notorious gambler—and rake—Oliver is overqualified to educate Diane in the ways and means of running her establishment. But striking a deal with Diane might just be the biggest risk Oliver has ever taken. This time, the only thing he has to lose is his heart…

Diane Benchley wants to get back what she feels was taken from her and that was a decent life with a husband who wasn’t a complete ass. Her husband died but left her penniless and in a ton of debt because of his gambling. Diane took up with Oliver very quickly thereafter but he up and ran out on her without a word. Now Diane is back in London and looking to start a Gentleman’s Club that is run strictly by women. Her backer falls dead but she has something on Oliver and blackmails him into helping her with the money she needs.

Oliver isn’t sure what he thinks about this “new” Diane. She knows her mind and isn’t going to put up with anything from Oliver – including suggestions about the club. In fact she hates him. He can understand why but when he realizes that she holds his heart he’s determined to do anything he can to get the woman he loves to see him as a man and not just a bank.

Diane has her hands full getting the club running and keeping her former brother-in-law from taking her to court to prove that the house that the gentleman’s club is in is actually legally his and not hers.

This was a pretty interesting book but I had a couple of issues with it. While I really liked the thought of Diane starting the club I really didn’t get to know Diane all that well. We definitely got more thoughts from Oliver than Diane. Also, because so much of the book was focused on getting the club up and running I thought that the romance suffered for it.

Like I said, the setting up of the gentleman’s club was quite well done. With Diane’s former b-i-l making waves the plot to get him to stop was pretty clever and I very much enjoyed watching that unfold.

So while I thought the book was very good it was pretty light on the romance, imho. I did read the excerpt from the next book and it sounds quite good as well – can’t wait to read it. 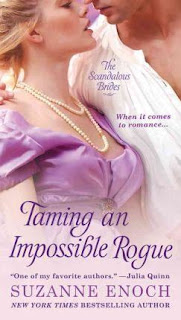 One year ago, Lady Camille Pryce left her haughty fiancé at the altar—for good reason. Not only was the marriage arranged before she could even walk, her betrothed was too smug to exert himself to meet her! Now, disowned, with no husband or family to support her, she’s left with one option: go to work in the notorious Tantalus Club…

A gentleman’s gaming house run by a woman, the Tantalus is no place for a proper lady; so, to save face, her jilted fiancé must retrieve her. But banned from the club, he’s forced to employ his ne’er-do-well cousin instead. A handsome, experienced rogue, Keating Blackwood is the perfect man to lure Camille away. But the moment they meet, Keating instead wants to save her…for himself. Impossible? Perhaps. But if Camille can make the ultimate player lay his cards on the table—and risk his heart—all bets are off…

For most of the past year Camille Pryce has worked at the Tantalus Club in London. The club is owned and operated by a woman and all women work there in all capacities. Camille is a hostess in one of the dining rooms and she likes her job. She’s extremely happy to have a roof over her head and feel like she’s doing something other than suffering through. You see she was engaged to a man when she was three days old (the “man” was only 7 years old) and she’d always known that she was to marry Lord Fenton. She was a romantic and longed during her growing up years to be contacted by Lord Fenton but her wedding day arrived and the man hadn’t even spoken to her. She decided when she was about to walk down the aisle that spending her life with a man that couldn’t be bothered to contact her in 21 years wasn’t something she wanted.

Lord Fenton contacts his cousin, Keating Blackwood, to do him the favor of getting his fiancé back to the altar. Fenton will pay Keating 10,000 pounds to do it. Keating truly doesn’t want to complete the task but he needs the money desperately. Keating is a complete scandal in his own right. Six years earlier he had had an affair with a married woman and the husband had come looking to kill Keating. Keating had killed the man in self-defense but he had left London to become a gentleman farmer. He had become a completely different person than he once was but he was still one of the biggest scandals around. This was actually a bonus in gaining entry into the Tantalus Club and seeking out Camille in order to convince her to marry Fenton.

Camille and Keating become friends and eventually fall in love. Keating doesn’t want Camille to marry Fenton and Camille doesn’t want to, but they each have their own reasons for ignoring their feelings and following through with the marriage.

I have to say I’ve become such a fan of Suzanne Enoch’s. Something about her sense of romance and friendship speaks to me every time I read one of her books and I love that.

This story was different in that Keating wasn’t a Duke or an Earl and he certainly wasn’t rich. He was struggling to survive and try to make amends for the wrongs that he had done. His guilt ate at him on a regular basis and this made him think that he didn’t deserve anything more than he had. It sounds kind of like a defeatist attitude but guilt can do strange things to a body. Despite all he’d done I really liked the man. He was thoughtful and attentive to Camille as well as her friends and I liked that about him. Yes, he was trying to get Camille to marry Fenton so he did have an ulterior motive but he certainly didn’t have to be kind to her friend.

Camille was young. She was an idealist and a romantic. Frankly she hadn’t seen enough of life to make great decisions but I just couldn’t fault her for wanting more out of a marriage and running on the day of her wedding. Should she have spoken up before the actual day before she decided that it wasn’t something she wanted? Sure, but after meeting her parents (who had basically disowned her) later in the book I could see how she wouldn’t be able to stand up for herself before. She had made some bad decisions but had definitely paid for her actions in a way she never expected. I had to admire her for standing up for what she believed in.

I loved the pair together and very much admired the two of them willing to do things they didn’t want to do for love. Would I have done the same? Probably not but it was incredibly romantic to read about it. The story is a good, emotional read. Book one in the series was great and I can’t wait to read the next story in this series.