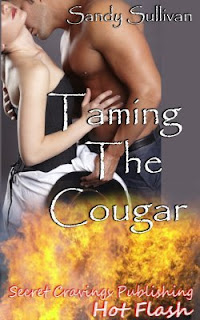 Judith’s review of Taming the Cougar by Sandy Sullivan.


After her ex left her for a much younger woman, she decide’s she is done with the opposite sex. Her B.O.B can take care of her needs just fine thank you very much. Until the day she runs into Chris Nelson, hot cowboy extraordinaire at the local honky-tonk during her daughter’s bachelorette party. Feeling a little tipsy or a whole lot drunk, Marla’s tongue gets away from her to the point she tells Chris the torrid details of her marriage breakup only to be embarrassed enough to run.

Chris Nelson needs a quick fuck and the gorgeous cougar sitting in the bar booth is the ticket. Getting her alone seemed like a good idea to the point the quick ride in the front seat of his truck, blows his mind. When Marla passes out, he feels obligated to take care of her until she’s sober enough to drive herself home.

Little do either of them know, their paths will cross again in the most unlikely place. Can Marla put aside her distrust of men, especially for a younger man? Can Chris convince her he’s not like other guys and does he even want to?
I hadn’t read any of Sandy Sullivan’s work until I found a series of novels set in the West and Northwest and found that I liked her style and the way she put a story together. So when I was sent this story I was delighted to read and review it. Obviously the mother of the bride is in her early to mid-40’s and the last thing she feels is over-the-hill. Just because her ex is crazy and has now married a young nubile thing and gotten her pregnant doesn’t indicate that she is ready to dry up and blow away. He may try to make her feel that way, but Marla isn’t going to lie to herself just because he’s a jerk. Even her daughter wonders how her mother put up with her father for 20 years. Yet, there’s no getting around the fact that she has been badly hurt and has now come to the conclusion that a long-term relationship with her Battery Operated Boyfriend is lots less wear and tear on her heart. Men just aren’t worth it! Meeting up with a sexy cowboy may be exciting for the evening, but he’s just that: one evening’s excitement.

Now it must be noted that not every single older woman is toting around a broken heart or a charred set of emotions. But our heroine certainly has had her share of crap shoveled at her, and now she is just trying to figure out what he future is going to be–a future she never dreamed would be such a lonely one as it is now. How strange that a tall and gorgeous cowboy was holding her and comforting her as the pain of rejection finally came to the surface. Did she want her ex back? No way!! But the reality of being set aside by someone who had promised to love and be with her still hurt and hurt deep.

This story chronicles a journey of re-discovery of the power of friendship that knows no boundaries of age, the power of love to heal and restore, and the grace that can fill a relationship when two people are willing the accept one another for who they are. This story also tells of a man who makes some interesting discoveries about himself and one whose innate goodness supports his efforts to bring joy to this sad woman who has sort of crashed into his life. He was the kind of man to whom women were attracted, but he was intrigued by the fact that this was the first woman in a long time who held his interest even when she wasn’t trying to.

“Marla needed someone who would stand beside her, strengthen her with his love and trust not to hurt her. Could I be that man? Do I even want to?”

It is story full of love and friendship, of learning new ways to relate that may be outside what society views as “normal,” a series of experiences that opened up a future that was totally unforeseen by both Marla and Christ. And it bears the unique stamp of a writer who crafts a story so well, who draws the lines of her characters with a sure hand, and one for whom the story is the thing. It is heart-warming and enjoyable on many levels and while it engages the mind, it also satisfies that emotional need that romance lovers bring to the books they love. This is truly a terrific book and one I will continue to re-read in the future.

This book is available from Secret Cravings Publishing. You can buy it here or here in e-format.