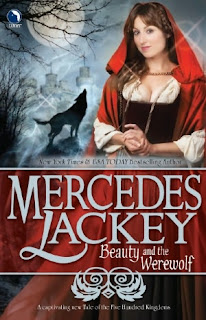 The eldest daughter is often doomed in fairy tales. But Bella— Isabella Beauchamps, daughter of a wealthy merchant—vows to escape the usual pitfalls.

Anxious to avoid the Traditional path, Bella dons a red cloak and ventures into the forbidden forest to consult with “Granny,” the local wisewoman.

But on the way home she’s attacked by a wolf—who turns out to be a cursed nobleman! Secluded in his castle, Bella is torn between her family and this strange man who creates marvelous inventions and makes her laugh—when he isn’t howling at the moon.

Breaking spells is never easy. But a determined beauty, a wizard (after all, he’s only an occasional werewolf) and a little godmotherly interference might just be able to bring about a happy ending.…

When I requested Beauty and the Werewolf from the library, I didn’t realize it was part six in the on-going Five Hundred Kingdoms series. I hate to read series out of order, and if I had known this, I probably wouldn’t have requested it. However, it was an impulse request, since I had was really intrigued by the fresh interpretation of the fairy tale characters and storylines. (For example, I love how “Granny” is more of a title for wisewoman, than a grandmother. The same goes for “Fairy Godmother”—very cool take on my expectations from the fairy tales.) I’m glad I did break my usual rule, and read Beauty and the Werewolf, even though it was out of order.

The story itself was well told enough that I never felt like I was missing any important information covered in the previous books, and the background to the Five Hundred Kingdoms was delivered in a natural way that blended seamlessly with the plot.

Bella is a very capable and independent heroine. Her self-absorbed, hypochondriac step-mother, and her light-hearted and benignly superficial step-sisters have no idea that Bella manages them and the household to the extent that she does. She feels that she has her life under control. Then, she is bitten by a wolf while retuning from a visit with the local Granny, who lives in the woods.

Suddenly, she is very much not in control, swept away to Duke Sebastian’s remote castle, and told that she must stay there for the next three months, so it can be determined if she, too, is now a werewolf. To add insult to injury, she also learns that the bookish, unassuming Duke is also the werewolf that bit her.

There were many things I really enjoyed about Beauty and the Werewolf.

I found the concept of Tradition that underpins the series really interesting. This idea is that the people who live in the Five Hundred Kingdoms tend to fall into types: the “Stepmother,” the “Woodsman,” etc., and the Tradition is a force that nudges people to act consistent with their fairytale storylines, often to the detriment of the individual person, since many of these tales end tragically. I thought it added a really original element to character motivations, since those who are aware of the Tradition must fight against it (or at least consciously decide if their decisions are their own) if they want to be truly happy.

There were some really unique characters in Beauty and the Werewolf, especially the servants, who were all magically enchanted and invisible. Yet, they still had distinct personalities, and Bella came up with ingenious ways to interact with them.

Character growth is really important to me in a story, and Bella grows and learns new things about herself though out the book. She sometimes comes off as a bit of a Mary Sue, so self-possessed, and able to do everything perfectly that she tries out. However, there are also some lessons she learns about the downfalls of always thinking she knows what is best—for herself, and for those around her. It was these learning moments that humanized her for me, and made her a likable character.

Unfortunately, it was in the romance, where the story fell short for me. I never really felt the chemistry between her and the hero. For the first two-thirds of the book, he isn’t in enough of the story, in my opinion. Also, compared to Bella’s strong and vibrant personality, and compared to other characters, who are more much more interesting, he sort of fades into the background. Also, when he declares himself to Bella, there just wasn’t enough chemistry between them for me to feel truly invested in their relationship.

However, overall, I really enjoyed Beauty and the Werewolf, and will probably go back and track down the first five installments of the Five Hundred Kingdoms. I’m especially interested in learning Godmother Elena’s story, which is told in the first book of the series, The Fairy Godmother.

This book is available from Luna. You can buy it here or here in e-format. 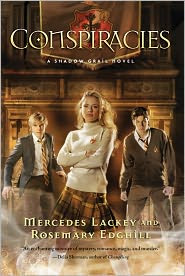 Spirit and her friends Burke, Loch, Muirin, and Addie have managed to defeat the evil force that has been killing students at Oakhurst Academy for the past forty years—or so they think. When a series of magical attacks disrupts the school, Doctor Ambrosius calls upon alumnus Mark Rider to secure the campus—and start training the students for war. The only student without magic, Spirit doesn’t trust Mark or his methods. She knows that Oakhurst isn’t safe. And if Spirit and her friends want to live long enough to graduate, they have to find out what is really going on—before it’s too late.

I got about almost half way through the book before I finally put the book down for good. I finished the first book and thought that it was just okay and thought the second book would be better but I couldn’t even finish this book.

In this book, all of the woe is me crap going on with Spirit got to be a bit much for me. I mean, she hates her school, she hates her life and she hates everything and I get it. She misses her family and she misses her old life but it was hard for me to keep sympathizing with her when all she did was hate everything. I’m not saying that the entire time that I was reading this, Spirit was depressed as all get out and moaning and groaning over everything but for a fair amount of the book, she is.

You can tell that something big is on the horizon with this book and it sounded interesting but try as I might, I couldn’t get into this book. I was already on thin ice with the first book, which I didn’t enjoy nearly as much as I had hoped. Going into this book, I forced myself to get past the few couple of chapters and then right before half way through, I gave up completely. Nothing about the characters or what’s happening in the story grabbed me and made me want to continue reading this book so I finally just threw in the towel.

Don’t you hate when that happens? 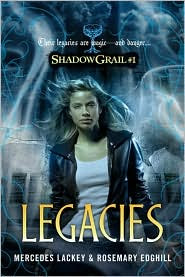 In the wake of the accident that killed her family, Spirit White is spirited away to Oakhurst Academy, a combination school and orphanage in the middle of Montana. There she learns she is a legacy—not only to the school, which her parents also attended, but to magic.

All the students at Oakhurst have magical powers, and although Spirit’s hasn’t manifested itself yet, the administrators insist she has one. Spirit isn’t sure she cares. Devastated by the loss of her family, she finds comfort with a group of friends: Burke Hallows, Lachlann Spears, Muirin Shae, and Adelaide Lake.

But something strange is going on at Oakhurst. Students start disappearing under mysterious circumstances, and the school seems to be trying to cover it up. Spirit and her friends must find out what’s happening—before one of them becomes the next victim…

This story starts off with Spirit White losing her entire family in a car accident and her finding out that her parents set her up at Oakhurst Academy should anything happen to her. The book follows Spirit as she finds out the truth about who she is, what she is and starts getting used to her new life at Oakhurst. She’s met new friends, she’s starting classes and things are as normal as she can stomach when a student disappears.

This book was a bit slow to begin but once the story took off, it did a pretty decent job of keeping me invested in the story. The characters were all good but they didn’t really stand out for me. There isn’t one character in this story that I thought was a really bang up character. They were all good but they weren’t necessarily great or memorable for that matter. I liked them well enough but once I said good bye to them, I was okay with it.

I finished this book with a I’m curious to see what happens attitude then an OMG what’s going to happen next attitude and that’s when I knew that while this book was good, it wasn’t great. The characters were more two dimensional and that was a bummer because for me, if a story has fantastic characters then the story will really take off but that wasn’t the case with this book. I enjoyed Spirit and I enjoyed Loch and Burke but outside of them, I’m afraid I won’t remember much about anyone else in the book.

So while I enjoyed getting to know Spirit and her friends (well Loch and Burke), the mystery surrounding Oakhurst and what’s going on there was a bit of a let down but I’m curious enough about what’s to come for the folks at Oakhurst in the next book so I’ll be reading it, I’m sure.