Ransom Falconer, Duke of Damerell, is sent to see if Merlin Lambourne, the famous inventor, has created a truly magnificent innovation that can be used in the war against Napoleon. What Ransom doesn't realize is that Merlin is a woman, and not everyone wants to see her invention become a reality...

With dreams of flight...

Merlin Lambourne is a brilliant yet slightly eccentric scientist whose dream is to build a flying machine. Nothing can distract her from her goals, and Ransom offers her refuge at his estate-a safe haven to work on her invention undisturbed. But when Merlin's dream puts them both at risk, Ransom must overcome his own fears and realize her invention may be the answer to saving both their lives...

This review was originally posted on June 2, 2008.

This was a cute book. I enjoyed it for the most part. The heroine bugged me a little. She is sooooo naive and innocent it is hard to believe. She was funny in her naiveté but there was no connecting with her because she was so clueless. It is hard to swallow just how sheltered she had been.

She has never left her isolated house in the country. She and her uncle just worked on their experiments and that was their life. She has never seen a child or baby, she has never seen a young man or been courted by one. She knows nothing about titles or that there is a hierarchy in the country besides the king/queen. She knows absolutely nothing about sex or lust or even kissing (never even heard of it). But this book appeals to my love of nerds. I love nerdy characters whether hero or heroine. She is very much the absent-minded professor.

Ransom, the hero, was a protector and very arrogant. Which is funny with a heroine like Merlin. He was a lot more alive to me than Merlin because I could relate to his fear and understand his POV. He is petrified of heights and equates heights with falling and dying. So the thought of Merlin finishing her flying machine and trying it out equals her death, which he is trying to prevent. Especially at this point in history when flying was not a thing that people could do. I don’t think that what he did to it was very nice, but I can understand the reaction.

I thought there would be a little more suspense or action and there was not but that was okay, this was not a romantic suspense. So for me, it dragged in a couple of places. It was a cute fluffy book, and good if you can get past the heroine. I just had a hard time with it. So I would give this one a:

This book is available from Sourcebooks Casablanca. But you can buy it here. Read more from Kris at The Reading Spot. 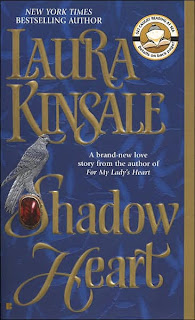 Allegreto, the charismatic young assassin from For My Lady’s Heart, takes center stage in this much-anticipated follow-up by New York Times-bestselling author Laura Kinsale. Known for her compelling, complicated characters, thrilling love stories, and rich historical background, Kinsale outdoes herself in Shadowheart. The dangerous and dashing Allegreto wants nothing more than to regain his rightful place in the rich Italian principality of Monteverde. Happily, the means to do so have just emerged — in the form of the young Lady Elena (also known as Elayne), newly discovered to be the long-lost Monteverde princess and sole heir to the kingdom. Though she is promised to his rival, Allegreto seizes her ship, takes Elena prisoner, and weds her, thus beginning their battle of wits and passion. While Elena is a naïve young woman when the book begins, by journey’s end she becomes Allegreto’s equal and, sometimes, master, reuniting the kingdom in the process.

I tried people. I really tried to finish Shadowheart but I can’t.

It started off really slow. I was on chapter 3 and I was ready to close to the book but I didn’t. It started to pick up once the hero of the book made his entrance but it wasn’t really enough to keep me interested in it. It was just really dry and slow going.

Elena finds out she’s a princess. Her guardian ships her back home to marry some guy. On the way, her ship is taken by pirates. Enter the hero. Turns out he smuggled her out of her homeland in the first place. She has faint memories of him and because she dreamed about him, she thought he was her guardian angel.

She tells Allegreto she does not want to marry the guy who is waiting for her, that she’ll do anything to not marry him. She wakes up with an awful headache and spots of blood on her sheets. A maid tells Elena she is now married and it was consummated. Elena is furious but tells everyone that yes, she wanted the marriage. It’s that or become soiled goods. Turns out the marriage wasn’t consummated. He made it seem like it was. Ok…

But the first time they do have sex, is not pretty. He doesn’t exactly force her but she fights him. She bites him and struggles. He doesn’t do anything to really soothe her or make it nice. It’s like it turned him on even more. And what I mean when I say he didn’t force her, he started off by kissing her and she realizes she likes it, that she is wanton. That’s when she struggles.

So I don’t know. I wanted to give this book another week to read but I’m just kind of tired of forcing myself to read it. Ames and someone else said the book is really good so I’ll try again later to read it. So for now, it’s upgradeable.

This book is available from Berkley Trade. You can purchase it here.