In this modern-day love story, Girl likes Boy, Girl takes photo of Boy and posts it online, Boy becomes accidentally insta-famous. And what starts out as an innocent joke spirals into a whirlwind adventure that could change both their lives—and their hearts—forever. But are fame and love worth the price?

Told in alternating points of view, #famous captures the out-of-control thrill ride of falling for someone in front of everyone.

I really interested in reading this book because of the internet fame angle. The girl captures a picture of the boy and tweets it to her bestie who RT’s the picture, attaching a hashtag that goes viral and before anyone knows what’s what, the boy is internet famous and he’s going on the Ellen show and he’s getting interviewed on the news and people want to be his best friend and he enjoys it for a while before all of it starts feeling fake. The only person that hasn’t changed throughout it all is his new friend, Rachel who is the girl that tweeted the picture of him.

This was a pretty short read and it’s marked as a Young Adult book but it read a lot younger than that. At least, it did for me. There was a simpleness to the story that made it really easy to fall into this book and on one hand, that was fun and it took no time at all to read it. On the other hand, it was hard to really connect with the characters because they didn’t feel fleshed out or well, real. This story was enjoyable but it was enjoyable in the sense that I enjoyed it from afar. Like, I enjoyed listening to my friend’s recount of the shenanigans over the weekend that I wasn’t around for. I didn’t feel what Rachel was feeling for myself. Or what Kyle was feeling.

So while I enjoyed the book for the fluffy piece that it was, I didn’t love it. Still, if you’re in the mood for a fun story that reads a little on the young side, this is a good one. 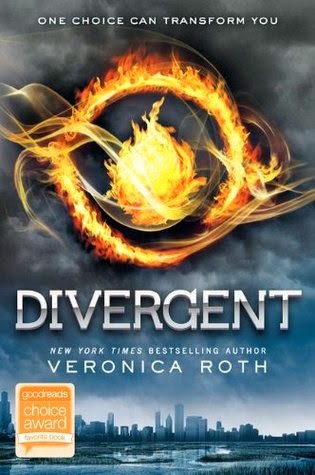 In Beatrice Prior’s dystopian Chicago world, society is divided into five factions, each dedicated to the cultivation of a particular virtue–Candor (the honest), Abnegation (the selfless), Dauntless (the brave), Amity (the peaceful), and Erudite (the intelligent). On an appointed day of every year, all sixteen-year-olds must select the faction to which they will devote the rest of their lives. For Beatrice, the decision is between staying with her family and being who she really is–she can’t have both. So she makes a choice that surprises everyone, including herself.


During the highly competitive initiation that follows, Beatrice renames herself Tris and struggles alongside her fellow initiates to live out the choice they have made. Together they must undergo extreme physical tests of endurance and intense psychological simulations, some with devastating consequences. As initiation transforms them all, Tris must determine who her friends really are–and where, exactly, a romance with a sometimes fascinating, sometimes exasperating boy fits into the life she’s chosen. But Tris also has a secret, one she’s kept hidden from everyone because she’s been warned it can mean death. And as she discovers unrest and growing conflict that threaten to unravel her seemingly perfect society, Tris also learns that her secret might help her save the ones she loves . . . or it might destroy her.

I’ve been meaning to read this book for quite some time now but never got around to actually doing it.  But with the movie’s release, I figured I had better get my ass in gear and right in the nick of time, I finished it.

I really liked it.

The beginning of the story was just a tad bit slow for me but in no time at all, I was knocked on my ass and the story really picked up.  I thought Veronica Roth did a fabulous job of making her dystopian Chicago world come to life through this book.  The descriptions were sharp and colorful and the dialogue was fantastic.

So this story starts with the introduction of the factions.  There are five factions.  Amity, Abnegation, Candor, Erudite and Dauntless.  The Amity faction is the peaceful faction that does a lot of the farming and takes care of the food for everyone.  The Abnegation faction is where all of the selfless people are.  They’re so selfless that people trust them to run their government so that’s where the government faction is.  The Erudite faction is where the knowledge seeking people live.  They’re the brainiacs who invent and know all.  Then there’s Dauntless.  They’re the warriors who protect everyone.  They train and they’re crazy but they’re also very protective.

Beatrice Prior is our main character and she grew up in Abnegation.  Her parents and brothers are selfless. They’re always willing to help others out and it’s natural for them to do so.  Not so much with Beatrice. She doesn’t feel like she belongs in Abnegation because it’s not second nature for her to give of herself, to give up her spot in line so that the older people can get through first.  Those things just don’t come to Beatrice’s mind so when it’s time for her to choose her future faction, she shocks everyone with her choice.

The entire story takes place as Beatrice, now known as Tris, learns and trains with the other initiates.  Over the course of the book, you see the change that comes over Tris.  She’s no longer Beatrice the Stiff.  She’s Tris, the badass.  And as she’s learning the ropes, things are popping up, putting her in danger.  As she goes about her business, Tris learns who she can trust and who she can’t.

When Four is introduced, I about fainted with glee.  I’ve heard nothing but good things about him and I knew that I was going to love him but I wasn’t prepared for how much I was going to love him.  He’s so mysterious and the mystery is interesting.  I wanted to know everything about him in the book and seeing him grow close to Tris made the story even more interesting.

I ended up really liking the book.  I liked it so much that I went to see the moving early and I even loved the movie.  Roth created a world that I came to really like and I cannot wait to keep the party going with the next book.

I definitely recommend this book.

This book is available from Katherine Tegen Books.  You can purchase it here or here in e-format.