A solitary hunter with no regard for the human world, Jagger Castille is a shifter living on the edge. A woman who calls him enemy will give him reason to live...
Jagger is a creature of the night—Skye Knightly soars in the sun. Natural adversaries, they are now joined in a mission entrusted to Skye's family centuries ago: nothing less than the salvation of the Earth.
Wounded and bitter, Jagger sought escape in the solitude of the jungle, driven by a need to disappear forever...until a mysterious shifter who calls to his soul and feeds a yearning long forgotten pulls him from his dark path. A courageous warrior, Skye's passion is equal to Jagger's—but can she trust a man whose secrets are as devastating as her own?
Each is the other's sole hope for survival. But a dark and twisted truth is leading them toward the ultimate sacrifice for a love they may never live to claim.

This review was originally posted on October 26, 2010.

I was really impressed with His Darkest Hunger. Really. The way it ended, with Jagger just disappearing into the jungle left me with high expectations for His Darkest Embrace. That turned out to be unfortunate because everything about Jagger was disappointing. He was an overbearing, egotistical arsehole who thought he knew what was best and that was that. It was enormously dissatisfying.

Skye is running from jaguar shifters—bad ones—when she is saved by one. As an eagle shifter, Skye is at her peak strength during the day. It’s her misfortune to get chased during the night when she can’t use her gifts. When she is saved by a jaguar shifter, she has little hope that she will survive. He seems almost feral which doesn’t give Skye much hope that she will accomplish her goal of saving the world. Yes—saving the world.

Jagger took to his jaguar form planning never to return. After so much pain and loss, Jagger can no longer bear to deal with human emotion. (Is that lame or what?) When he comes to Skye’s rescue, he is forced to shift, bringing all his emotions roaring to the surface. Of course the first emotion is raging lust. The lust he feels for Skye is all consuming and makes him all but mindless.

Things were going along quite swimmingly until Jagger’s friends and family catch up to them. At this point, they tell Jagger that Skye is an enemy and he decides to immediately believe them. He starts to treat Skye as his prisoner instead of a lover, which really teed me off. Honestly, it was such a one eighty after how hot and heavy he was feeling before that I just couldn’t get behind it.

As for Skye, I really found myself admiring her courage. By closing the opening between the realms, she is not only killing herself but surrendering herself to a lifetime of living in hell. How can you not admire that? Even when she started have feelings for Jagger, she was still determined to do what needed to be done. What I didn’t buy was how quick she “fell in love” with Jagger. How could she fall in love with such a jerk? Honestly. I’m still wondering.

I’m also wondering if the next book is going to be as disappointing as this one. 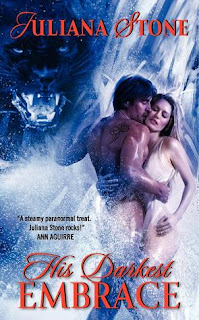 Tracy’s review of His Darkest Embrace

A solitary hunter with no regard for the human world, Jagger Castille is a shifter living on the edge. A woman who calls him enemy will give him reason to live . . .

Jagger is a creature of the night—Skye Knightly soars in the sun. Natural adversaries, they are now joined in a mission entrusted to Skye’s family centuries ago: nothing less than the salvation of the Earth.

Wounded and bitter, Jagger sought escape in the solitude of the jungle, driven by a need to disappear forever . . . until a mysterious shifter who calls to his soul and feeds a yearning long forgotten pulls him from his dark path. A courageous warrior, Skye’s passion is equal to Jagger’s—but can she trust a man whose secrets are as devastating as her own?

Each is the other’s sole hope for survival. But a dark and twisted truth is leading them toward the ultimate sacrifice for a love they may never live to claim.

Skye Knightly is an eagle shifter and she’s on the run from jaguar shifters when her life is saved by yet another jaguar. Since she is unconscious he takes care of her but in the morning she gets out as fast as possible. The jaguar who saved her life, Jagger Castille, is determined to find the woman and find out what it is about her that pulls him so strongly. He’s been living as a jaguar for 3 months but he’s ready now to get back into the land of the human living…once he finds the woman.

Skye and Jagger do find each other and Skye wants nothing more than to kill Jagger. Jaguar and eagle shifters have been enemies for years and the Skye finds it hard to trust that this jaguar wants to help her in any way. Sky wants to find a portal to the demon world and close it for good before a group of evil jaguars gets it and lets the demons loose. Though Skye accepts Jaggers’ help she’s not completely forthcoming with what exactly she needs to do in order to find the portal or exactly what the portal is.

I didn’t read the first book in this series and I think I probably should have before I started this book. I really liked the idea of the jaguar and eagle shifters and could appreciate their hate and distrust of each other but I felt that I was a bit out of the loop as to what was going on. There were characters that were obviously introduced in the first book that appeared for a short time in this book and I was a bit lost at times as to what exactly their role was.

I knew that there were bad shifters and even got to see them – but only just a little and I think it detracted, at least for me, the urgency of the mission that Sky was on. I understood that she needed to close this portal and that having demons in the world was a terrible thing to even contemplate but I think I would have liked to have seen the bad guys a bit more just to stress the need for the closure.

With Skye and Jagger – the book never stated that they were fated mates but I got the idea that they were. I liked the idea of the cat and bird as I couldn’t help thinking about Sylvester constantly trying to eat Tweety. lol Jagger was a much bigger cat and Skye a much bigger bird however so that definitely made it more plausible. I would have liked to have seen more romance but when you’re in the jungle, how is that possible? Jagger showed his love in the way he protected Skye – even if she believed that she didn’t need it.

Ms. Stone caught my attention with the uncertain ending of this book. I think I’ll go back and read book 1 before I attempt book 3 when it’s released.