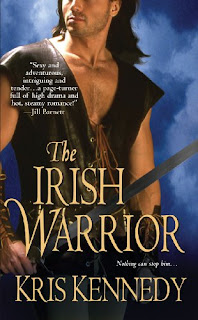 Holly‘s review of The Irish Warrior

As his men are slaughtered around him, legendary Irish warrior Finian O’Melaghlin is held captive by the despised English Lord Rardove. Struggling to break free, Finian finds aid from an unlikely source: the beautiful Senna de Valery, who is also trying to escape Rardove’s bloodthirsty grasp. Risking both their lives, Senna releases Finian from his shackles so they can both flee, but their plight has just begun…

Seeking safe refuge, Finian and Senna have only each other to depend on for survival. Neither can deny their immediate attraction, but indulging their desires will put them both in grave danger. Finian vows to protect the woman who saved his life, but he soon learns she is a pawn in a much larger battle. For Senna has an unbreakable link to a priceless treasure many centuries old. It is the stuff from which dreams are made and for which men will kill-and not even Finian may be strong enough to save her…

Last year Kris Kennedy blew me away with her debut medieval, The Conqueror

(only $3.99 at Amazon!). I’m happy to report she’s penned another winner with The Irish Warrior

Senna de Valery travels to Ireland to finalize a deal with Lord Rardove that will save her wool business. Only Senna doesn’t realize until too late that Rardove doesn’t want Senna’s wool, he wants her. For Senna’s mother was a rare dye-witch – someone who could make the famous Wishmé dyes. The Wishmé dyes are both beautiful and deadly, offering the owner of them the power to defeat any army. Rardove will stop at nothing to get them, even forcing Senna into a marriage she doesn’t want.

Finian O’Melaghlin isn’t just a warrior, he is also one of the king’s closest advisers. He and his men have been captured by Rardove and are being killed off one by one when they refuse to give Rardove the information he seeks. Finian knows they all must die rather than reveal what Rardove wants to know, but each man he loses is personal to him. When Senna arrives Finian is impressed with her spirit and ingenuity, even as he thinks her foolish to provoke Rardove, who has proven himself to be a madman.

Senna knows she’ll never make it out alive on her own. Desperate to escape, she risks everything to release Finian, praying he’ll help her to safety. Finian vows to protect Senna with his life, but once he realizes just why Rardove wants her, he isn’t sure he’ll truly be able to protect her. Because Senna holds to the key to something everyone wants, not just Rardove.

First, I have to say that this book is set in Ireland. I don’t think enough love is given to the Irish, either in historical or present-day novels. Kennedy really does a stellar job of highlighting the wild, untamed beauty of medieval Ireland. The setting and story are woven together beautifully, proving us with a rich, full-bodied reading experience.

Senna is a strong, resourceful woman. In a time when most women are thought of as nothing more than livestock, she runs a successful business and keeps her family together. Even in the face of great adversity, she still keeps her wits about her. She doesn’t falter or accept her fate, she fights for the things she believes in. One of the early scenes with her and Rardove, where he tries to force her to accept his suite, is one of the most compelling I’ve read in a long time. Because Senna shows such strength, such pride in herself, I was literally moved to tears. I had no problem seeing why Finian admired her so much.

Finian was a strong warrior, but he also had a playful, mischievous side. He didn’t take himself too seriously, and knew just when to lighten the mood. That isn’t to say he was a jester, he was simply multifaceted – strong, resilient, resourceful and, when the occasional called for it, playful. I absolutely adored him. His inner struggle over his conflicting loyalties was well done and fell right in line with the type of man he was.

The journey across Ireland’s sweeping landscape was harrowing and filled with adventure. And the passion smoldering between them was powerful strong.

The secondary characters were also well drawn, from the villian of the piece to the mysterious smuggler who played both sides. I was especially intrigued by Senna’s brother William, and hope to see a book for him released sometime in the very near future (hinthint).

I did struggle some with the explanation of the Wishmé dyes. Although I grasp the basic concept behind them, I was left feeling a bit lost about what exactly they were, where they came from and how exactly they were used. I wish Kennedy had spent a bit more time explaining the legend behind them and the dye-witches.

Overall I adored the Irish setting and rich characterizations. I dub this a stellar sophomore release and look forward to many more like it from Kennedy in the future.

This book is available from Zebra. You can buy it here