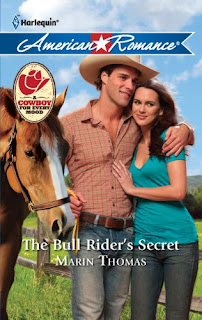 
Brody Murphy lives one day—one ride—at a time. No home, no responsibility, no one depending on him. As long as the bull rider keeps moving, he can keep it that way. But when Brody meets Ricky Sovo and his mother, rancher Katarina, he finds himself lingering in one place for the first time in years.

Kat’s unlike any woman he’s ever known—feisty, stubborn and determined to make it on her own. But that independent streak has gotten her in trouble with a couple of local ranch hands. She needs Brody’s help. Only, helping means sticking around, and that’s not something Brody can do. For Kat makes him want more from life, more than he feels he deserves. She may be his only chance at accepting his past…but he’s not sure he can ever stop running from it.

Harlequin has been providing fun reading for lovers of romance fiction for years.  As the decades have passed, their lineup of authors has expanded and their various areas of interest have expanded as well.  Here we have a classic “cowboy” novel that is set in contemporary times, involving a rodeo bull rider, a man who is tall and hunky, good looking and who fits the physical qualifications of being a man’s man.  But Brody Murphy is a hollow shell of a man, one who has decided that he doesn’t now or never will deserve happiness.  As long as he keeps moving he doesn’t have to face the deep and debilitating sense of loss or failure from his past.  He’s not any good at bull riding, but that appears to be relatively unimportant.  He works as a ranch hand long enough to earn his entry fees, put gas in his car and food in his stomach, and then he moves on.  It would also appear that he is not really aware that he is self-destructing and that’s OK.

Enter Ricky Sovo, a 13 year old kid who is hanging around the rodeo scene when Brody is looking for a partner in one of the events.  Together they win and begin becoming acquaintances.  Brody provides some transportation home for Ricky and it is there that Brody encounters not only Katarina, Ricky’s mother, but two ranch hands who are giving her considerable grief.  Because he gets involved in the war of words, Brody feels obligated to stick around and work at the ranch until Kat can secure some additional ranch hands or the owners return from the European vacation.  What he didn’t plan on is getting attached to Ricky who is really struggling with an absentee dad, or becoming overwhelmingly attracted to Kat, a woman of strength and purpose, whose entire life is built around her goal of providing a good life for her son, and who is now in a very precarious position as foreman of the ranch without anyone to do the tough work.  Because Brody is an experienced ranch hand, he is able to pull Kat’s bad situation  away from the brink of disaster, but all the while his own personal inner war is escalating.

This is not a simplistic boy-meets-girl-and-they-live-happily-ever-after kind of romance novel.  Rather, it is about deep hurt, the power of fear and guilt and self-recrimination to eat away at the inner core of a person, and the deep and ongoing disappointment that comes from failed relationships.  Ricky’s growing pains figure prominently in the story as does Kat’s increasing concerns that her “little boy” is growing up, is in serious need of some counseling about girls, and her almost continuous worry over whether she can prove her worth as a ranch foreman and do what needs to be done.  She so wants to make her job there permanent for her son’s sake.  Ultimately, at the core of this story is the power of authentic loving to redeem–literally “buy back” the sense of worth everyone needs to be a productive and caring person.  It is about the power of relationship to give each person a sense of “place” and to keep human beings balanced between their caring for others as well as caring for themselves.

I have not encountered this author previously but felt that her style of writing was very readable and she demonstrated a skill in telling the story that made the characters come alive and real–not sappy and overstated as is the case in some romance fiction. Brody as the main character was certainly at the opposite end of the “hero” spectrum but he was a character that came across as real, flawed, an emotional black hole that needing filling.  There were times, however, that I wanted to say:  “Get over yourself!”  But that is a remark that grows out of my own experience which is markedly different than his.  What would any of us feel if we were to be living his tragedy?

So I recommend this as a book that has some meat as a story, one that delves into the hurts that life can bring and the damage that people can bring on themselves and those they love.  It is a story that also offers “light at the end of the tunnel” and conveys some valuable insights on what relationships can and should be.

This book is available from Harlequin. You can buy it here Tanya Bledso couldn't wait to leave Crested Butte to chase dreams of Hollywood stardom. Now the single mom has returned to run the local theater and raise her daughter. But the peaceful, charming town she took for granted has exploded into a bustling tourist attraction, thanks to one man.
Jack Crenshaw. Property developer extraordinaire…and her former high school sweetheart.
Ten years hasn't cooled the heat between them. Worse, Jack is bonding with her daughter and giving her the crazy idea he'd make the perfect family man. But is he ready to forgive and forget the heartbreak of the past for the role he seems born to play?

I have three reviews up at The Good, The Bad and The Unread.

The Daddy Audition by Cindi Myers

Tanya Bledso couldn’t wait to leave Crested Butte to chase dreams of Hollywood stardom. Now the single mom has returned to run the local theater and raise her daughter. But the peaceful, charming town she took for granted has exploded into a bustling tourist attraction, thanks to one man.Jack Crenshaw. Property developer extraordinaire…and her former high school sweetheart.

Ten years hasn’t cooled the heat between them. Worse, Jack is bonding with her daughter and giving her the crazy idea he’d make the perfect family man. But is he ready to forgive and forget the heartbreak of the past for the role he seems born to play?

I enjoyed the basic premise of this story: heroine leaves to pursue her dreams and leaves high school sweetheart behind. Now she’s back and so is their attraction.

I liked both characters up until a certain point, but then the way they refused to talk to each other and their personal insecurities started to annoy me. I understood Tanya’s reasons for leaving, just as I understood Jack’s for letting her. But as the story progressed, I became frustrated with both of them.

This book is available from Harlequin American Romance. You can buy it here or here in e-format.

For Texas Cattleman’s Club member Lance Brody, marriage is about gaining the right connections. But one plain-Jane personal assistant is about to change his mind…For years Kate Thornton had dreamed of becoming Mrs. Lance Brody. Then her boss became engaged strictly for business and Kate had had enough. Giving her two weeks’ notice should have released her, but Lance’s eyes had finally been opened. Kate couldn’t be allowed to walk away from the business, or him. And if it meant taking her to bed to keep her…well, that was one job he would gladly do himself!

I liked this story on a superficial level. If I start examining the motives or actions of the main characters I have major issues. As a fluff story – something quick to pass the time – it was good, but there were a lot of flaws.

My main gripe is the heroine’s complete lack of identity away from the hero. Also, the fact that the hero was engaged to someone else for the entire length of the novel really turned me off, even though the circumstances were explained well enough.

This book is available from Silhouette Desire. You can buy it here or here in e-format.

The days of Susannah Everly dreaming about white dresses, churches and Trent Maxwell are long gone. So it’s more than a little funny that she finds herself actually married to the guy. But she’s determined to save the family ranch by any means possible, and if Trent is those means…Still, they both know the deal. This is a business arrangement and there are rules. Rules that do not include rekindling those old feelings or surprise midnight seductions. So what’s Susannah to do when Trent seems determined to break their agreement? Especially when what he offers is way too tempting.

I’m still formulating my thoughts about this one. I generally enjoy the reunited lovers plot line, but this couple was bitter and angry.

Susannah especially rubbed me wrong. She was bitter and angry, and her actions throughout didn’t speak well of her. She did her level best to treat Trent like shit, then complained when he didn’t fall all over her. Basically she was a complete and total bitch. This was explained away because of Trent’s actions in the past, but that was 11 years ago. I really felt like there should have been more growth on her part.

This book is available from Harlequin SuperRomance. You can buy it here or here in e-format.