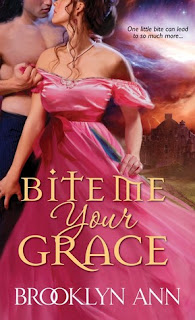 Tracy’s review of Bite Me, Your Grace by Brooklyn Ann.

England’s “vampire craze” causes much vexation for the Lord Vampire of London, Ian Ashton. To save his reputation, Ian enlists aspiring authoress Angelica Winthrop without realizing she has hidden plans of her own.

Angelica Winthrop’s life goal is to ruin her reputation, avoid marriage, and become a gothic authoress like her idol, Mary Shelley. To find inspiration for her new story, she breaks into the home of Ian Ashton, Duke of Burnrath, not knowing she will be coming up against the Lord Vampire of London. Romance sparks and reputations are at stake. But who knows the real difference between fact and fiction?

Anglica Winthrop is a good person. She cares about others, cares about women’s rights and loves her family. Unfortunately for her, her mother is a marriage minded mama and she doesn’t like the fact that Angelica wants to read and learn and write gothic novels, she wants Angelica to make a titled match. Now I’m sure that Angelica’s mother loves her but she has her own reasons for wanting her daughter making an advantageous marriage: she is the daughter of an Earl who will finally reconcile with her and give her money if Angelica makes a good marriage. That kind of got me thinking that the mom had complete mixed feelings about whether Angelica was happy or not and I’m sure influenced Angelica as well.

Angelica just wants to write and she’s thinking she needs to run away and live on her story profits but that doesn’t exactly work out the way she wants. She is fascinated by the Duke’s home that is huge, nearby and reputed to be haunted. She dresses like a boy and heads over to his home to get inspiration for a ghost story. She finds no ghosts but she does wake a very hungry Duke and gets bitten because he’s a vampire. You’d think that Angelica would be more freaked out but the tales going around about the Duke seem to be true and she kind of likes the idea. Because of her foray into the Duke’s home and things that happen after that Angelica is compromised.

The Duke is a very old vampire who has no plans on marrying. It’s said that the Dukes of Burnrath marry foreigners and live out of England until their “heir” comes to claim their inheritance. The heir is actually the same vampire but no one seems to catch on. The Duke, Ian, actually likes Angelica and when he proposes it’s to help her reputation but also to help the rumors of him being a vampire die down. Angelica doesn’t take to the engagement though and goes about trying everything she can to try and get it broken, which doesn’t work.

After they’re married the pair become closer but outside forces as well as the fact that Ian doesn’t age will play big roles in their future.

I liked this story and the premise but I felt that there was too much going on and that caused some of the story lines to not be completely fleshed out as well as they could have been. For instance the fact that Angelica is going to run away to escape marriage. Yes, it’s stated and the girl does go about trying to get Ian to break the engagement but really there’s not a whole lot of page time devoted to this issue and it’s a big one for Angelica. When she decides that she is going to marry him it didn’t seem like that big of an announcement to us or to the Duke.

Ian is searching for a man named John Palidori who wrote a story that eventually made people look at Ian and say, “Vampire!” Ian wants his London vamps to get this man but one of his vamps is in love with John and ends up harboring him with the thought that Ian will kill John if he finds him. The time spent on John and Rosetta’s (the vamp) story took away from the romance issue, imho. I know that Palidori needed to be included in some way because he wrote the story that started the vamp rumors but other than a mention I didn’t think that portion of the story was needed. There was also a vampire hunter that was given quite a bit of page time with his history and him becoming a hunter, etc. but in the end it was all anti-climactic for me. Again, and this is just my opinion, I thought that more time should have been spent on Ian and Angelica rather than take focus away and put it on these other secondary characters.

Now it might sound like I didn’t care for the book but I did. The story that we were given was a good one and quite entertaining. Ian and Angelica made a great couple, if not very communicative, and I loved seeing them work their way to their HEA. There were some characters in the story that are obviously going to be heroes of other books in this story and while I didn’t care for the sequel baiting I am interested to see what happens with those men.

This book is available from Sourcebooks Casablanca. You can buy it here or here in e-format. This book was provided by the publisher for an honest review.

They said it was supposed to be overcast today but so far it’s a gorgeous day here in Southern California. I did have a bit of a shock this morning on my way to work. After dropping the kids off in beautiful weather I drive down the street a couple of miles and found a wall of fog. Weird. (Not sure if you can see it) Yesterday the girls and I went to the mall to buy a gift for one of their friends and my youngest found these glasses. I couldn’t believe the amount of “stache” stuff they had on hand! Funny. Since I’m sharing pictures I thought I’d add this one in of my oldest and my kitteh, Echo. So cute together. If anyone else in the family tried to do that to the cat she’d run like hell. lol (It’s a little grainy, sorry)

So I started off the week with Frost Burned by Patricia Briggs. I just LOVE the Mercy Thompson series so much (thanks again, Renee) and this one was no different. In this story Mercy is almost on her own as she searches for the entire pack after they’re kidnapped. She gets help from unlikely sources and of course kicks some ass. As a bonus in this story we got 2 whole chapters from Adam’s POV! Woohoo! Good stuff! 4.5 out of 5

Next up was The Baby Bargain by Jennifer Apodaca. This story is about Adam who’s pretty messed up from his childhood and his horrible parents as well as another incident that is undisclosed. He is back in his hometown after being gone for years to sell his parents home with no plans to remain after the sale. That’s before he sees his old love, Megan, and the old feelings start to stir. Pile those feelings on top of the fact that he finds out he has a son and someone is framing Megan and Adam is suddenly feeling things he never thought he would, nor does he want to. This was a good category length story with a definite alpha hero. 3.75 out of 5

Still Life with Shape-Shifter by Sharon Shinn was not the shapeshifting paranormal story I expected. It was 2 stories in one that eventually intersect for a very short time. I can’t possibly even give you a little without telling you a lot of the story. It’s somber and dark and has to do with loving and losing those you love and how you deal with those people in life and in death. My review will post on Thursday over at Book Binge if you’d like to read more about the story. 4 out of 5

No Turning Back by HelenKay Dimon was a contemporary read about three brothers who claim a house that their grandmother had left them. Their father was a con man and he once stole from the town. Now there are more than a few that want the brothers gone, including Mark Baron. Mark’s daughter, Leah, was raised to hate the Hanovers and it’s her job to get them out of town. She’s nicer than her father though and while she’s trying to move them out she’s falling in love with brother number 2, Declan. This was an angrier book than I expected. The brothers have their issues with the town, the townspeople are divided on their feelings toward the brothers, Mark Baron is a complete ass and treats his daughter like dirt. Yes, there was an HEA for the most part but lots of things were left open when the book ended. It just wasn’t a happy tale to me, at all. 3 out of 5

Bite Me, Your Grace by Brooklyn Ann is the story of a woman who is caught in a compromising position (kind of) and ends up having to marry the Duke that lives nearby. He’s a vampire though and there are lots of things going on with her not wanting to marry him at first and with him trying to decide what to do with the little wifey in the future when she starts aging and he doesn’t. It was a decent read that was entertaining. 3.5 out of 5

Last for the week was Steamroller by Mary Calmes. How do I describe this story? Carson is a star player on the college football team – famous really – and he wants Vince. Vince has no idea that Carson knows he exists but when Carson makes his move there’s nothing Vince can say to deter Carson from his chosen path. The love story in this book happened SO very quickly but it was so well done that I was totally rooting for the guys to stay together. Carson was the steamroller and I loved his confidence in himself as well as the confidence he had in Vince. Really good. 4 out of 5

My Book Binge reviews that posted last week:
Mating Instinct by Katie Reus
The Geek Girl and the Scandalous Earl by Gina Lamm
From Here to Eternity by Paige Cuccaro