Sorry for the delay in announcing these. I’ve come to the sad realization that I’m not as young as I used to be. We had a great Halloween Party Friday, and it’s taken me this long to recover. Is that sad, or what? 😛

Anyway, on to the winners…

A signed copy of A Texan’s Luck

A copy of Twisted Creek and a Going Green Tote Bag

Congrats to all! Please email me at contests@thebookbinge.com with your mailing information and I’ll get your prizes out as soon as possible.

Thanks again to all who came and supported Jodi Thomas Week!

Apart from sharing the same zip code, Randi Howard, Anna Montano, Meredith Allen, Helena Whitworth, and Crystal Howard have absolutely nothing in common until a fiery explosion on a West Texas oil rig changes everything.

Their husbands are men who live to search for “black gold,” men who are willing to exchange backbreaking work and long days for danger and excitement–and money. But on a blistering day in early autumn four of the men pay the ultimate price–leaving behind one man who wishes he had.

In one brief moment, the tragedy binds Randi, Anna, Meredith, Helena and Crystal closer together than a lifetime of friendship. As they gather at the hospital, waiting to learn who among them will not have to bury her husband, they turn to one another for support. And so begins a journey of faith, of strength, of tears, and of love.

As I mention here on the blog often (read: all the damn time), I adore contemporary romances. There’s something wonderful about delving into a modern story, especially one with real characters and deep insights into human nature. This novel was exactly that. Once again I’m impressed with the character development Jodi Thomas excels at.

I want to be upfront and say this is less a romance (though it does feature romantic elements and an HEA) than a deep character study of five different women who come together over a tragedy. The bond women form with each other has always fascinated me. We love one another, protect each other, stand up to and for those we care about, not to mention bicker, argue and fight with each other. This novel showcases the complexities of female relationships in the best way.

Each woman was interesting in her uniqueness. Crystal, a trophy wife to an old oil tycoon. Randi, a restless woman who wants more than small town life. Anna, a foreigner who is isolated by her own upbringing. Helen, a strong, independent, uptight woman who is a pillar of the community. Meredith, a prim and proper grade school teacher. Five very different women who come together to form an unbreakable bond with each other.

I think Thomas really did a wonderful job of showing us how life in a small town works. Each woman had her place in society, and though they might have known the names of the other women, they didn’t socialize outside of a nod now and again. But within the space of moments, while they were waiting to find out which of them had become widows and which still had her husband, they became sisters.

As the story progressed we saw each of them face trials and tribulations with the help and support of the other four. I don’t want to give away too much of the story, but it was refreshing to see them all grow closer to each other as they dealt with their grief in different ways.

I did have an issue with the way the story progressed for Helen. She went into decline after the accident (she was the oldest of the group), though she continued to be the strong backbone of the group. But none of the other women seemed to notice – or care – that she wasn’t doing very well. I kept waiting for one of them to step in to make sure she was really alright, but it never happened. That left me feeling extremely frustrated.

I also expected quite a bit more drama. Or maybe just the tone of the novel to be darker. Thomas didn’t focus on the grief and tragedy, but instead on how the women moved forward with their lives. I really felt it worked, don’t get me wrong, but I was expecting something much different, so I was unprepared going in.

Although there are many central characters and plots and subplots, Thomas really did a great job of keeping the story tight. I didn’t feel confused or left out at any time during the story, even with the multiple POVs. The romantic elements were also very well done, even though they weren’t the main focus of the novel. At the end of the story I really felt each had found her own HEA, even if it wasn’t in the conventional sense.

This was a wonderful look at how women come together after a tragedy to prove there is life after death. Heartwarming and tender, this is a novel you truly don’t want to miss.

This book is OOP from Mira. You can buy it used here.

Since it’s Jodi Thomas Week, if you leave a comment on this post and you’ll be entered to win a used copy of this book along with a Jodi Thomas “going green” tote bag.

The three winners of copies of Demon Bound from yesterday’s giveaway are:

CONGRATS LADIES! I can’t wait to see what you think of it. Please email me at contests@thebookbinge.com with your snail mail addys and we’ll get your prizes out ASAP!

If you want another chance to win, go visit The Book Smugglers. Ana has a great review(beware of spoilers!) of the book up, and if you leave a comment you’ll be entered to win either a copy of Demon Bound OR a book from Meljean’s Backlist.

If you want the chance to win an even bigger prize, check out our Buy a Book, Win $100 contest! If you buy Demon Bound between today and November 15th, then show us proof of your purchase, we’ll enter you to win a $100 gift certificate to the bookstore of your choice! For full details, see here. 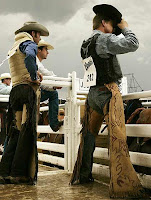 To continue with Jodi Thomas Week, today we’re going to talk about Cowboys. I’m a huge fan of cowboys. There’s something super sexy about a man in tight jeans who wears a stetson and ropes and rides. But it’s more than that. It’s the unwritten cowboy code. The chivalry, the ingrained need to protect and pamper. Yum. 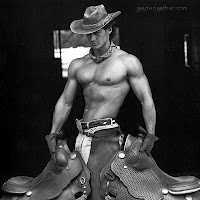 I especially love Texas cowboys. There’s just something about the slow way they move and talk, the quiet way they brood, their moral code. They say everything is bigger in Texas and I guess my cowboy crush proves that, huh? 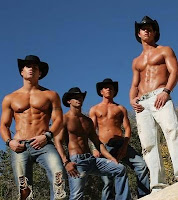 What about you? Do you love cowboys? Feel differently about the ones that are from Texas? Do you prefer modern day cowboys or the ones from the Wild West days? I’m sure I’m not alone in this.

Leave a comment here telling me 3 of your favorite things about Cowboys and you’ll be entered to win a Jodi Thomas “going green” tote bag and a copy of Twisted Creek!!