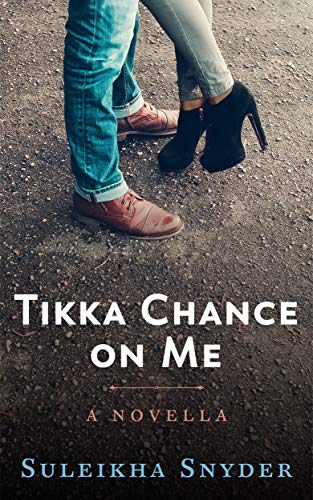 He’s the bad-boy biker. She’s the good girl working in her family’s Indian restaurant. On the surface, nothing about Trucker Carrigan and Pinky Grover’s instant, incendiary, attraction makes sense. But when they peel away the layers and the assumptions—and their clothes—everything falls into place. The need. The want. The light. The laughter. They have more in common than they ever could’ve guessed. Is it enough? They won’t know until they take a chance on each other—and on love.

Tikka Chance on Me by Suleikha Snyder is the first novel I’ve read by the author. Amazon popped it up in my recommendations several times, and Nalini Singh recommended it in her last newsletter, so I figured I’d give it a try. It was a great story.

Pinky Grover and Trucker Carrigan grew up in the same town. He was several years ahead of her in high school. She went away to college but left her graduate program when her mother became ill. Though she had fun partying at school, she’s kept things low-key at home. Her one guilty pleasure? Fantasizing about Trucker. He’s a bad-boy enforcer for the local motorcycle club, and totally off limits. But that doesn’t stop her body from wanting him.

Trucker has wanted Pinky for months, but he isn’t in a position to do anything about it. Until one day they end up getting busy in his truck at the local Walmart. Now he can’t stay away from her..even though he knows he has to. When things blow up, Trucker knows he has to walk away…but it isn’t easy saying goodbye to the best thing that’s ever happened to him.

I loved the witty banter between Trucker and Pinky. I also loved her sense of humor. Trucker is a total nerd boy and I loved that about him.

“You know, I had a girlfriend once who said she couldn’t suck my dick because she was vegan?”
“That…is not a thing. I think she just didn’t want to suck your dick.”

I’d had no idea there was an overlap in the motorcycle club and vegan communities. Who knew? Were there entire vegan motorcycle clubs? Did they wear vegan leather jackets?

I’m not completely satisfied with the ending. Perhaps it’s the short page count, or just the way the author resolved things, but I didn’t buy the final resolution. I won’t spoil the circumstances behind it, but needless to say, it didn’t work for me.

View Spoiler »I don’t understand how Ty could go back home with Pinky. There’s no way she wouldn’t go back to see her family, and as open as they all were with each other, I don’t see how she wouldn’t want him to part of that. So I don’t exactly get how that would work. « Hide Spoiler

Aside from the one issue, this was a great story. I enjoyed both Trucker and Pinky, the steamy scenes and the anticipation of figuring out just how they could make it work. Though short, I fully connected with both main characters. Snyder penned a beautifully engrossing tale that pulled me in from page one.