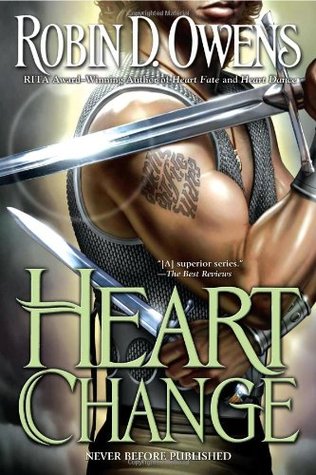 First time in print?the fantastic new Celta novel from the award-winning author of Heart Fate.
Signet D'Marigold's lonely life is shaken when a prophet reveals she is a catalyst for change. But to accept her new life-and the charge of the noble child Avellana-means embracing a danger that may be fatal for them both. Especially when Signet's attraction to her new bodyguard signals a secret enemy sworn to destroy them.

Holly: This series is still going strong. I love the world of Celta and look forward to falling into it with each new release.

This review was originally posted on November 2, 2009.

As I recently mentioned, I started this series with book 7, Heart Fate. Over the last month or so I finally caught up on the rest of the series (with the exception of one book I still need to read). I’ve really enjoyed the series up to this point. Owens truly excels at writing strong characters and excellent world-building. Each time I open one of these I can’t wait to fall into her world. I enjoyed some in the series better than others and I’d say Heart Change falls somewhere in the middle.

Signet D’Marigold has pretty much given up on life. She’s the last of her line and she’s practically drowning in loneliness. All of her friends seem to leave her, and because she doesn’t know what her flair is, she doesn’t really have a purpose in life. All that changes when Muin “Vinni” T’Vine, the teen prophet, shows up and says he knows what her flair is and he needs her help. She’s a catalyst. Just being near her changes the course of other people’s lives for the better.

Vinni’s heartmate, Avellana, is getting ready to experience her first passage – the time when flair (magical ability) is released for the first time. Because she suffered an accident in the past Vinni and Avellana’s parents aren’t convinced that she’ll make it through passage safely. Vinni requests that Avellana move in with Signet because he “saw” that she’d be able to help Avellana.

Avellana’s parents aren’t taking any chances with her safety and hire Cratag Maytree to guard her while she’s with Signet. Cratag has little flair, and ever since landing in Celta he’s been feeling displaced. He’s the captain of the guard for T’Hawthorn, but he knows he isn’t truly one of the family. That’s confirmed when T’Hawthorn assigns him to guard Avellana and Signet. Although he resents being shuffled around, he can’t help but look forward to spending time with Signet, as he’s been attracted to her for some time.

When this book first opens I wasn’t sure I’d like Signet. She was in the middle of a pity party and she didn’t seem like someone I could relate to. As the story progressed she really came alive for me. We come to understand the depth of her loneliness and despair and she really grows, accepting who and what she is. She really opened up throughout the story, not just to Cratag, but also to Avellana, Vinni and some of the other secondary characters. I really liked watching her come into her own.

As much as I liked Cratag in the previous novels, I wasn’t as impressed with him here. In some regards he was exactly what Signet needed. He was strong and comforting, and I liked that he really let her lean on him when she needed to, but also pushed her when needed to stand up for herself. He really encouraged her to become her own person, which was wonderful. As much as I liked him with Signet, however, I really didn’t care for him on his own.

He doesn’t feel like he’s good enough for Signet. Or really at all. Although he’s the captain of the guard for T’Hawthorn, because he has little flair he doesn’t really feel like he’s been accepted in Celta. So he holds himself back. While I understood this initially, I felt he took it too far. His inner dialogue was focused almost solely on his shortcomings – from his attire to his lack of flair – and it was frustrating. If Signet grew and found herself, Cratag almost seemed to move backward. He seemed more confident and sure of himself in the beginning of the novel than he did at the end.

Having said that, I did enjoy the progression of the relationship. I liked them together and really wanted to see things work between them. Had Cratag been a little faster to realize his own worth I think this could have ended up as one of my favorites.

I really loved the secondary characters. We met all of them earlier in the series, but they played a larger part here. I’ll be curious to see how things develop with Vinni and Avellana in the future, especially since some of the things that were revealed here still need to be dealt with. I can’t wait to see what happens with Laev, either. He’s Cratag’s young cousin and there was a good amount of the book spent on his story. I hope Owens picks up that thread again soon.

I also really liked both Signet and Cratag’s Fams. I couldn’t help but laugh when Cratag got a rolly-polly kitten as his, but they seemed to fit well together.

I enjoyed the suspense, though it wasn’t hard to figure out who the villain was. I think watching how the characters dealt with it made up for the lack of mystery. I really liked learning more about first passage and experiencing it with Avellana.

Overall I enjoyed the romance, though it had flaws. Despite my issues I feel it’s a good entry to the series and I’ll probably read it again.