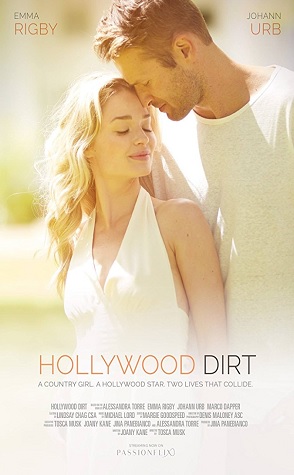 Hollywood arrives en force to Quincy, the small town where the secret Crown Cola billionaires live. They want to film about the billionaires and how they made their fortunes.. Summer Jenkins, who was the town pariah, joins forces with the scout, Ben, and finds filming locations, extras, liasons with the town officials and house owners, etc. When Cole Masten arrives, they hate each other, but sparks fly. Cole is running from a nasty divorce, yet is captivated by Summer. Summer is dying to leave town to get away from the gossip. This is a great story about Southern customs, a Southern girl, and a Hollywood star who finds his lady.

When we first found out that Passionflix was becoming a thing and that they were turning our favorite romance novels into movies, Holly and I became founding members. We paid our $100 for a 2 year membership because we’re nosy and wanted to know everything there was to know about what the plan was and we wanted the exclusive behind the scenes scoops. I was pretty excited before I found out that the first movie they were working on was a book that I actually read not too long ago. It was also a book that I enjoyed so woo hoo for me.

I followed along with Alessandra Torre on Instagram as she posted about their progression on the set and I was thrilled with the casting for both Cole and Summer even though I hadn’t a clue who they were.

When September 20th hit, it took me a couple of days before I could muster enough courage to watch the movie. Even though I had high hopes, a little part of me was expecting another Rose Hill and you guys….Hollywood Dirt is no Rose Hill. It’s way better. You can read my thoughts on the book here.

So this movie is about Cole Masters. The A-list actor who finds his wife cheating on him. To get through the hurt and divorce proceedings, Cole throws himself into the movie that is supposed to be all his but of course, his wife wants in on that action too. Cole heads to Quincy to get as far away from L.A. as he can and there he meets the girl who will become his female lead and the girl that will claw her way into Cole’s heart…the heart that Cole has no plans of ever feeling again.

Summer Jenkins has no plans of falling in love again after the last time. She lives in a town where she doesn’t have any friends and where she’s whispered about everywhere she goes. When Ben comes into town to scout possible film locations for Cole’s film, Summer becomes Ben’s hometown helper and they become friends and before Summer knows what’s what, her southern charm has wormed its way to Cole Masters and he approaches her about starring alongside him in the film.

Cole and Summer are like oil and water at first. They do not get along. Cole is an entitled dickhead to Summer and Summer is having none of it. Seeing them fall in love on the screen of my iPhone 7 was fun though I wish I could have watched the movie on my TV via my Amazon Fire Stick or even just on my smart TV. I’ve got my fingers crossed that we’ll get that soon but anyway, back to the movie review.

Watching the movie was like reading the book. Everything that I remember from the book happened in the movie. So that part of the whole books to movie bit was pretty spot on, for me. I thought the tone of the movie was the same as the tone from the book so I was a happy camper where that was concerned.

The acting on this movie was good. There were some characters where I thought the delivery of their lines were a bit cheesy (Ben is one, off the top of my head) but for the most part, I enjoyed every one.

The guy that played Cole looked the part but his American accent wasn’t completely believable. I could tell straight off that he worked to sound like an American. It was in the way that he delivered some of his lines. It was, I don’t know, too slow? I’m from California and we talk really fast and Cole…didn’t. A lot of lines from the book were delivered at a much faster pace in my head while I was reading it then when Cole was saying them in the movie. That’s not to say that I didn’t enjoy what he brought to Cole’s character on the small screen.

Then there was Summer. The girl that played Summer was gorgeous. She totally pulled off Summer’s look with ease. She looked like a Southern belle but holy cow, she sounded like she was on the verge of orgasm every time she opened her mouth to deliver a line. About halfway through the movie, I was like, dude, knock it off! Haha. Aside from that, I really had no gripes about her portrayal of Summer Jenkins. She did good.

I’m glad that I read the book and watched the movie. It was a great effort for a first movie though I did notice that they spelled Alessandra Torre’s name wrong in the movie. It’s spelled with two L’s instead of the 1 L that’s on all of her books. It’s not a big deal, I guess but if I wrote a book and it was turned into a movie, I would be annoyed that my name is wrong.

So I’ve got one movie down and am anxiously waiting for the release of the next one. Keep up the good work, Passionflix.