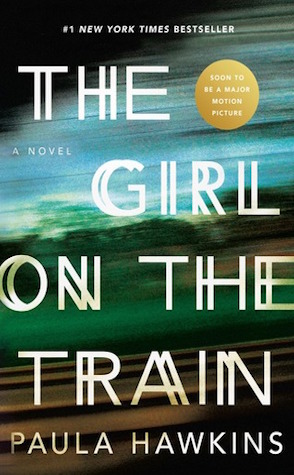 Reviewer: Rowena
The Girl on the Train by Paula Hawkins

The debut psychological thriller that will forever change the way you look at other people's lives.

EVERY DAY THE SAMERachel takes the same commuter train every morning and night. Every day she rattles down the track, flashes past a stretch of cozy suburban homes, and stops at the signal that allows her to daily watch the same couple breakfasting on their deck. She’s even started to feel like she knows them. Jess and Jason, she calls them. Their life—as she sees it—is perfect. Not unlike the life she recently lost.

UNTIL TODAYAnd then she sees something shocking. It’s only a minute until the train moves on, but it’s enough. Now everything’s changed. Unable to keep it to herself, Rachel goes to the police. But is she really as unreliable as they say? Soon she is deeply entangled not only in the investigation but in the lives of everyone involved. Has she done more harm than good?

I read this book for book club at my friend Ames suggestion. We got a request for a mystery or a thriller for this month’s book and Ames thought this book fit the bill, especially since the movie was coming out soon as well. It worked out really well. Our discussion for this book had me riled up one minute and then laughing like a lunatic the next. It was a great discussion book so thanks Ames!

Anyway, so this book follows drunk ass Rachel, hoe ass Megan and punk ass Anna. They’re three different women, living three different lives. Rachel is a drunk that pretends to go to work every day but really just rides the train back and forth. Megan is married with benefits only her husband doesn’t know about her side benefits and Anna..Anna is the punk ass that stole Rachel’s husband. Rachel watches Megan and her husband Scott every day on the train because Megan lives on her old block (that she used to live on with Anna’s husband) and it’s near the train. She becomes curious about this couple that is living their life on display from the train. Rachel can see their morning routines, she can see when they’re happy and when they’re not happy. Their lives play out every day for Rachel to see so when Megan goes missing, the news is lit with news story after news story about Megan and her disappearance.

Rachel has not moved on from loving her ex-husband Tom. She’s a raging alcoholic who blacks out when she drinks too much but she doesn’t even care because she still drinks too much, all the time. Rachel has a tendency of showing up or calling Tom every week and Anna is fed up with her shit. Anna hates Rachel and while I can understand where she’s coming from, I didn’t sympathize with Anna much and that was mainly because she was a bitch.

Megan’s disappearance shakes up the neighborhood. It shakes up Rachel too because Rachel was on the block that night but she drank so much that she can’t remember much about it. Her memory is coming back to her in bits and pieces and because it took her so long to figure things out, I wanted to punch her in the tits. She got herself involved in shit she had no business getting herself into and for what? A whole lot of trouble. I have to admit that there were times when I wanted her to get choked the hell out because WHY RACHEL? WHY???? GET YOUR LIFE RACHEL!!!

Megan’s story was equally messed up because she was messed up. I didn’t connect with her character at all so her being missing didn’t really affect me one way or the other. And Anna? Ugh, she’s another one that I wanted to punch in the tits because she was just awful. She showed no remorse for falling in love with another woman’s husband and she was actually a bit proud of herself and ugh, I wasn’t about being her friend.

The mystery surrounding Megan’s disappearance was what kept me from DNF-ing this book. The beginning was hard to get through because all I wanted to do was pull Rachel’s hair or kick her out of Cathy’s apartment but the last part of the book when everything starts coming together, I couldn’t put the book down to save my life. Everything was happening and light was being shed on the case and I couldn’t get enough. When the villain is revealed, I was so shocked that I tried lurching up in bed and my iPad fell on my face. So in the end, I was glad that I read the book but it was a trial to get through because everyone was so unlikable. Even Scott.

But you know what??? I can’t wait for the movie!

2 responses to “Review: The Girl on the Train by Paula Hawkins”