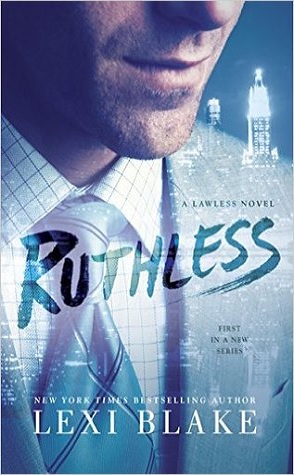 The Lawless siblings are bound by vengeance. Riley, Drew, Brandon, and Mia believe the CEO of StratCast orchestrated their parents’ murder twenty years ago to steal their father’s software program. And there’s only one way Riley can find some solid evidence...   Heir to the StratCast legacy, Ellie Stratton hires a new attorney to handle a delicate business matter—and she’s shocked by her attraction to him.

Over the course of a few weeks, Riley becomes her lover, her friend, her everything. But when her life is threatened, Ellie discovers that Riley is more obsessed with settling an old score than in the love she thought they were building. And Riley must choose between a revenge he’s prepared for all his life and the woman he’s sure he can’t live without...

I’ve been seeing Lexi Blake books around a lot lately and I’ve wanted to try her stuff out but never got around to it or wasn’t in the mood to jump into a series already on Book 3 or whatever so when I read the blurb for this book, I wanted in. A bunch of siblings getting revenge on the people who murdered their parents and wrecked their lives? One of the siblings falling for one of the marks? Yeah, I’m totally in.

Riley Lawless was 12 years old when his parents were murdered. His life was ripped apart just like his family was and it took years before he was able to reunite with all of his siblings again and the need to avenge their parents has always been strong with him. It was what he grew up planning, wanting more than anything else. His part of the revenge was to get his law degree and learn all things about the justice system and be the lawyer that his siblings needed him to be.

It’s twenty years later and all of their plans are now in play. Riley is the family lawyer and is undercover as Riley Lang, the lawyer that was just hired by Ellie Stratton, the daughter of one of the guys that had a hand in his parents death. Everything was going according to plan until Riley falls for Ellie. Then things got really interesting, really fast.

Ellie is still reeling from the bomb that her father dropped on his deathbed and she’s making plans to try to fix as much of the mess her father left behind as she could and she’s got to do it on the down low because a lot of her plans stem on the buyout that she hired Riley Lang to help her with. She needs to buy her father’s partner, Steven Castallano out of his shares in the company to have control to do what she needs to do but things are moving slow on that front. Before she knows what’s what, she’s in a relationship with her newly hired hot lawyer and bombs are being dropped on her from every angle. Like I said, things got really interesting, really fast.

While I liked Riley and his siblings, I also really liked Ellie and didn’t like the secrets and the part about her being a pawn in their little revenge games. I thought Blake did a great job of pulling the emotional ties with Riley out because I could see him really struggle with being loyal to his family and the plans they set in motion but also the ties he made with Ellie once he got to know her.

The struggle that Riley goes through in this book went a long way in taking the sting out of my struggle with how fast the romance seemed. How fast Riley fell for Ellie. I guess I wanted a bit more out of that but I can’t deny that their romance was steamy and absolutely compelling.

I wasn’t too wild about the lengths that Riley went through to get his revenge but I can’t help but wonder if I’d do the exact same thing were I in his shoes. His family was counting on him and he didn’t want to let them down but his feelings for Ellie were clouding his judgement and the entire book was one dramatic event after the other but I liked it. I liked all of it. I’m interested in where this series is going so I’m definitely going to be reading the next book and I’m anxious for it.

Overall, this was a great first Lexi Blake book for me and I’m looking forward to more Lawless sibling goodness. I definitely recommend.