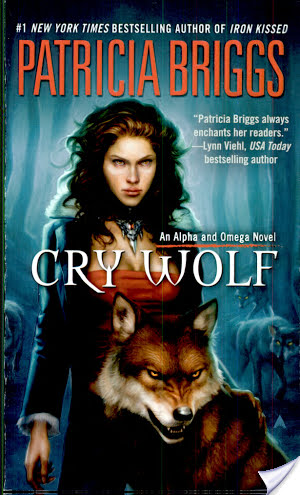 Now Briggs begins an extraordinary new series set in Mercy Thompson's world--but with rules of its own.
INTRODUCING THE ALPHA AND OMEGA NOVELS...

Anna never knew werewolves existed until the night she survived a violent attack...and became one herself. After three years at the bottom of the pack, she'd learned to keep her head down and never, ever trust dominant males. But Anna is that rarest kind of werewolf: an Omega. And one of the most powerful werewolves in the country will recognize her value as a pack member--and as his mate.

Rowena: Cry Wolf is the first full length book in the Alpha & Omega and it introduces us to the world of Charles Cornick and Anna Latham. Charles is a dominant werewolf who works as the enforcer for the Marrok and Anna is a newly turned werewolf who was abused and mistreated until Charles shows up and saves her from her old pack.

Over the course of Cry Wolf, there are many things at play. There’s a rogue wolf taking out humans, there is the whole mating thing between Charles and Anna and the list goes on and on but one thing that I found interesting was how well Briggs was able to juggle all of those different story-lines and still deliver a fantastic book. I thought she set up the rest of the series incredibly well and am really looking forward to digging into this series.

Holly: Briggs is a master at keeping things together. You haven’t read her Mercy Thompson series, but the way she weaves the threads from that series and this one together is nothing short of awe-inspiring.

I really love Charles and Anna, but it was the world itself I was invested in. The secondary characters, the strange dreams Asil was having, the Marrok and his pack, the politics, etc. All of it was fascinating.

Rowena: Yes. I found it interesting that as much as I loved the bits with Charles and Anna figuring things out between them, I was just as interested in everything else that was going on. From Walter and the rogue wolf to the Marrok and his mate to just…everything. I wanted to know all of it.

I will say that things started off a bit slow for me. I think I was much more anxious for things to get rolling that I slogged through the beginning but after I finished the entire book, I went back and read the first part of the book and was taken aback and how thorough Briggs is with just everything.

After finishing, I wanted to know everything. I want to know what happens now. Are there any lingering affects with the Marrok? What happens now with Charles and Anna? What about Samuel? There’s a lot to dig into and I’m looking forward to all of that.

Holly: I thought the beginning was a bit slow as well. When they started looking for the Rogue is when it picked up, I think.

I love that though Anna and Charles are fated mates, it wasn’t a quick fall into love and comfort for them. They barely knew each other, and I think Briggs handled that well.

Do you think you’ll read the Mercy Thompson series?

Rowena: Oh, definitely. I’ll be all over that Mercy Thompson series for sure.

Man, that whole thing surrounding the Marrok and what happens to him when the Black Witch gets her claws into him? Do they dig into that whole thing in the coming books? I’m really interesting in reading more about that.

I really liked that Charles wanted Anna to be sure, that he gave her a choice in the matter of becoming his mate. I liked seeing them both battle their feelings along with everything else that was going on. When she introduces herself as Anna Cornick? I cheered like a crazy person!

What did you think of the suspense portion of the story? The witch and all her shenanigans?

Rowena: Good, I’m glad to hear that cause I found myself more curious about him as I read through this book.

That woman was crazy and for her to be crazy for those many years? I also thought she was pretty crafty too. I don’t think I’ve seen anyone do what she did in any other paranormal series that I’ve read. At least I can’t remember so her whole deal and her obsession with the Moor was mind boggling good.

What about that rogue wolf? I thought Walter was a fantastic character and even though we don’t really dig deep into her character, we got enough that I was completely in love with him.

Holly: I thought Walter was pretty great. His back story made me sad,but I liked the person he was.

The world is fresh and imaginative. I love Charles and Anna, too, as well as all the secondary characters. I’m giving this a 4.25 out of 5.

Now we just need to get you to read the Mercy Thompson series. 😉

Rowena: Overall, this book was an entertaining read. I’m really enjoying getting to know not just Charles and Anna but the other people in their world as well. Bran, Samuel, Asil and so many others. I like that the Alpha & Omega novella tied right into the beginning of this book and I can’t wait for more.

Oh, I’m definitely reading Mercy Thompson…especially since I read Fair Game and have already met her mate, Adam. I want to know more about him.