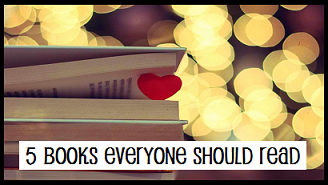 Today we have the insightful Willaful here to discuss her Five Books.

Georgette Heyer was the romance I read when I didn’t read romance. After a stint of Barbara Cartland and Harlequin Presents addiction as an adolescent, I got very snooty about the whole genre. Then, as a teen, a friend turned me on to Heyer. Though I dabbled with a few other romances for the next 30 years or so, everything I tried seemed like a pale imitation of the Master.

When I joined a Heyer listserv, I discovered something odd. Some of the books most beloved by others were ones I didn’t much care for; conversely, my favorites weren’t always enjoyed that much by others. Although this no doubt has something to do with my age when I read them, I also think those people who were primarily romance readers saw the books through a different lens than I did: I certainly enjoyed the romance in Heyer, but I had no strong expectations about what it should look like. (For example, there some on the listserv who found the name “Waldo” so unromantic it turned them right off his book.) I read for the vibrant characters, the feel-like-you’re-there settings, and perhaps most of all, the humor. 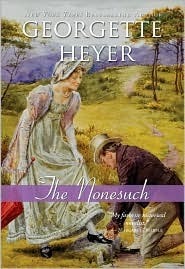 1. The Nonesuch by Georgette Heyer

When they learned that Sir Waldo Hawkridge was coming, the village gentry were thrown into a flurry. The famed sportsman himself! Heir to an uncounted fortune, and a leader of London society! The local youths idolized “the Nonesuch”; the fathers disapproved; and the mothers and daughters saw him as the most eligible–and elusive–man in the kingdom.

But one person remained calm. When she became a governess, Ancilla Trent had put away romance, and at first she could only be amused at the fuss over Sir Waldo. But when he ignored the well-born beauties of the district, a shocking question began to form: could the celebrated gentleman be courting her?

The Nonesuch. This is the dreadful “Waldo” book, and I very much enjoy the mature, gentlemanly, but slyly witty Sir Waldo. I also found his heroine rather delightfully shocking: a very well-bred governess, she deals with her insufferable charge through careful manipulation, realizing that there’s no sense appealing to a better nature the impressively narcissistic Tiffany doesn’t possess.

2. The Unknown Ajax by Georgette Heyer

Making the best of a bad situation, Anthea Darricot was civil to her newly-met cousin Hugh, but only barely. For Anthea, reduced to accepting the charity of irascible Lord Darricot, had been ordered to marry Hugh–the new heir to the Darricot fortune. Grandfather Darricot’s plan seemed perfect, to Grandfather: Hugh, the offspring of Darricot’s son and a common weaver’s daughter, might bring an unsuitable and low-bred wife into the family. To prevent this disaster, Hugh must marry Anthea. Knowing this, Anthea detested Hugh on sight, and Hugh seemed indifferent to her. But no one had consulted Hugh, and he was forming plans of his own….

This is another book that is sometimes considered to fail in the romance department, since the heroine spends most of the book being amused by the hero, who’s pretending to be a total goofball. But he doesn’t just have a wicked sense of humor — he’s great in a crisis, utterly dependable, and best of all, HUGE. I’ve been madly in love with him since I was 15 and was lucky enough to (essentially) marry him. 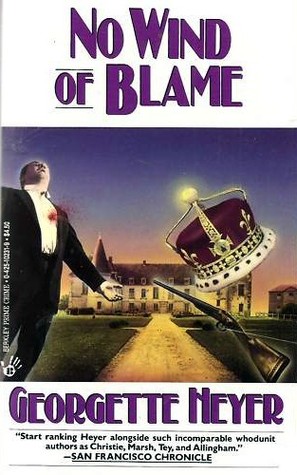 3. No Wind of Blame by Georgette Heyer

Tragedy befalls the Carter family following an eventful visit from a Russian prince and a scandalous blackmail letter. The murder of Wally Carter is a bewildering mystery — how does one shoot a man crossing a narrow bridge without being near the murder weapon when it is fired? The analytical Inspector Hemingway reveals his unnerving talent for solving a fiendish problem.

Almost every character in this mystery is adorably ridonkulous. My favorite is Vicky, a dramatic young woman whose entire life is composed of putting on different acts, and who speaks in a affected style that is somehow thoroughly beguiling. Even after finding a dead body, she’s in top form: “you can’t start a necking-party now, because it would be too utterly anachronous!” ‘Oh, he looked totally dead!’ (A little before her time, slang-wise?) Considering how well she orchestrates situations to suit herself, it’s a good thing there’s also a warm heart hiding beneath the style. 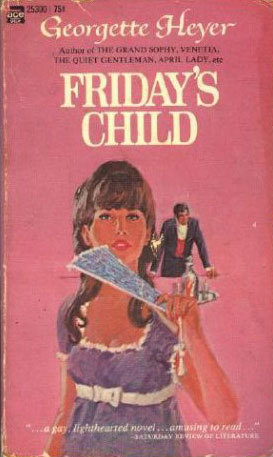 When the incomparable Miss Milbourne spurns the impetuous Lord Sherington’s marriage proposal (she laughs at him-laughs!) he vows to marry the next female he encounters, who happens to be the young, penniless Miss Hero Wantage, who has adored him all her life. Whisking her off to London, Sherry discovers there is no end to the scrapes his young, green bride can get into, and she discovers the excitement and glamorous social scene of the ton. Not until a deep misunderstanding erupts and Sherry almost loses his bride, does he plumb the depths of his own heart, and surprises himself with the love he finds there.

If P.G. Wodehouse ever wrote Regency romances, they might be something like this. The romance itself can be problematic, but the supporting cast of affable but generally clueless young men about town, just educated enough to be confused, really makes the book. 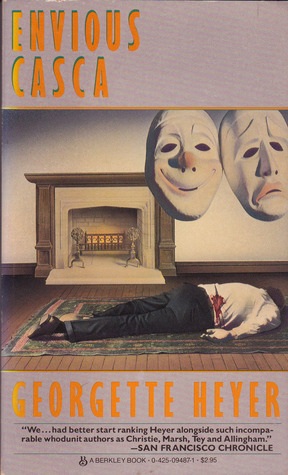 It is no ordinary Christmas at Lexham Manor. Six holiday guests find themselves the suspects of a murder enquiry when the old Scrooge, Nathaniel Herriad, who owns the substantial estate, is found stabbed in the back. For Inspector Hemingway of Scotland Yard, ‘tis the season to find whodunit but it’s a real conundrum how any of the suspects could have entered the locked room to commit this foul deed in the first place.

If there’s a theme to these picks, it’s over-the-top characters and masquerades. This mystery combines both in a fascinating way. I’ve always been intrigued by the placid, rather despised Maud, who refuses to pay attention to what anyone thinks or expects of her, especially when it comes to reading.

“Mathilda sat beside her, and laughed when she saw the title of the book Maud had been reading. ‘Last time I was here it was the Memoirs of a Lady-in-Waiting,’ she said, teasing Maud.
Mockery slid off the armour of Maud’s self-sufficiency. ‘I like that kind of book,’ she replied simply.”

I have long since gotten over being snooty about romance. Though I’ve never been able to go back to Barbara Cartland, these days I love nothing more than a good Harlequin Presents. I blog at “Heroes and Heartbreakers” and “A Willful Woman.”

Check her out online:

7 responses to “Five Books Everyone Should Read: Reader Willaful”