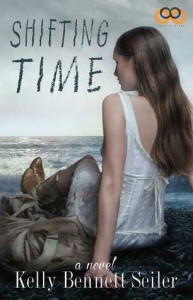 Despite her great life in New York City as a prestigious book editor, Meade Peterson can’t shake the heartache of losing her high school sweetheart. Fifteen years after his death, she still thinks about all the things—love, family, happiness—she’ll never have, now that Daniel’s gone. That is, until a new man, Tanner, enters Meade’s life and brings her the kind of joy she hasn’t experienced in years. She’s torn, though, over whether she can bear giving her heart away again. Taking time to reflect, Meade returns to her hometown of Austin for what should be a relaxing visit—but instead, she becomes the victim of a violent crime.

Upon waking from her real-life Texas nightmare, Meade finds herself in another world where she doesn’t recognize anything, until she realizes the man in bed beside her isn’t a stranger—it’s Daniel. Meade has awakened into an alternate existence where Daniel is very much alive, and has been part of her life for the past fifteen years.

Meade can’t believe her good fortune—she’s finally experiencing the life she’s always wanted! Or is she? As Meade quickly learns, if one thing in your life changes, nothing else may stay the same. And now she’s forced to face the question: Is what she’s gained worth what she’s destined to lose?

When Meade Peterson was in high school she dated her best friend, Daniel, and they were totally in love. Unfortunately Daniel didn’t survive his fight with Leukemia and Meade was left to live life on her own, which she’s done – completely on her own with Daniel living just under the surface of her skin. She’s now 30 years old and she rarely dates – more or less just hooks up with guys. When she does decide to take things further they don’t seem to work out – which she’s secretly happy about – until her secretary fixes her up with Tanner. From the very beginning of their date Meade is struck with how comfortable she is with him and knows that he’s a dangerous man as she knows he’s someone she can fall in love with. But she loves Daniel and told him before he died that she would always love him.

When visiting family back in Texas Meade becomes a victim of a mad man. She wakes up in the hospital but her life has changed. In the life she’s now living Daniel never died and things are so very different and she’s not sure she’s up for the challenge that these changes pose.

I can’t tell you too much about the intricacies of the book because I would give too much away and part of the charm of this book is watching the events unfold.

The story was much better than I expected. I love time travel but this wasn’t exactly that, as I discovered. This was a journey into an alternate reality (that is completely explained at the end of the book but is still quite heavy on the paranormal) that shows Meade what life would have been like had Daniel not died. I guess we all wonder at times in our lives “What if?” What if I had done things differently or what if that person hadn’t died when they did, etc.? This is what Meade asks herself but when she finds out she’s not sure she likes what she finds. Now, did I honestly believe that that’s how her life would have gone for her/them? IDK, I can’t say that I was completely convinced of Daniel’s behavior in that alternate reality. It certainly didn’t fit with what little we knew of him at the beginning of the book and that bothered me. I really enjoyed Meade in both realities, that’s for sure. I thought that she was a great character and loved reading about her.

The relationship that Meade had with Tanner was unfortunately not developed as much as I would have liked. They really didn’t spend much time together before things went into the alternate reality but Meade seemed to be in love with Tanner despite that. I wasn’t as convinced but it was very sweet nonetheless.

Overall I really liked this story, the writing and the characters and felt it was well done. This is the first novel by this author and I will definitely keep my eye out for her future books.

This title is available from Infinite Words/Simon & Schuster. You can buy it here or here in e-format. This book was provided by the publisher in exchange for an honest review.