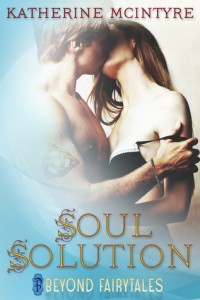 For Erik Anderson, the Copenhagen line is his curse. He takes the train every night en route to collect souls. Like any lovelorn fool, he bargained his own long ago, and now pays the price—a lifetime of loneliness as a grim reaper. Stay distant—that’s been his mantra and what keeps him sane.

Until Mina Castner drops into his life like a whirlwind, one spilled drink leading to staying up until dawn with the woman. He believed one night couldn’t hurt, but he sorely underestimated her determination. Every encounter between them is reprieve from the guilt of reaping souls every night, but it can’t last. Even if she sparks long buried feelings, and even if her sheer presence intoxicates him, he can’t let this continue. For humans, his touch is poison, and if he slips up, it could cost her life

Mina is at a club on a blind date and having a horrible time when she almost literally runs into Erik. Taking the golden opportunity to ditch her horrid date she offers to buy Erik a drink and they spend all night talking in a lounge. Mina is incredibly attracted to Erik but they don’t exchange numbers when dawn rolls around. Even though she wants to see him again she has no way of contacting him except that she knows that he said that his life consisted of clubs and the Copenhagen line (train).

Erik is a grim reaper and collects souls. His is a very solitary life and the guilt over what he does swallows him up almost every time he has to take a soul. He goes to clubs that are in cities that travel the Copenhagen line – disembarking at the next city every night. As he can tell those who are at deaths door, and don’t even know it, he takes those souls. He is completely intrigued by Mina and her outlook on life. When she shows up at the club the next night on the next stop on the line he’s shocked but thrilled. He can’t touch her, however, as every time he touches her her body will decay more and more (as apparently everyone’s does daily from birth). He feels the same connection that Mina does but will only agree to seeing her every night until the end of the line. Once they reach it in a few days he’ll never see her again.

Mina knows that there’s something strange about Erik but he won’t share and she doesn’t want to push him. She doesn’t understand him as she can tell he feels the same way about her that she feels about him but she’s willing to agree to just the end of the line in hopes that she can change his mind. Unfortunately things don’t end up anything like they thought or could have even imagined.

So, Erik is this grim reaper. We know he became this after he sold his soul for a woman’s life – the woman he loved. Apparently that woman, once she found out what he had become, thought he was a monster and kicked him to the curb. We never actually get the full story on that so we can only imagine what the situation was. Erik has to collect 1000 souls in order to complete his contract. We never find out how long he’s been a reaper or how many souls he has left to collect. We’re given to think that it’s been a damned long time since he began and that it will be a damned long time until he’s done. Now, maybe I’m being way too practical, and I know that the book said that he had spent a bit of time refusing to collect souls at all but…this should not take all that long. If he went to the clubs every night (which it appeared he did) and collected a soul a night this should take him a little less than 3 years. Even at a few a week it would still only take a few more years than that. I was just very confused as to why it was taking so long to fulfill his contract. Now if it was 100,000 I could see how it would take for freakin’ ever. I also wasn’t sure what he became in order to be a reaper or what he became after he was finished. Also, how can no one think it’s weird that someone dies every night in a club in a different city along the train line? Wouldn’t someone suspect? I think my brain was just working too damned hard on figuring all this out. lol

Ok, despite all of that there were some pretty great scenes in the story. I really loved the connection between Erik and Mina and I thought the author did a great job of portraying their frustration at not being able to take the relationship further. I do wish we could have gotten to know the characters better but it is what it is.

This story, from what I understand in a note from the author before the book started, is that this was part of a Decadent Publishing “Beyond Fairytales” Challenge. McIntyre apparently received Hans Christian Andersen’s String of Pearls and this is the story she came up with. I personally thought the whole premise was well done and made the connections to HCA’s story quite interestingly.

This title is available from Decadent Publishing. You can buy it here or here in e-format. This book was provided by the author in exchange for an honest review.