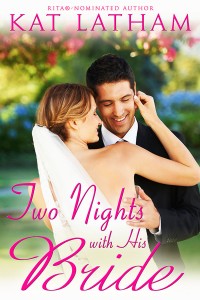 Excerpt from Two Nights with His Bride by Kat Latham—and giveaway!

Hi everyone! waves Thank you so much for joining me here, and thank you to Book Binge for inviting me to share an excerpt of my latest release, Two Nights With His Bride!

This book is Book 6 in a multiauthor series, Montana Born Brides. The other books are by Scarlet Wilson, Dani Collins, Nicole Helm, Maisey Yates and Rachael Johns. The series focuses on women who are involved in a huge Hollywood wedding that’s happening in a small Montana town. There’s a florist, a bridal shop owner, musicians, a baker…and, of course, the celebrity bride.

My book, Two Nights With His Bride, is all about Nancy Parsons, the actress engaged to marry a Hollywood heartthrob—except her trip down the aisle doesn’t go the way she planned. Her bridesmaids plan a girls’ weekend away rafting and camping, and they hire Nancy’s old friend Wyatt, the owner of an outdoor adventure company, to lead their trip. Nancy and Wyatt have a complicated past and, it turns out, an even more complicated future.

This excerpt takes place a few hours after their rafting trip down the Yellowstone River starts. They’re on a lunch break, and it’s the first time in nearly 15 years they’ve spoken. The last time they saw each other, Nancy was 15 and Wyatt was 21—and he pushed her away when she tried to kiss him, telling her it would never happen, not in a million years.

Now she’s going to make him want to eat those words.

Nancy finished her sandwich in record time, yanked the life jacket off and threw it onto the ground before tugging at the zipper of her wetsuit. The one-piece bathing suit he’d given her clung in all the right places, and he silently cursed himself. As a girl, she’d had a haunting beauty, as if she were never completely present. She’d probably been so damn hungry that she’d struggled to focus, but she’d come off as being distant and otherworldly. People always commented on it, calling her ethereal instead of starving.

She’d filled out a little during her years in Hollywood, but she would probably always carry the lean, malnourished-in-childhood look. Fortunately for her, that look seemed to be in for TV actresses. It wasn’t a look he usually went for—he’d always had a thing for curves and dimples, women who looked like they baked the world’s best apple pie and enjoyed eating it smothered with vanilla ice cream.

She’s getting married, you idiot.

Not that he wanted something with her. He was simply fighting the temptation of the forbidden. She was engaged to someone else—and Wyatt never, ever flirted with women in relationships—and the history between them was too complex for anything casual. He knew things about her he doubted she’d told anyone. Plus, she essentially paid his dad’s salary.

None of that mattered, anyway, he thought as the massive rock on her finger caught a ray of sun and blinded him.

She laid her wetsuit on a flat rock and lowered herself onto it, letting out a deep sigh. Seeing her in the bunny costume had made him half hard. Seeing her spread out in the sun finished that job.

He pretended to be busy checking the raft as the others ate, but the pull of her was too hard to ignore. He should probably see how she was doing. After all, she was the bride, and his company had been hired to make her happy. As the others chatted and ate, he sat down next to her on the rock.

“I thought you bride types avoided the sun so you didn’t get weird tan lines.”

She gave him a squinty smile under the shade of her hand. “Shows what you know. I have a skin colorist who can help me even out the tone. Plus I’m wearing SPF eight million.”

“You probably don’t want to know.”

“Definitely not.” Nearly fifteen years of awkward silence piled up between them. He cleared his throat. “So the big day’s in just a couple of weeks, huh?”

“I hear wedding planning can be stressful.”

She snorted. “If I survive this, it’ll be a miracle.” Crunching up, she glanced at Polly and Ruby as if to make sure they were out of earshot. “Those two have been like the twin spawns of Satan. Seriously, planning this rafting trip is the only good thing they’ve done.”

“I thought bridesmaids are supposed to help the bride.”

“Yeah, me too. But they can’t agree on anything. If we don’t find a bridesmaid dress they agree on, I swear I’m going to make them wear these Farmer Jane things. Actually, no, Polly would probably love that. And I can’t make them go naked because Ruby would love that.”

“Not a bad idea. I’ll see if my parents have any extras.” She sat up and crossed her legs. “Okay, you helped me solve that problem. Now what about when the bride and groom have completely different taste in music?”

“I heard Jake Kohl’s singing at your wedding.”

He laughed and shook his head. “I’m not really an autograph collector. I just think it’s pretty amazing how you’ve managed to make this life for yourself.”

She blinked. “Was that a compliment?”

“Yeah, it shocked me, too.” His mouth twisted in a wry smile. “Weirdly, I don’t want to take it back. I guess I must mean it.”

His neck warmed. “That can’t be true.” Surely it couldn’t. He thought nice things about her. He just…shit. He just wasn’t good at getting them from his brain to his mouth.

“Anyway, I don’t know that I made my life this way. It just sort of happened.”

“Please don’t feed me that false modesty bullshit. I’m not some women’s magazine that wants to see a humble version of you. I know where you came from, sweetheart. You didn’t grow up in Hollywood, hobnobbing with agents and producers. You worked hard, and it’s paying off. It’s…admirable.”

He wasn’t the only one, a fact his traitorous body reminded him of as she loosened her mocking grip on her chest. He wanted to rub away any pain she’d inflicted on her smooth skin, maybe move from rubbing to kissing to licking—

“What about you?” she asked, interrupting his fantasy. “I saw that store of yours—and what you charge for this bathing suit. You must be doing okay.”

“Not everything in my store is that expensive. I gave you my top-of-the-line stuff.”

She cocked one of her brows. “Wyatt, I’ve walked down the red carpet in dresses that cost less than this suit.”

“I forgot what a bullshitter you are.”

She grinned and lay back on her towel. Her body stayed tense, though, as if she couldn’t fully relax. They sat in a silence that grew more awkward the longer it stretched. He tried to keep his gaze on her face, but it strayed—subtly, he thought, so subtly she wouldn’t notice.

“Never gonna happen, Wyatt. Not in a million years.”

Buy it at Amazon | Amazon UK | Amazon Can | iBooks | Goodreads

Leave a comment on this post for a chance to win your choice of any of my books! Use the Rafflecopter widget below to enter.

Two Nights With His Bride

Wedding fever has hit the little town of Marietta…

Soap opera star Nancy Parsons is madly in love with Hollywood’s favorite leading man, and they’re getting married on her parents’ stunning horse ranch just outside Marietta, Montana. Actors, athletes, and politicians will be there to watch Hollywood’s most extravagant couple say I do.

There’s just one problem. The bride’s childhood friend Wyatt Wilder knows Nancy’s making the biggest mistake of her life. Sure, Jared’s got looks, money, fame, and—it seems—Nancy’s heart. But when her bridesmaids hire him to lead them on a girls’-only adventure, Wyatt has two nights in the wilderness along the Yellowstone River to show her what a real man looks and acts like. A rugged, tough, loving man.

But will he be able to do it before she says “I do” to the wrong man?

Kat Latham is a California girl who moved to Europe the day after graduating from UCLA, ditching her tank tops for raincoats. She taught English in Prague and worked as an editor in London before she and her British husband moved to the Netherlands. Kat’s other career involves writing and editing for charities, and she’s traveled to Kenya, Ethiopia and India to meet heroic people helping their communities survive disasters. Find out more on her website: katlatham.com.

17 responses to “Excerpt (+ Giveaway): Two Nights with a Bride by Kat Latham”