Set in a futuristic dystopia where society is divided into five factions that each represent a different virtue, teenagers have to decide if they want to stay in their faction or switch to another – for the rest of their lives. Tris Prior makes a choice that surprises everyone. Then Tris and her fellow faction-members have to live through a highly competitive initiation process to live out the choice they have made. They must undergo extreme physical and intense psychological tests, that transform them all. But Tris has a secret that she is Divergent, which means she doesn’t fit into any one group. If anyone knew, it would mean a certain death. As she discovers a growing conflict that threatens to unravel her seemingly peaceful society, this secret might help her save the people she loves… or it might destroy her. Written by anonymous

I was super excited to watch this movie because I finished my read of the book a couple of days before seeing the movie so everything was fresh in my mind.

Did the movie follow everything from the book, exactly? Nope. Did I care? Hell no.

I loved the movie. I thought the changes from the book made sense for the movie. I also thought that the casting for this movie was heaps better than both Hunger Games and Twilight. I’m not going to lie, a whole lot of why I liked the movie had to do with this one: 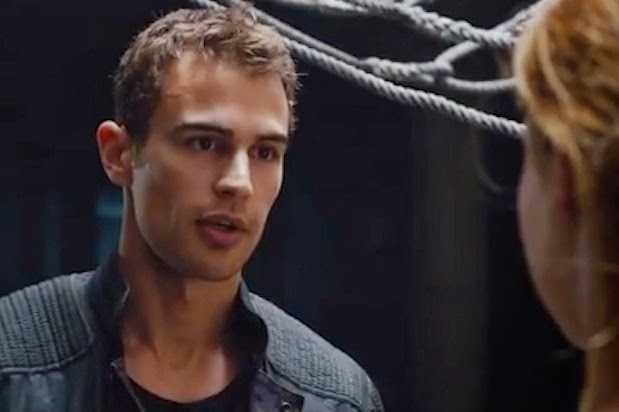 I enjoyed seeing everyone come to life through the movie and though some of my favorite scenes from the book didn’t make it to the movie, it was still a very enjoyable movie. There’s action, there’s an actual story line and guys?!! There’s no love triangle. Woot for that!

So this movie is about Tris’ journey through the Dauntless initiation process. The movie takes place in Dystopian Chicago society. There was a huge war that caused the higher ups to build a wall around Chicago and they divided the society up into five different factions. Abnegation, Amity, Candor, Dauntless and Erudite. Abnegation peeps are selfless, they live to serve others. They’re trusted to run the government. The Amity faction is all about peace. They’re the hippies who do the farming and what not. Candor faction tell the truth. Erudite’s are smart. They’re the brainiacs, the ones who thirst for knowledge. So they’re the teachers, inventors and what not. Dauntless are the protectors. They’re the cops, the military and all of that other stuff. Tris was born into the Abnegation faction and her test results were inconclusive but on her choosing day (when you’re 16, you get tested to show which faction you should choose and then on choosing day, you can either choose the faction you already belong to and tested for or you can make an entirely different choice. It’s up to you), she opts out of Abnegation and goes to Dauntless.

While initiating for Dauntless, you can see the change come over Tris. She goes from selfless weakling to total bad ass. A lot of that had to do with her training from Four. Holy crap was Four amazing. So freaking hawt! I thought both Shailene and Theo portrayed their characters extremely well. Four is exactly how I pictured him, in both looks and character. I pictured Tris as smaller, more frail but Shailene portrayed her character well.

There’s a whole lot more to the movie so you’ll have to watch it to see what I mean. If you liked the book, I’m thinking you’ll like the movie. Even Holly enjoyed it and she’s hard to please so go watch this movie!

This movie is available from Summit and Red Wagon Entertainment. I purchased this DVD and my ticket to movie.