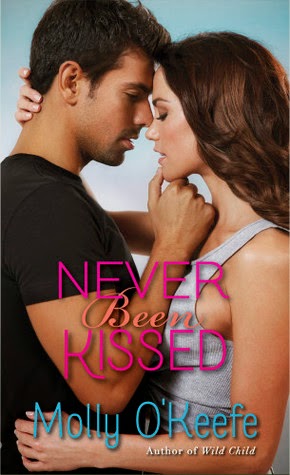 Rowena’s review of Never Been Kissed (Boys of Bishop #2) by Molly O’Keefe.

Perfect for readers of Susan Elizabeth Phillips and Rachel Gibson, Molly O’Keefe’s second novel in her exciting new series—The Boys of Bishop—features an irresistible romance and unforgettable characters in a page-turning story that delivers equal parts emotion and humor . . . with a little edge to boot.

As the daughter of a wealthy politician, Ashley Montgomery has had enough of her parents’ expectations for her future and is going her own way, volunteering to work at a refugee camp in Africa. But her act of charity turns dangerous when she takes a boat trip and is abducted by Somali pirates. Enter Brody Baxter, who was a bodyguard for the Montgomery family ten years ago and doesn’t think twice about coming to Ashley’s rescue. Handsome and tough, Brody has always done what needed to be done. So he swoops in, saves Ashley, and brings her to a place where she can rest and recuperate without the glare of the press and her demanding family: Brody’s small hometown of Bishop, Arkansas. But Ashley soon realizes that she’s not the only one in need of healing.

Holed up with Ashley in a tiny apartment over his brother’s bar in Bishop, Brody is tempted and torn in ways he never anticipated. Beautiful Ashley, vibrant despite her ordeal, fearless enough to love him beyond his wall of self-punishment, is now determined to save him. But with a little faith and a lot of love, they just may find happiness in each others’ arms…

Brody Baxter and Ashley Montgomery have history. Brody used to work for the Montgomery family back when Ashley was 17 and he stopped working for them, the night that Ashley made a move on him. Ten years later, Ashley’s brother Harrison tracks Brody (a Marine turned Bodyguard) down to bring Ashley home. Ashley had been kidnapped by Somali pirates and the Montgomery family paid her ransom so Brody accepts the job of bringing Ashley home safe and sound.

The Montgomery family is heavy into politics. Ashley’s father is the Governor or Senator of Georgia and her brother is on the campaign trail to win him a seat in the Senate or something like that so the news of Ashley being kidnapped by Somali pirates is bound to hit the news and it’s bound to be a big deal. Ashley is not ready to give a press conference to tell her story because she’s been beaten really bad and she doesn’t want to deal with the pressures her political family will put on her so she has Brody take her some place where she can heal and she can lay low until she was ready to come out and deal with her life again.

Brody takes her to the only home that he’s known in his life. He takes her home to Bishop, Arkansas. He takes her back to the town where he grew up after his parents died and he was adopted into a new family. Ever since his adopted Mom died, things with his father and his brother have been strained. He comes and goes but he never stays long enough to form attachments, even though he’s attached to both his adopted father Ed and his brother, Sean.

As long as Ashley is in Bishop, Brody is sticking close because she’s under his protection and because there’s a sizzle in the air when he’s near her and he can’t help himself. Ashley has never forgotten Brody but then, how can she forget the guy she got fired? The chemistry between the two of them is still there and she’s still just as hot for Brody now as she was back then.  And so is he.

I liked this book. It had solid characters, a great story line but it was really slow to pick up for me. That beginning hump took me a while to get through but once I was over it, the story kept me interested. Brody and Ashley were interesting characters. Brody was the alpha hero who has family issues and Ashley was the do gooder with the big heart. They were perfect for each other.

Usually in romance novels, I’m a lot harder on the heroines than I am on the heroes but in this book, Brody drove me nuts. His thought processes toward his family, toward Ashley made me want to smack him around some but in the end, I was glad that he didn’t fight his feelings for too long.

I really liked the secondary romance between Sean and Cora. They were too cute and had me laughing with their bickering than sexy times. I liked that Sean loved Brody and finally let him have it when he was through with Brody being a bonehead.

O’Keefe created a wonderful small town of people that were interesting enough to keep me invested in what was happening in this story though it took me a while to get there and even though Brody drove me up the wall, I’m looking forward to reading the next book.

Check out a preview of the book:

This book is available from Bantam. You can purchase it here or here in e-format. This book was provided by the publisher in exchange for an honest review.