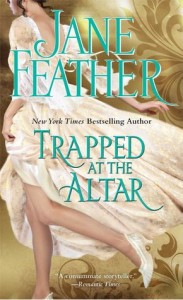 Rowena’s review of Trapped at the Altar by Jane Feather.

Torn between a true love and family duty…

Ariadne “Ari” Carfax has never been one to play by the rules; she’s an heiress to the Carfax family, banished from London when Oliver Cromwell seized the throne from King Charles, who has since gained notoriety for pillaging, thieving, and ruling the Carfax Valley with an iron glove. All too soon, Ari finds herself in her family’s legendary vise, forced into a marriage to Ivor Chalfont, Ari’s childhood friend and confidante, against her wishes.

While the Carfax family has only its own interest at heart—a union between the Catholic Carfaxes and Protestant Chalfonts will guarantee the Carfaxes’ reinstatement at London court, and the rehabilitation of their noble name—Ari cannot bear the thought of being separated from her secret lover/poet, Gabriel. She vows to fight her family—and Ivor—every step of the way, even when forced into the marital ceremony at her own grandfather’s wake, in a treacherous coup de etat that leaves her wed to another, and eternally broken-hearted.

Sending Gabriel to the temporary safety of Lord Monmouth’s outpost at The Hague in Scotland, Ari resigns herself to her new life as Lady Ivor Chalfont—at least until the newlyweds travel to London, and she can escape her new husband and reunite with Gabriel. As the two make their preparations to travel, however, Ari finds herself entertaining entirely uncharacteristic thoughts about her new husband: she finds that she likes him as perhaps more than a friend, after all. Not wanting to be disloyal to Gabriel, but simultaneously more and more attracted to Ivor, Ari can’t help but give into the physical pull between her and her new husband, and the two embark on a tentative, post-marital courtship that just might hold the seeds of love…until, that is, Gabriel spots Ari in London and makes it his mission to get her back. Ari is caught between a lover who might be better left in the past, and a husband who she just might be able to love; who will win Ari’s heart?

Set in 1600s England during the tumultuous Monmouth Rebellion, this is the epic story of what happens when the one thing we think we can trust—our hearts—turns out to be the most duplicitous.

Let me start this review by saying that I’ve never read anything by Jane Feather before and while I did end up liking the story, it was really slow going for me. The beginning of the book dragged and there were times when I wanted to put the book down and that had a lot to do with the heroine, Ari.

She was used to getting what she wanted and after she marries Ivor and wants to keep her relationship going with Gabriel (her lover) AFTER the marriage. I’m all about strong heroines who know their mind and go after what they want but in Ari’s case, it got on my nerves. She got on my nerves. I mean, her and Ivor were friends before they got married and she treated him like shit like that friendship didn’t mean anything to her and I thought that Ivor was a whole lot more patient with her than I would have been. I just don’t think that you do shady shit like Ari did TO YOUR FRIENDS. And they were friends, make no mistake about that. Her devotion to Gabriel really pissed me off throughout most of the book that she started to sour my enjoyment of the book.

Ivor isn’t the most perfect of heroes but I liked him. I liked that he was strong and he was fair and he did want to do right by Ari and yes, there were times when I wanted to smack him upside the head but for the most part, I liked him.

There are a lot of things that happen in this book and the story really took its time developing so while I’m glad that I finished the book, I struggled with the reading of this one. Ari wasn’t a likable character and even in the end, when all is well, I still didn’t really care for her. Her redemption was still a tad bit short for me but reading this book almost felt like a chess match. The pieces were being moved, strategies were being laid out and the game moved at a slow pace but when everything starts falling into place, I was too mad at Ari and frustrated with Ivor and still annoyed that Gabriel was still in the mix that while it ended the way that it was supposed to end (happily, just the way that I like it), I was still mad. When I don’t like one of the main characters in the book, I struggle with the story itself. Yes, I know that perfect characters are boring and seeing a person redeemed is so much more interesting but for me, Ari wasn’t really redeemed. I just couldn’t get past a lot of the shady shit she was doing behind Ivor’s back.

I will say this though, Jane Feather wrote an interesting story that was slow to come together but in the end, it was a solid story. I will definitely be reading more from this author.

This book is available from Simon & Schuster. You can purchase it here and here in e-format. This book was provided by the publisher in exchange for an honest review.