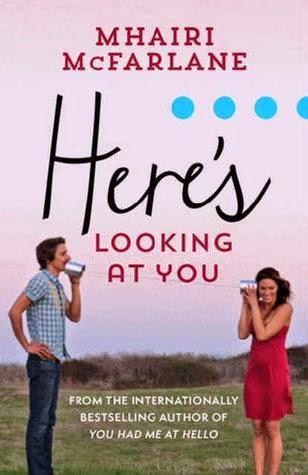 Rowena’s review of Here’s Looking at You by Mhairi McFarlane.

Here’s Looking At You is, in essence, an ugly duckling tale. Our heroine Anna returns to school after fifteen years for a reunion. School doesn’t hold happy memories for her, as being a roly poly Italian (known as the Italian Galleon), and always armed with a Tupperware full of pungent Mediterranean food, she was bullied incessantly throughout her years there.

Now in her 30s, Anna wants to put the past behind her once and for all and face up to the bullies who made her life hell. But she is much-changed from the girl she once was – all curves and because I’m worth it hair – and no one recognizes her when she arrives. Losing her cool, she backs out on her plan for revenge and slinks off, hoping never to be reminded of her years at school again.

But fate gets in the way, and after the reunion her path keeps crossing with James – major hunk and Anna’s major crush back at school. But alas, as a crony to the bullies, Anna to this day believes that his beautiful exterior hides an ugly interior. As they continue to cross paths a love/hate relationship ensues until eventually something shifts, and they both start to discover what the person underneath is really like…

Full of laugh out loud humor, Here’s Looking At You is a novel about facing your demons and being happy with who you really are.

There was something charming about this book that totally sucked me right in and while it wasn’t the most perfect of reads, I still enjoyed it quite a bit.

Anna didn’t have a good time of it back in high school.  She was overweight and one of the worst things that can happen to a girl, happened to her and all these years later, she still hasn’t gotten over it.  She was bullied and the most popular boy in school, the guy she had a huge crush on (of course) embarrassed her in front of everyone.  So when her class reunion creeps up on her, she doesn’t make plans to attend but at the insistence of her friends, she decides to go.  She looks completely different from her high school days and who doesn’t want to show up at your high school reunion and flip the bird to everyone who made you feel like shit all those years ago?

When she sees James Fraser again, she’s only a little bit annoyed that he didn’t grow up to be a fat, balding old man.  He’s even hotter than he was back then, more manly, more filled out and all over sexy.  But when he doesn’t recognize her and his best friend tries to put a move on her, she’s out of there.  She’s ready to finally move on from her life but that doesn’t happen to her because James Fraser keeps showing up when she least expects him to.

They begin working together on a project for work.  She’s a history lecturer who is helping with the development of an app that will bring history to the world.  James is the one that is going to be building the app.  This is where they start to mix company.  They’re forced to work together and at first, Anna hates him. She has every right to hate him as well because she knows exactly who he is and what he did to her back in high school.  For James, at first he wasn’t a fan of hers because she was so mean to him.  But as they continue to work on the app, they both start to enjoy each other’s company and Anna starts to realize that he’s not the same guy that he was back in high school. Watching these two grow closer and closer made an interesting story.

The story line follows the same pattern as other romances and while that should have made this book seem like more of the same, I thought McFarlane did a great job of making this story refreshing and completely charming.  James and Anna have a long way to go in getting to their happy ending and McFarlane does a great job of putting them through the wringer in order to get to that happy ending.  And she did it in a way that came off as real.  Both James and Anna handled their issues in a realistic way which made it easy to connect with them.  When James finds out just who Anna really is, the way he handled it made me see red and I almost stopped reading it right there but I’m glad that I forced myself to finish because for me, he makes up for that blunder and while he still had a long way to making up for his part in Anna’s humiliation at school, by the end of the book, I had every faith that James would do anything in his power for the rest of his life, trying to make it up to Anna.

This isn’t an easy book to read and I can see why a lot of people wouldn’t want to finish this book or would get frustrated with the story but I’m glad that I stuck with it and I really came to love all of the characters in this book.  I will say that this book may not be for everyone but for me? It worked.