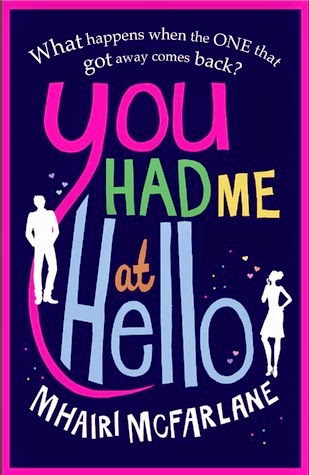 Rowena’s review of You Had Me at Hello by Mhairi McFarlane.

What happens when the one that got away comes back?

Rachel and Ben. Ben and Rachel. It was them against the world. Until it all fell apart.

It’s been a decade since they last spoke, but when Rachel bumps into Ben one rainy day, the years melt away.

From the moment they met they’d been a gang of two; partners in crime and the best of friends. But life has moved on. Ben is married. Rachel is definitely not. In fact, the men in her life make her want to take holy orders…

Yet in that split second, Rachel feels the old friendship return. And along with it, the broken heart she’s never been able to mend.

If you love David Nicholls and Lisa Jewell then this is the book for you. Hilarious, heartbreaking and everything in between, you’ll be hooked from their first ‘hello’.

This was a cute story.  A story about two people who were close and then lost contact with each other and then meet up again years later.  They’re at different places in their lives now and in a lot of ways, they’re different people from who they were when they knew each other but the connection that was clear then is coming up again and Rachel, she never really got over Ben.  Or the way that their relationship ended.

Rachel just broke up with her fiance’ and she’s hanging out with her best friends when Caroline brings up Rachel’s blast from the past, her university best guy friend, Ben.  Curious, Rachel heads over to the library where Caroline said she saw Ben and is hoping that she’ll bump into Ben.

Ben is a lawyer.  A married lawyer.

Their friendship starts up again and it is more than apparent that whatever feelings these two had for each other isn’t still in the past because their connection was a real one and that kind of connection lasts.  I really enjoyed getting to know both Rachel and Ben through their story.  I also really liked getting to know Rachel’s friends.  I adored Caroline (even when she was being an annoying know-it-all), Mindy and Ivor.  I adored the support system they were for Rachel and I really enjoyed their additions to the story.  All likable characters.

Ben was a great hero, not a perfect hero but a likable one that I adored anyway.  I loved the bits from the past and even the present that we got of Ben and Rachel.  Their relationship was adorable then as it was now and I really enjoyed being a part of it.  This is my first Mhairi McFarLane and it won’t be my last.  McFarlane wrote a great story about two friends that fall in love and she did it in a way that was enjoyable.  I definitely recommend.

2 responses to “Review: You Had Me at Hello by Mhairi McFarlane”