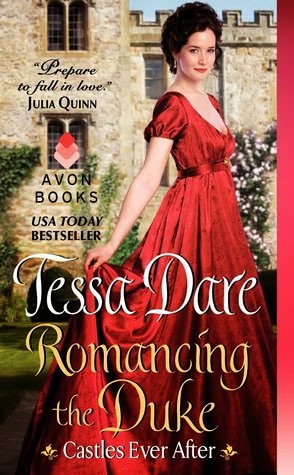 Rowena’s review of Romancing the Duke (Castles Ever After #1) by Tessa Dare.

In the first in Tessa Dare’s captivating Castles Ever After series, a mysterious fortress is the setting for an unlikely love . . .

As the daughter of a famed author, Isolde Ophelia Goodnight grew up on tales of brave knights and fair maidens. She never doubted romance would be in her future, too. The storybooks offered endless possibilities.

And as she grew older, Izzy crossed them off. One by one by one.

Now Izzy’s given up yearning for romance. She’ll settle for a roof over her head. What fairy tales are left over for an impoverished twenty-six year-old woman who’s never even been kissed?

This book was another fantabulous addition to Tessa Dare’s back list.  It entertained, the romance was steamy and the characters were memorable.  There isn’t much more that you can ask for in a romance.  Dare delivered a wonderfully romantic story that reminded me why I started reading in the first place.  Not too long ago, Holly and I were talking about how we missed the old school romances that ate us up with emotions.  The ones that were full of angst and gutted us with goodness.  Dare captured all of my favorite things in this book and I couldn’t be happier.

Isolde Ophelia Goodnight grew up with a famous writer as a father.  Her father wrote fairy tale stories that starred Isolde herself and Isolde is a celebrity because of it all.  It was funny to see a historical celebrity who had a fan club.  People who geeked out over books like we do.  But Isolde’s father is dead and everything that she once had, now belongs to a spiteful and hurtful cousin who threw Isolde out on her butt.  She’s got nothing left in this world.  No home, no food and yet, when she gets mail from an old friend of her father’s that speaks of an inheritance, Isolde heads over to this castle and finds out that she’s inherited the castle.  The whole thing.

The problem is, the castle she inherited is already occupied by someone who claims to be the owner.  And that owner is tall, dark and completely scary.  But with nothing to lose, Izzy isn’t going to be run out of her inheritance.  She’s staying and she’s going to build herself a home and a life.

Ransom, The Duke of Rothbury is the rightful owner of the castle and he’s living in it.  He’s also not in the mood or the right frame of mind to deal with others right now so he’d like to be left alone but this lovely distraction refuses to go away.

Over the course of the book, Ransom softens toward Isolde and Isolde proves to be addicting to Ransom.  Their romance made me laugh and it made me sigh.  Ransom turned out to be quite the hero for Isolde and I adored reading this entire book.  Tessa Dare writes the kind of historicals that stay with you long after you’ve finished the book and this was one of those books.  This book is proof of my adoration of all things Tessa Dare.  She won me over with her Spindle Cove series and I have every faith that this is going to be another fabulous series.  I’m already looking forward to more so I’m hoping that we won’t have too much of a wait.

Read this book, you won’t be sorry!

2 responses to “Review: Romancing the Duke by Tessa Dare”