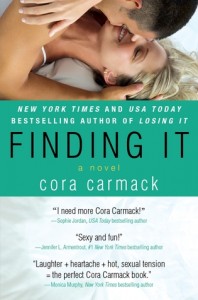 Rowena’s review of Finding It (Losing It #3) by Cora Carmack.

Most girls would kill to spend months traveling around Europe after college graduation with no responsibility, no parents, and no-limit credit cards. Kelsey Summers is no exception. She’s having the time of her life . . . or that’s what she keeps telling herself.

It’s a lonely business trying to find out who you are, especially when you’re afraid you won’t like what you discover. No amount of drinking or dancing can chase away Kelsey’s loneliness, but maybe Jackson Hunt can. After a few chance meetings, he convinces her to take a journey of adventure instead of alcohol. With each new city and experience, Kelsey’s mind becomes a little clearer and her heart a little less hers. Jackson helps her unravel her own dreams and desires. But the more she learns about herself, the more Kelsey realizes how little she knows about Jackson.

Cora Carmack has won me over with her first two books, Losing It and Faking It. She also cemented my love of her work with her novella, Keeping Her. I have enjoyed everything that she came out with and I didn’t think that would change with this book.

Finding It follows Bliss and Cade’s friend Kelsey as she backpacks abroad, trying to find herself. What they don’t know is that Kelsey is trying to fill a void in her life, a void that was made when she was younger and turned to the two people that were supposed to help her…and didn’t. Now, she’s grown and she is living her life, partying in a new European city each week and even though she should be having the time of her life, she can’t help but feel lonely.

Things start to turn around when she meets Jackson Hunt. Jackson invites her to join him for a week of adventure and in my opinion, against her better judgment, Kelsey agrees.

Now, I say against her better judgment because the night before she agrees to go on this trip with Jackson, Kelsey was drugged and the last memory she has of that night was of being with Jackson. Now, she doesn’t know Hunt. They just started seeing each other around as they were partying at the same places but on the night that she was drugged….she was with Jackson. Now if that happened in real life to my friend, there’d be no way in hell I’d let my friend go off with the guy she was with WHEN SHE WAS DRUGGED! Yeah, I know that Hunt wasn’t the one that drugged her but still…she didn’t know him.

Anyway, so Hunt whisks Kelsey away for a week of adventure and it is while she’s on this trip that Kelsey is finally starting to find out who she really is and what she was missing in her life. So, alls well that ends well but as far as my enjoyment of the book, it was tampered only by the fact that I knew what was going to happen before it happened. There wasn’t much of a mystery there but in the end, I didn’t even give a damn. I liked Kelsey (which was saying something since she was a brat for most of the book) and I really liked the person that she grew to be throughout this book.

I liked Hunt too because he was sexy and when things thawed between him and Kelsey, they were pretty hot. They were hot together and I enjoyed that part of the book but I wasn’t a fan of the secrets and the way that the secrets came out and then the grand gesture at the end was a bit excessive for me but if someone I was madly in love with did that for me, I’d probably be impressed.

So while this book isn’t my favorite book by Carmack, I still enjoyed it. I really came to like it in the end and Kelsey’s character had a lot to do with that. I enjoyed seeing the growth in her character and seeing her become that strong individual at the end made the entire book satisfying. Made it worth reading. So yeah, I recommend this book.

This book is available from William Morrow Paperbacks. You can purchase it here or here in e-format. This book was provided by the publisher in exchange for an honest review.