Last year at RWA (2012) after the literacy signing, I sat down with Lynn and Blythe from AAR, Renee from Renee’s Book Addiction and author Jill Sorenson. We talked about many things, but one of our main topics was the STGrB site and what we can do to stop them. Sadly, there isn’t a lot. Because they’ve taken down the massive amounts of personal information they originally posted, things are sticky.

I suggested at the time we ignore them. Taking away their audience means taking away their power. Rowena said then that wasn’t going to work. They’d found a voice and they weren’t going away.  Obviously, since they’re still here a year later, that was definitely the case.

Last week, Goodreads broke my trust by deleting user reviews without notice, citing a “change in policy” as the reason and touting the line that they would no longer tolerate reviews of “authors” but only of the books they write. This, as you can imagine, set off the book reading community. Many users felt as I did, and decided to take their book reviews, shelves and ratings and go elsewhere. The most popular place to migrate seemed to be Booklikes.com. I’m not a huge fan of the Tumblr-like layout of BL, but I’m reserving judgement for now, since the site is still in its infancy. I’m sure it will grown and change, just as GR did. (GR Update: Goodreads never did make an official announcement about this review change on their main page or in their newsletter, but they do have a FAQ About Reviews and Shelves up on the site now explaining their new policy. IMO, they handled the whole thing poorly, and this FAQ doesn’t make me feel any better.)

Though STGrB stands for Stop the Goodreads Bullies, the site owners aren’t content to keep their hate and discontent focused on just that site. As soon as they realized they were losing a lot of their targets because GR deleted reviews, they started to make waves elsewhere. The first place? Booklikes.com.

Last week, I tweeted a screencap Rowena sent me of a quote from Booklikes.com owner that showed up on the STGrB website. Seeing his response there really disheartened me. I thought BL might be an acceptable substitute for GR, but I refuse to associate with anyone who supports or is linked to STGrB.

Over the course of the next few days, it came to light that Booklikes had no idea what the STGrB website was all about, or how it got its start. Which means they aren’t associated with them, which is all to the good. As a matter of fact, when the nature and terrible start of the site was shared with him, Dawid Paiskow, CEO and co-Founder of Booklikes.com, was horrified.

What I realized, upon seeing his reaction, is that ignoring them isn’t the way to go. The only way to combat a site like STGrB is to continually remind the community how they got their start, and why they aren’t a site anyone wants to associate with.

For those of you who aren’t aware, the STGrB site popped up last year in response to what the writers at the site claimed were reviewers bullying authors at Goodreads. To be honest, I have no idea if there actually were/are reviewers at Goodreads who bully authors. I’ve never seen any evidence of it, but that doesn’t mean it doesn’ t happen. What I do know is that any credibility the site had was lost when they decided to combat the “bullying” by being bullies themselves.

Some of their first posts were profiles of who they considered to be the biggest bully reviewers. These profiles included the real names, addresses, kids names and places they liked to frequent of the reviewers in question. As you can see in this post at Gossamer Obsessions, STGrB went way too far in their zealous need to “stop the bullies”. 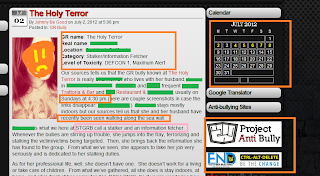 Her personal information has been obscured, but it’s still perfectly clear how much they posted about her (such as her name, her husband’s name, her favourite restaurant, and where she can be found at certain times of day) for everyone to read. The orange squares highlight pertinent phrases and evidence of the post’s date. The pink square indicates irony.

That screenshot was taken from their site in July 2012, as you can see by the calendar right there on their sidebar. You also know it’s from the early days of their site, because they still have buttons from anti-bullying organizations on the sidebar, something they were asked to remove when it became clear their intent was harm rather than education.

STGrB eventually took down the damning information (though screenshots and the internet are forever), but they continue to defame and harass those they consider “bullies”.  I haven’t visited the site since it first went up, because I don’t want to give them more traffic, but I’ve seen screenshots and posts they’ve written. It sickens me that a site with that kind of background would be given legitimacy by sites like HuffingtonPost or authors like Nathan Bransford.

For further information, you can visit stopthegrbullies.net:

This site has been set up to provide truthful information about the actual aims and operations of the so-called ‘anti-bully’ website, stopthegrbullies.com.

I would encourage all of you to share this information with your readers, friends, family members, social media followers, etc. The evidence against the STGrB website is too overwhelming to ingore. They aren’t an anti-bully website. It’s important they not be given any more legitimacy.