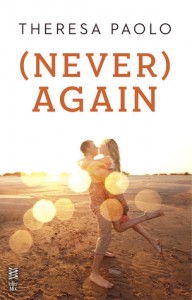 Just when she had finally moved on…
…He moved back.

When college freshman Liz Wagner hears her ex’s voice for the first time since he moved clear across the freaking country, she does what any respectable girl would do: Dive into the girls’ bathroom.

Zach Roberts—the Zach Roberts—is back. And he’s everywhere Liz looks—infiltrating her friend group, buddy-buddy with her brother. It’s enough to ruin college altogether. But what choice does she have but to put on a happy face and pretend he didn’t leave her vulnerable and alone in a pile of emotional wreckage?

Pretending works, until tragedy strikes and the only person available for comfort is the one person she wants to stay away from. When Zach turns out not to be the jerk she convinced herself he was, but the boy she used to love, Liz needs to decide whether to open her heart again to the boy who tore it out.

Liz Wagner is having a great freshman year. She’s got great friends and a great boyfriend and all is well – until she sees her old boyfriend standing in the hall near one of her classes and realizes that he’s a student at the same school.

You see Liz and Zach had been incredibly in love and inseparable during their junior year of high school. Then Zach’s dad took a job transfer and he ended up moving across country. Liz was devastated but dealt with it all in her own way. She was managing until Zach stopped calling and she never heard from him again. She eventually found out that Zach was still in contact with her brother but that didn’t mend her broken heart.

So it’s been over a year and Liz thinks she’s way over Zach and tries to deal with having him back in her life but everywhere she turns, there he is. She doesn’t want to be jealous of the girls showing him attention but she soon realizes it’s because she’s still in love with him. Of course where does that leave the boyfriend, Joe, that she supposedly loves and is about to give her virginity to?

This is the story of two kids who were once in love and have reunited – not necessarily in a good way. I had some mixed feelings about the whole book and while I really liked parts of it, others just kind of left me cold.
I think the major part of the problem was that I really didn’t connect with either Liz or Zach on a deep level. The story was told in first person from Liz’s point of view and I frankly got tired of her really fast. I wanted Zach’s thoughts in there as well and Liz just seemed so very whiney and immature that it was hard to like her. The other major issue was the depth of the love between Liz and Zach that they supposedly had. Maybe I’m just cynical and don’t think that 16 year olds know whether they’re in love for a lifetime or not. I just don’t see that intensity happening in high school. Sex? Yes. Abiding love? Not so much.

The one part of the story that I really liked was Zach. Now, granted, I saw him strictly through Liz’s eyes but I thought that guy was smart, funny, had his head on straight and didn’t let his peers run his life. His major flaw, IMHO, was that he wanted Liz. I know, ouch. Sorry, but that’s just my opinion.

In the end I thought this was a “good” read. Not great, not horrible but good.

This title is available from InterMix.  You can buy it here or here in e-format.  This book was provided by the publisher in exchange for an honest review.