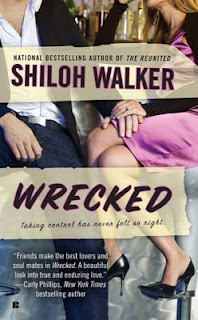 In the nineties, Abigale Applegate and Zach Barnes were the most beloved sitcom child stars in the world. Then they grew up and left Hollywood behind…

Whatever happened to Abigale Applegate?

She’s been wondering the same thing.

With her Hollywood dreams long gone, Abigale now has a nice, neat, uncomplicated life—until the day her perfect fiancé needs to talk. Dumped, a little more than shattered, and totally confused, Abigale turns to Zach, her best friend since forever, to help her pick up the pieces. He does it with a gift—a copy of Wreck This Journal. She can vent her frustrations, and sketch out a new plan. Zach just hopes he’s part of it. Because he’s been in love with Abigale his entire life.

When the journal falls into Zach’s hands, he discovers Abigale wants a new man. And fast. Nothing more than a hot distraction. Zach has a strategy, too. He’s going to be that man. It’s his last chance. Abigale might be out to shake up her life, but Zach’s out to reinvent it. Now, all he has to do is convince Abigale that life can go as planned.

When I first heard about this book, I knew I wanted to get my hands on it ASAP.  And my anticipation was definitely rewarded.  I really enjoyed Wrecked.

First is the whole friends to lovers thing. I love it! Zach and Abigale became friends when they both starred in a comedy sitcom as teenagers. This is also when Zach fell in love with Abigale, something he thought he would outgrow, but nope, never happened. Wrecked is about how Abigale falls in love with Zach, and it all begins with that journal he buys her because as her best friend, Zach knows Abigale writes lists compulsively.

Second is sexual chemistry. Wowzers! It begins with tension, sexual tension. When the blinkers come off Abigale’s eyes and she sees what’s right in front of her, but she has to pretend his sexiness is not right there because if things went bad it would ruin their friendship! (sidenote: Why do heroines imagine the end before the beginning has even begun?) Then there’s the inevitable giving into the lustful urges. And oh my do they have some built up urges! I loved how spicy hot they were together. It was extra good because they already loved each other.

Third is the friendship. At the heart of this tale is how close Zach and Abigale are. That’s what makes friend to lovers plots so satisfying. There’s already a bond and the falling in love makes it stronger. *sigh* I loved their friendship.

But Wrecked was not without some issues. I was kind of tired of all the secret crushes. Zach loved Abigale, someone loved Zach and then that someone had someone loving them. Enough already! LOL And part of the conflict at the end stems from Abigale catching that first someone making the moves on Zach and her freaking out over it. I honestly felt that that part was overdone, just a wee bit. But these were minor issues.

I really enjoyed Zach and Abigale’s story and I highly recommend it. 4.25 out of 5.