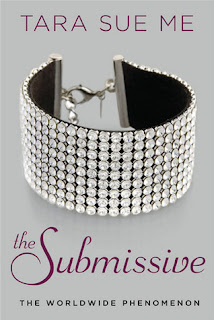 Judith’s review of The Submissive by Tara Sue Me

Abby King has a secret fantasy.

New York knows Nathaniel West as the brilliant and handsome CEO of West Industries, but Abby knows he’s more: a sexy and skilled dominant who is looking for a new submissive. Yearning to experience a world of pleasure beyond her simple life as a librarian, Abby offers herself to Nathaniel, to fulfill her most hidden desires.

After only one weekend with the Master, Abby knows she needs more, and fully submits to Nathaniel’s terms. But despite the pleasure he takes in Abby’s willing spirit, the Nathaniel hidden behind the rules remains cold and distant.

As Abby falls deeper into his tantalizing world of power and passion, she fears that Nathaniel’s heart may be beyond her reach—and that her own might be beyond saving.

I have read a number of reviews of this book and it is no secret that they range from shocked and negative to raves for a story well-told.  I did not read this work when it was first published on the internet in episode form but recently came across it at Amazon.com.  And I have to own up to a fascination with the various versions of the BDSM “lifestyle” that is presented in what is now becoming a very popular literary genre within the romance fiction world.  I also own up to not really understanding what drives people to seek out dominant or submissive postures for themselves, that find release within a world of pain and pleasure or who find that such experiences are necessary for their overall well-being.
That being said, I also own up to a never-ending fascination with what makes people tick.  I have worked very hard to be the kind of person who is willing to accept people for who they are, to allow people to be authentic within their own comfort zones or needs.  I refuse to accept abuse or destructive actions within any kind of lifestyle.  But for many, the “safe, sane, and consensual” mantra has been a guard against the damage that true abuse of body and soul often perpetrated by individuals who are looking for a venue where they can express abusive hatred for others of both genders.  There is no doubt that the BDSM community accepts persons who are shirked and denigrated by society, who find caring and nurture of a very different kind that many would see as positive, yet they flourish and function in professions and the wider society very successfully.  It has to be obvious why confidentiality is a cherished tenet of this community.
All in all, I don’t think this story is simply about the BDSM exchange that is the upfront context.  It is also about the deeper needs that both Abby and Nathaniel are seeking to avoid.  I think many in the BDSM community are trying very hard to have significant interaction with other persons while avoiding the messiness of true relationship.  The friendships are deep and vibrant, but lovers come and go under the rubric of “sub” and “Dom” while avoiding the push/pull of being deeply emotionally involved with a significant other.  This is obviously not true of everyone.  Many monogamous married couples have built long-term relationships around the D/s power exchange, but in the case of these two main characters, both want the vibrance of real interaction but still reserve importance parts of themselves as self-protective measures.
This story is well written and has certainly struck a receptive note for many readers.  For others it has been disgusting and shocking, but I would venture to say that most BDSM based stories would draw the same response from readers for whom the matter of power exchange continues to be a troubling thing.  It is an alien concept in a world that is burdened with societies where people are subjugated and oppressed and it is terribly difficult to understand why anyone would seek to be overwhelmed by the wants and desires of another.  But here again is that issue of allowing people to live out their inner selves in a way that enables them to experience the true freedom to “be.”  I don’t understand it and it isn’t who I am, but for many it is as necessary as breathing.  Here in America it comes under the heading of “. . . the pursuit of happiness” and I, for one, refuse to take that freedom away from anyone, no matter how alien ti may be to who I am.
This author has carefully crafted a story that lays out what power exchange is, how it plays out in Abby and Nathaniel’s experience, how both were brought to a place of facing themselves in such a way that they were each forced to make some critical choices about what it meant to be authentically human.    It is not necessarily an easy story to read and each chapter carries the reader forward as the tension between these two people escalates.  Their inner monologues are helpful in revealing the inner struggles both endure as they keep trying to remain emotionally uninvolved.  It is curious that there are evidences that the greater struggle is Nathaniel’s.  There are BDSM based stories that are obviously attempts at sensationalism while others like this story seem to want to introduce the “vanilla” world to an authentic D/s exchange.  I think this author has done well.

This book is available from NAL. You can buy it here or here in e-format. This book was provided by the publisher for an honest review.