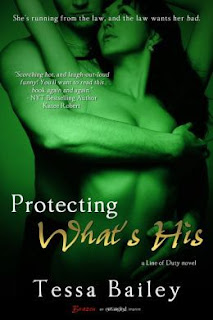 Ames’ review of Protecting What’s His by Tessa Bailey.

She’s running from the law, and the law wants her bad.

The opportunity was just too damn delicious for Ginger Peet to pass up. The purse full of money she finds—$50,000 to be exact—could give her and her teen sister the new start they need. So she grabs the cash, her gothy sibling, and their life-sized statue of Dolly Parton, and blows outta Nashville in a cloud of dust. Chicago, here we come…

Turns out, Chicago has some pretty hot cops. Hot, intense, naughty-lookin’ cops like Derek Tyler, who looks like he could eat a girl up and leave her begging for more. And more. Tempting as he is, getting involved with the sexy homicide lieutenant next door poses a teensy problem for a gal who’s on the lam. But one thing is certain—Derek’s onto her, and he wants more than just a taste.

And as far as he’s concerned, possession is nine-tenths of the law.

I liked Protecting What’s His despite a few problems. The heroine, Ginger, is fed up with her old life in Nashville. Her mother is an addict and she’s been taking care of her younger sister forever. She’s the one who makes sure there’s food on the table. And when she sees the wad of cash in her mom’s purse, she thinks about how that can provide a new life for her and Willa, her sister. So she grabs the cash and heads to Chicago. She finds a nice apartment that would have been out of there budget otherwise and has a run-in right away with her neighbor.

Derek Tyler is hungover and heading to a funeral for a fallen cop. He’s definitely not in a receptive mood to some loud girls moving in next door. So his first impression? Not the greatest. Derek and Ginger butt heads immediately. But there’s a heavy dose of attraction thrown into that mix that heats things up quickly. The more Derek gets to know Ginger, the more he wants her. And he realizes pretty quickly that she’s not like any woman he’s known before and that he’s definitely rusty on the relationship stuff. For her part, Ginger wants Derek but because of how her mother was when it came to relationships, she has a very real fear of ending up like her and she doesn’t really trust herself enough to go for it.

I liked that Ginger’s fear of commitment had a solid basis. Her mother is definitely a screw up and Ginger doesn’t want to end up that way. She wants to provide a safe and supportive environment for Willa to finish growing up in – a far cry from the first 17 years of Willa’s life. But Derek gets in through that armor around her heart, something she denies.

And Derek. He was never interested in relationships in the past, but Ginger changes that for him. And he’s a strong alpha hero. As a cop (lieutenant in fact) he has the possessive, take charge streak a mile wide. Which was hot. As much as he tried to take over Ginger’s life, she gave him attitude and definitely kept him on his toes. That balance is important – Ginger is no dishrag. She’s got a spine of steel and she’s not afraid of Derek seeing it. I really liked the dynamic between them. Derek isn’t perfect though – he definitely makes his mistakes, but he’s new to the relationship game. And the sex? Hot stuff! LOL

My issues were somewhat minor. The length felt too short. So that kind of rushed things. Like I felt they fell for each other a bit fast. Despite that I don’t doubt that they did fall in love. And there’s a pretty pointless scene with a woman from Derek’s past. Other than that, I enjoyed this book. 4 out of 5.

This book is available from Entangled Publishing. You can buy it in e-format here or here.