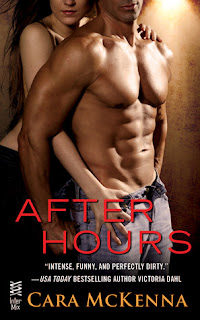 Ames’ review of After Hours by Cara McKenna.

A dangerous infatuation with a rough and ready man…

Erin Coffey has been a nurse for years, but nothing’s prepared her for the physical and emotional demands of her new position. Needing to move closer to her dysfunctional family, she takes a dangerous job at Larkhaven Psychiatric Hospital, where she quickly learns that she needs protection—and she meets the strong, over-confident coworker who’s more than willing to provide it.

Kelly Robak is the type of guy that Erin has sworn she’d never get involved with. She’s seen firsthand, via her mess of a sister, what chaos guys like him can bring into a woman’s life. But she finds herself drawn to him anyway, even when he shows up at her door, not eager to take no for an answer.

What Erin finds even more shocking than Kelly’s indecent proposal is how much she enjoys submitting to his every command. But he can’t play the tough guy indefinitely. If they want to have more than just an affair, both will have to open up and reveal what they truly need.

I saw a lot of positive buzz for this book around blogland and it caught my eye, that cover is hot! And After Hours definitely lived up to the buzz.

Erin Coffey is an LPN who’s only patient so far was her elderly grandmother. Now that her grandmother has passed, Erin needs a job that’s close to her sister and nephew. That job is at Larkhaven, a psychiatric hospital. On her first day, Erin meets Kelly, whom she mistakes as a patient at first. He’s a big bruiser of a man with scars and a buzz cut. But Kelly is an orderly. With his size, he’s able to help the doctors and nurses with the more recalcitrant patients. Erin is intrigued by him but she sees in him the kind of guys her sister and mother would fall for – not good.

But the more Erin gets to know him, the more she wants him. Even thinking he wouldn’t be good for her, she is tempted. And Kelly would tempt anyone. He’s a big guy who tells it like it is but he doesn’t do it in a cruel way. I’m not going to say he’s sensitive, but he has a good grasp on situations, which is a good thing in his line of work. And he wants Erin, and he lets her know it, in explicit terms. At first Erin is turned off by his straightforward attitude, but when he tells her he wants to screw her nine ways to Sunday and do it his way, Erin eventually gives in. She is tired of the burdens she carries (she rescues her sister frequently from a douchebag ex) and she just wants to not worry about things for a while and be selfish. And Kelly gives her that. In a good way.

But Erin isn’t done making assumptions about Kelly, despite everything that goes on between them.

I liked Erin and Kelly’s story. Erin was an interesting character – she was very guarded and a bit cynical. She saw the kind of guys her sister and mother went through and she doesn’t want that. She sees Kelly like that at first but yes, she starts to let him in a little bit and it scares her. I wasn’t annoyed though or felt that she held onto her misconceptions too long.

And Kelly. Whew! He’s that alpha guy who pushes you out of your comfort zone just enough to make things interesting and he’s sexy as hell. I liked his style. He was very upfront about his desires but he wasn’t inflexible. I thought the sex between these two was scorching and it wasn’t gratuitous at all.

If you’re looking for a super hot but sweet romance, I recommend After Hours. 4 out of 5