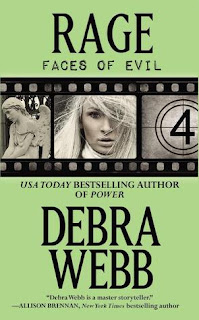 Here’s an excerpt from Debra Webb on her newest book in the Faces of Evil series called Rage that releases tomorrow April 30th!

Disturbing echoes of a Charles Manson massacre disrupt a quiet Birmingham suburb…and a missing child is the only witness. Deputy Chief Jess Harris puts everything on the line when her key suspect is one of Birmingham’s finest. With a killer now focused on her, she must find the missing witness and the truth before it’s too late for them both.

There was so much blood.

Words were scrawled in blood around the walls.

Pig. Whore. Kill the bitch. Kill the pigs. One by one.

The chilly air seemed to freeze in Jess’s lungs as she stared at the other word written in large, sweeping strokes.

She blinked away the images from her motel room that attempted to transpose themselves over those currently burning her retinas. Shaking off the eerie sensation of déjà vu, she visually inventoried the rest of the room.

A massive flat panel television hung over the stacked-stone fireplace. A local morning talk show filled the screen but the sound had been muted. Beefy, well-worn leather sofas stood like sentinels on either side of the fireplace waiting for the family to gather. Windows, blinds tightly closed, spanned the walls. The only natural light breaching the space was from the broken sliding door, its two panels of glass lying in pieces on the tile floor.

Jess shivered again. “What’s going on with the air-conditioning, Sergeant?”

“The thermostat was adjusted as low as it would go,” he explained. “It’s about sixty-two degrees in here.”

“Seems our killer took the time to think things through before taking his leave.” And he or she obviously knew a little something about skewing attempts at determining time of death. Just another reason to hate all those CSI shows.

“I believe the murder was carried out right here,” Harper said as they moved across the room. “The child, a six-month-old boy, was left in his crib in a bedroom. Nothing in the house, as far as we can tell, was disturbed beyond the damaged patio doors.”

After fishing for her glasses, Jess shoved them into place and moved closer to study the placement of the body. The victim lay supine on the tile floor, a pool of coagulated blood around her, her head severed from her body but left right next to the stump of her neck. Tissue was torn in a jagged manner as if the perp had had a hard time getting started with a sawtooth-type tool. Multiple stab wounds along the torso dotted the victim’s pale yellow gown with ugly rusty spots. Her arms were outstretched at her sides, crucifixion style. Legs were straight and together.

Across the victim’s forehead, written in what appeared to be her own blood, were the words PIG WHORE.

Jess stepped nearer and eased into a crouch. She pointed to the victim’s upper arms. “Looks like our killer had a good grip on her at some point.” There was bruising on the chest, just above her breasts. Jess passed a gloved hand over the area. “He held her down while he committed this final atrocity. Judging by the bruise pattern I’d say he was right-handed.”

Harper nodded. “I counted ten stabs to her torso. All postmortem, like the beheading.”

There wasn’t nearly enough blood for the visible damage to have been inflicted while her heart was still beating. No arterial spray from the decapitation. A little castoff from the saw, but that was about it, other than the blood that gravity drained out of the body. In fact, seemed as if the killer waited until livor mortis was well under way before bothering to play psycho surgeon.

Harper pointed to the victim’s hands. “No defensive wounds on her hands or forearms to indicate she fought her attacker. No ligature marks to suggest she was restrained.”

Very strange. Lividity indicated she had been in this position since her death or very quickly thereafter. But why here and like this?

“Could be damage to the back of the head,” Jess suggested. There didn’t appear to be any to the temple areas or the forehead.

“I don’t see any blood matted in her hair close to the skull.” Harper pointed to the long hair fanned around her head.

That was true. Jess rubbed at the wrinkle furrowing her brow with the back of a gloved hand. “Once he’d killed her, what distracted him for so long before he did the rest?” She glanced around the room. Had someone come to the door and interrupted his work? Had the baby started crying and thrown him off balance? The latter wasn’t likely, since the baby was still alive.

“Reminds me of the Manson murders,” Harper said. “I watched a documentary the other night. The anniversary is coming up this weekend.”

Jess had noted that similarity, too, but she wasn’t about to say it out loud. All they needed was the media bringing that kind of connection into this. This case was going to be complicated enough all on its own.

About the author: Born in Alabama, Debra Webb wrote her first story at age nine and her first romance at thirteen. It wasn’t until she spent three years working for the military behind the Iron Curtain—and a five-year stint with NASA—that she realized her true calling. A collision course between suspense and romance was set. Since then she has penned nearly 100 novels including her internationally bestselling Colby Agency series. Her debut romantic thriller series, Faces of Evil, propelled Debra to the top of the bestselling charts, including USA Today, for an unparalleled twenty-four weeks and garnered critical acclaim from reviewers and readers alike. Don’t miss a single installment of this fascinating and chilling series!

Giveaway: We are giving away the entire series!  That’s right –  2 lucky winner will get all 4 books in the series!  Just leave a comment on this post, along with your email address to enter to win. (US/Canada only)

12 responses to “Debra Webb Excerpt (+a Giveaway!): Rage – Book 4 in the Faces of Evil series”