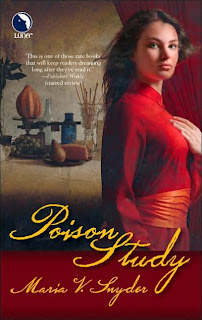 About to be executed for murder, Yelena is offered an extraordinary reprieve. She’ll eat the best meals, have rooms in the palace — and risk assassination by anyone trying to kill the Commander of Ixia.

As Yelena tries to escape her new dilemma, disasters keep mounting. Rebels plot to seize Ixia and Yelena develops magical powers she can’t control. Her life is threatened again and choices must be made. But this time the outcomes aren’t so clear . . .

So Yelena is up for execution because she killed a man. Before she is executed, she’s offered a job as The Commander’s Food Taster, she has to taste his food to make sure there aren’t any poisons that would kill the Commander. She has to become an expert on poisons and Valek takes her under his wing and trains her in the art of poison. She proves herself time and time again to him and the book ends with me hoping to read more in the second book, Magic Study.

I liked this book a lot. I loved seeing Yelena’s character grow in self confidence as the book wore on. I loved watching her stand up for herself and not having anyone fight her battles for her. I loved the friendship that blossomed between her, Janco and Ari. It was genuine and I enjoyed it. I loved how her relationship with Valek progressed throughout the entire story. They went from being very wary of each other to missing one another and then to loving each other. That was great, I got all giddy when Valek told Yelena that he was having criollo sent up to our room…hehe, it was great! The characters were great, the storyline was fantastic and all the espionage and spy stuff had me guessing right up until the last page.

What I didn’t like about the book was that it took a long time for the story to take off. It was slow to start for me but I’m glad I stuck with it. Another thing was Valek’s tests, that man would drive me up the wall, though I thought he was a sexy man with his fierceness in the battlefield. All the tests he put everyone through and how he was so complex, it had me secondguessing him throughout the whole book…that could be a good thing, keeping me on my toes but it annoyed me some in the book. Aside from the slow start and the constant tests, I loved it!

This book is available from Mira. This book was purchased by the reviewer and these are her honest opinions on the book.
Buy the book: B&N|Amazon|Book Depository
Book cover and blurb credit: http://goodreads.com