Welcome to the Too Stupid to Live Blog Tour!

Normally, I’d be throwing confetti around (as in my last couple of blog tours) but this time I decided to go bigger—I’m giving away original artwork. For those of you not familiar with my male genital sculptures (that makes them sound so respectable, doesn’t it?), I’ll direct you here http://annetenino.com/x-rated-crochet-gallery/ to my website, where I’m showcasing the ones I’ve made in the past, and the ones I’m giving away for this blog tour. For those of you dying to win, the details are at the bottom of this post (but really, it’s only polite to read the post first, right?).

On that note, I’ll stop the intro stuff and get on with it.

If you read earlier posts in this blog tour, you know Sam is a character who originally showed up in Whitetail Rock, a free novella that I wrote in July 2011 (available here http://annetenino.com/books/whitetail-rock/). WR is the story of Nik and Jurgen, and Sam is Nik’s best friend, and he has a well-developed role and personality in the story.

Ian first appeared on the scene in The Fix, a short follow-up to WR (available here http://annetenino.com/books/the-fix/). Ian is Jurgen’s cousin, and not to put too fine a point on it, Ian was a jerk. He didn’t get a lot of screen time in the story, but he very clearly came across as prick.

When I began writing Too Stupid to Live in 2011 I had very firm ideas of who Sam and Ian were. Sam and Ian begged to differ, however. In fact, they spent a fair amount of time telling me their story wasn’t what I thought it would be. You see, when I write, I generally start with characters. I have these guys in my head, and they want other people to know their stories (seriously, if they tell you otherwise they’re totally lying), and it’s my job to do so.

However, sometimes problems arise when what they’re telling me happens and what I want to happen aren’t the same. I hate that. We have words at these times (sometimes in places like the pasta aisle at the grocery store, which I’ve noticed is worrisome for other shoppers). But ultimately, it’s their story, so I give in. That’s what happened with Ian and Sam, but mostly Ian.

At first, I thought Ian had dark hair and was really non-communicative in general. Turned out he’s more of a blond, or at least a very light brown (Sam thinks it’s caramel colored). I also thought he was pretty much rude and noncommunicative to everyone, and by the end of the book he would be a nice guy to Sam, but pretty much only to Sam.

Nope, not the way it went down.

Back then, I also had a very different plot in mind for Sam and Ian. I originally thought that—because Ian was so lame and had “issues” to work through—they’d break up in the beginning-middle of the book, and the rest of the story would be about Ian and Sam finding their way back to each other.

Well, no. That didn’t happen either.

Here’s a small excerpt from that original plot (plus a note to myself), but let me be clear—this does not happen in the final version of Too Stupid to Live and it has no relationship to the things that actually occur between Sam and Ian. I’m mostly pasting this in to show you how big a tool Ian 1.0 was.

“Sam, if I were your friend, I wouldn’t want you seeing a bastard like me.”

“If you were my friend?” Sam choked out a short laugh. He pretty much only got out one ‘heh’.

[They’re at Ian’s place when he dumps Sam.]

“I’m going out for a bit. Maybe you could…,” Ian made some useless gesture with his fingers, standing in the open doorway. “Just get your, uh… stuff out. I’ll give you two hours.” He wouldn’t even look at Sam.

Then Ian shut the door behind him with a click.

It was the most humiliating, soul-destroying noise Sam had ever heard. It echoed in his heart over and over while he wandered around the house, grabbing occasional things that came across his path. He was pretty sure they were his.

By the time he got to the bedroom, his chest ached so much he was sure he was having a heart attack. He saw his underwear lying on the floor. Sam picked them up, threw them and the rest of the shit he was carrying in his backpack and got the hell out.

He was halfway home before he realized he wasn’t wearing shoes.

Yeah, so Ian? He was a loser. But after almost nine months of writing (which got scarily like being pregnant), I’m happy to report Ian’s not a complete ass. He’s kind of a jerk in the beginning, I’ll admit, but he changes fast, and their relationship ended up being very different than I expected. Much better than I’d hoped, actually.

In the end (also much like being pregnant), I was happy with the result, and where Sam and Ian ended up. But if you need more convincing, let me entice you with the blurb: 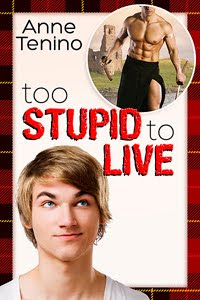 Too Stupid to Live Blurb

It isn’t true love until someone gets hurt.

Sam’s a new man. Yes, he’s still too tall, too skinny, too dorky, too gay, and has that unfortunate addiction to romance novels, but he’s wised up. His One True Love is certainly still out there, but he knows now that real life is nothing like fiction. He’s cultivated the necessary fortitude to say “no” to the next Mr. Wrong, no matter how hot, exciting, and/or erotic-novel-worthy he may be.

Until he meets Ian.

Ian’s a new man. He’s pain-free, has escaped the job he hated and the family who stifled him, and is now—possibly—ready to dip his toe into the sea of relationships. He’s going to be cautious, though, maybe start with someone who knows the score and isn’t looking for anything too complicated. Someone with experience and simple needs that largely revolve around the bedroom.

Until he meets Sam.

Sam’s convinced that Ian is no one’s Mr. Right. Ian’s sure that Sam isn’t his type. They can’t both be wrong . . . can they?

And now comes the point in the blog post where I ask you the magic question—the one that may lead to you owning your very own crocheted cock sculpture. But first, let’s go over the contest rules, such as they are:

I’ll be giving away one crocheted cock per post; please include the question you’re answering in your email so I know which post it is.

Winners will have to provide me with a mailing address to send the penis to after I notify them by email (about January 21st).

There are no geographic restrictions on winning—I will send anywhere in the world, even to countries in which customs may confiscate the item (although if it doesn’t make it, I won’t be able to provide a replacement, I’m sorry).

Winners will be chosen randomly from each correct answer I receive by January 20th. That’s two days after the blog tour ends. 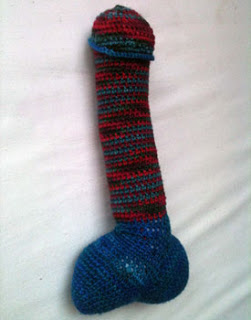 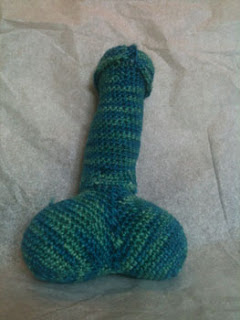 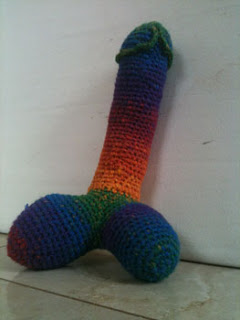 To win, correctly answer the question below in the body of an email sent to me at anne @ annetenino.com.

What does Sam sometimes think he’d rather do than finish his MFA in Writing?

About Anne Tenino: Raised on a steady media diet of Monty Python, classical music and the visual arts, Anne Tenino rocked the mental health world when she was the first patient diagnosed with Compulsive Romantic Disorder. Since that day, Anne has taken on conquering the M/M world through therapeutic writing. Finding out who those guys having sex in her head are and what to do with them has been extremely liberating.

Anne’s husband finds it liberating as well, although in a somewhat different way. Her two daughters are mildly confused by Anne’s need to twist Ken dolls into odd positions. They were raised to be open-minded children, however, and other than occasionally stealing Ken1’s strap-on, they let Mom do her thing without interference.

Wondering what Anne does in her spare time? Mostly she lies on the couch, eats bonbons and shirks housework.

Check out what Anne’s up to now by visiting her site. http://annetenino.com

Tracy: Thanks so much for stopping here on your blog tour, Anne.  Love the crocheted cocks!

6 responses to “Guest Author (+ a rockin’ giveaway): Anne Tenino – A Matter of Character”