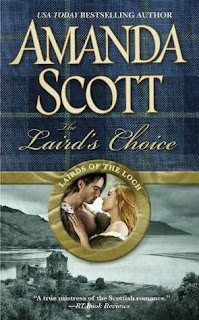 Judith’s review of The Laird’s Choice (Lairds of the Loch, # 1) by Amanda Scott.

DUTY BOUND . . . Lady Andrena MacFarlan has been different since the day she was born. Possessing the power to sense others’ most intimate desires, she knows her duty is to marry the man who will take the MacFarlan name as his own and help her father regain the chiefdom of their clan. But her unique gifts don’t prepare her for the day when a mighty warrior suddenly enters her life. The attraction between them is undeniable — and insatiable.

DESIRE UNLEASHED . . . Hunted by brutal enemies, the wounded Magnus Galbraith washes up on MacFarlan land where he is rescued by a laird’s lovely daughter. Andrena is like no one Magnus has ever known. She has the uncanny ability to both calm and enflame him in ways he never dreamed possible. But she has other unknown-and dangerous-powers. Now, as Magnus seeks to avenge a brother and protect a king, the young beauty could prove his greatest ally-or his ultimate undoing
I have read other novels by Amanda Scott and have, for the most part, really enjoyed them.  All of them have been well-written, meticulously researched, and based on sound historical reality.  However, in the case of this novel, I think whoever wrote the above blurb was exaggerating a bit.  First, the heroine certainly did possess “gifts” that were beyond the norm–she had an uncanny and unexplained ability to sense trouble, to “read” people’s emotions and to perceive when they were speaking truthfully.  She did indeed have an unusual relationship with the wildlife that lived around her family home, a relationship which, according to the Prologue, began when she was a two-day-old infant.  She also was instrumental in saving Magnus’ life when he was fleeing from those who had taken him into captivity 19 months earlier as a part of the spoils of war.  It is, in my humble opinion, an overstatement to infer that their initial meeting was fraught with sexual attraction and that “sparks flew” when they were together.  I think the text will support the fact that there was an attraction that made it possible for them to both accept the possibility that Andrena’s father would want Magnus for a son-in-law, one who would strengthen the ancestral line as well as strengthen his claim as rightful Laird of the Clan Farlan.

I think it is accurate to say that Andrena was unlike any woman Magnus had met, and I think their wedding and bedding was most pleasant for him.  After all, she was beautiful, intelligent, obviously held in high esteem as the oldest daughter of the Laird and one who would eventually be instrumental in bringing him power and wealth.  He had been held as a galley slave for 19 months so taking a beautiful woman to bed was not something to which he objected.  But as fulfilling as their physical relationship may have been for him, the story will more accurately support the fact that Andrena felt cheated, unfulfilled, emotional left high and dry.  So to say that their relationship was “insatiable” was again, a bit of an overstatement.

All that being said, the story certainly educates the reader as to the stresses and strains in the politics of the time.  The Scottish clans were known for their power games and internal struggles.  It was no secret that they were a thorn in the side of the English and no true Scotsman had any love for the English to begin with.  It is also well documented that James I had his hands full bringing a stable governmental style built on laws and courts of justice not only into being but having the fortitude and ability to maintain over the years.  He was a rare monarch who deeply loved his queen and to whom he remained faithful.  The novel is really heavy on the “historical” side and so  much so that the “romance” aspect almost gets lost in the crisis, the strategizing, the plots and counter-plots.  Magnus and Andrena were certainly together during those events and Magnus came to recognize that her people skills and her uncanny perception were an added blessings when negotiating alliances and such.  But I never really had the sense that the romance was front and center, and perhaps that says more about me than anything else.  I know that the historical events were meant to be the context rather than the main focus.  Yet there were times that the history was so violent, the political tension so evident, that the low simmer between Magnus and Andrena took back seat to the action.

All in all, it is a very educational book and one I had no trouble reading.  But for those who like the romance better than the history, this will not be an easy book to read.  I found it a valuable reading experience because I like books heavy on the historical context.  But at times I would have liked Magnus and Andrena to heat up the sheets just a bit more or for Magnus’ emotional control to slip just a bit more and sooner than it finally did.  When all is said and done, this novel is a fine piece of historical romance fiction and will certainly find its place with those who really love this kind of romance novel.

This book is available from Forever. You can buy it here or here in e-format. This book was provided by the publisher for an honest review.