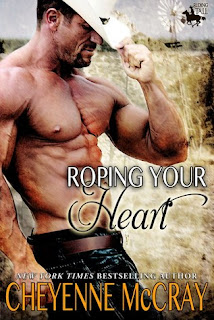 The Cat Hayden returning to her childhood home after nineteen years is a different person, and a tragic accident has left her insecure about her appearance. But her heart is still filled with memories of the love she left behind… Blake McBride.

Blake recognizes Cat with his heart, a heart that never stopped loving her. But that heart was broken when she left so long ago. Can he trust her again and rekindle that flame that burned so strong?

A champion barrel racer before the accident, Cat finds herself instructing Blake’s talented yet temperamental fourteen-year-old daughter, Demi. Demi is determined to see her divorced parents find happiness together and Cat, great coach or not, doesn’t fit in the picture.

During a bitter legal battle with his ex-wife, Blake stands to lose custody of his daughter. Cat stands by her man but can he fight for his daughter and keep the woman he loves or will shattering events tear them apart…. Permanently.

Here comes another of those sexy McBride brothers only this guy is settled, has his own spread and is raising his 14 year old daughter to be a lover of horses, just like everyone in the McBride Clan.  He has been living as a bachelor for 8 years since his wife up and left him, addicted to drugs and alcohol, and completely unfit or unwilling to care for their daughter or be a ranch wife.  Not enough playtime, too much work, too much responsibility.

Into their lives comes Cat Henderson, a ghost from Blake’s past, his first and most intense love, a woman who couldn’t face staying in Prescott with her drunken abusive father while Blake couldn’t face leaving Prescott, even for the woman who held his heart.  Now 19 years later, both recovering from failed marriages, Cat and Blake find themselves reunited when Blake comes to pick up his daughter from her 4-H Club meeting only to find out that the horse riding instructor is his long-lost first love.  Blake is even more surprised when he discovers that Cat is his new CPA and will be working with him to help him survive an IRS audit.  It seems like fate has not only brought them together but slammed them in each other’s faces.  There are still some tough going ahead for these two when Blake stands to lose the daughter who is absolutely impossible to live without, and Cat faces her determination to remain with her grandmother who is terminally ill and thus can’t leave Prescott.  Once again these lovers face a situation that may once again thake them out of one another’s lies.

This is a very intense story–one that really doesn’t let up almost from the first.  It is a book that is rooted in the real dynamics of relationship, with disappointment and loss, the joys of renewed love that have a double edge to it, and the difficulties of raising a teenage daughter who really wants to see her parents reunited.  At the core of it all is a love that just couldn’t die in spite of time of distance.  I think those who love cowboy romance will find this a fun and satisfying read.  Those who are Ms McCray’s fans already will be delighted in her newest work, and those who are just discovering her will certainly be glad they did.

I give this story a rating of 4 out of 5

This book is available from Pink Zebra Publishing. You can buy it here or here in e-format. This book was provided by the publisher for an honest review.