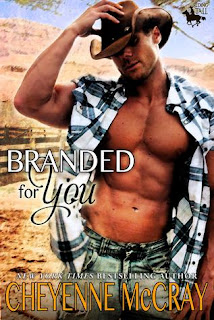 Megan Wilder doesn’t think there’s a man in this world who could love her just the way she is. After meeting sexy Ryan McBride, she suspects he might just be the one to change her mind.

With her family in danger of losing their restaurant and their home, a sudden illness has everything Megan thought was sure in her life crashing down around her. Finding out Ryan is the one responsible for threatening foreclosure shakes her very foundation.

Can Ryan and Megan succeed in overcoming their obstacles and fight for a love that was meant to be?

Having read Ms McCray’s “Rough and Ready” series in recent months, I was delighted to find this first book in a new series about an Arizona family living in Prescott, AZ.  The McBride brothers are handsome and sexy, absolutely in love with the land and with the family ranching tradition.  They were loyal and caring for one another and their family.  When Megan Wilder encountered Ryan, she met a man who was unlike anyone she had ever met.

Megan Wilder was like many women who felt like a failure when held up against the stick women who are the fashion icons of modern society.  To her parents she had always been too fat, to the kids in school she had become the frequent target of unkind comments about her size, and now her ex-husband had left her for another woman who he declared wasn’t ” . . . fat like you.”  No wonder leaving New Mexico wasn’t a sad prospect, leaving behind a man who she had hoped would be her haven and her support and would love her as she was.  Now she is headed for her parents’ home in Prescott, Arizona where her parents had purchased a new restaurant and where she was hoping to establish her own home and continue her graphic design career.

Needless to say, Megan was very tentative when she first realized that Ryan McBride had attraction to her, wondering if she was in for more of the same as with her ex, waiting for the “other shoe to drop” when Ryan was being so kind and accepting of her, actually acting as if she was beautiful and sexy.  This story is really about the inner fears that so often cripple individuals, fears that are often left over from the cruel and unthinking remarks of family and friends, and those fears are the result of deep wounds that sometimes fail to ever heal.  This is also about the evils of greed and avarice that cause damage to innocent people, whose lives are turned upside down and can even been destroyed.  Once again Ms McCray writes about the need for trust and the power of love–the genuine, authentic kind of love–that can build trust and overcome the fears of the past.

This book was a very satisfying read for me because I can identify with Megan’s awareness of family and the ways that old memories and old habits can engender fear. In my professional life I often come across people whose entire future is put in jeopardy because they can’t seem to move past the hurtful, judgmental remarks from those who we ought to be able to trust to love us unconditionally.  It is a story wherein that love and trust are put to the test and where a future filled with kindness and caring is called into question.  I also think there is an aspect of this tale that proves once again that it isn’t always what you know but who you know that can make a critical difference.

So if you like cowboy romance you’ll certainly like this new series of stories from an author who knows how to keep her readers happy with good romance fiction.  If you haven’t read any of Ms McCray’s work you are in for a treat.  She is rapidly becoming one of my favorite writers and I am always delighted when I discover her newest effort.  This story really deserves to be read and appreciated.

This book is available from Pink Zebra Publishing. You can buy it here or here in e-format. This book was provided by the publisher for an honest review.

One response to “Guest Review: Branded for You by Cheyenne McCray”